Tyne Morgan
March 12, 2020 03:56 PM
One Year Later 031220
Busted grain bins still sit outside of White Cloud, Kansas. The rotting grain is a reminder of how devastating the flood of 2019 still is for farmers, landowners and residents. ( Mike Byers )

It’s been one year since the bomb cyclone hit. The historic storm system dropped two feet of snow in the Plains and Midwest and several inches of rain, which wasn’t what an already elevated Missouri River needed. The bomb cyclone system the catalyst for massive flooding in March, impacted Nebraska, Iowa, Missouri and Kansas. A year later, while so much has changed, there’s lot that hasn’t, as the devastation still stares farmers, landowners and residents in the face.

“When the water got about 10 to 12 feet up on the side of the bin, it got water inside and in the grain, because the grain to swell, and it just popped the bin wide open,” explains Travis Green, a White Cloud, Kan. farmer.

The scene today is dramatically different than a year ago. While the water is gone that surrounded the grain bins last March, the devastation isn’t. His grain bins are gashed wide open, with rotting grain pouring out. 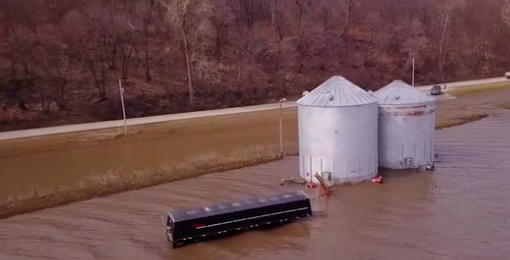 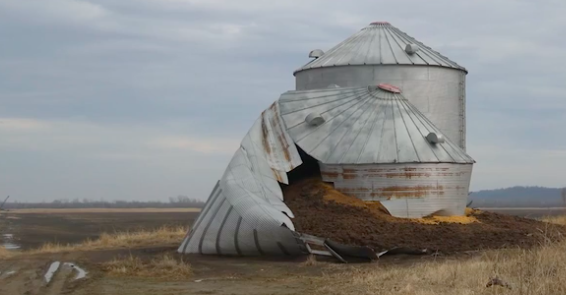 Above was the difference in one year. The top picture was last March, and the bottom photo is the same set of grain bins today.

Green says the Missouri River created a total loss on that farm field. Not only did he not get to turn a wheel on the productive ground, he didn’t have time to get his grain out of the bin; grain that was from his 2018 crop and had already been priced, and a loss insurance doesn't cover.

“I didn’t have very much notice,” explains Green. “That wall of water came down, and it took right over.”

Green says the Missouri River rose too quickly, and he had no notice to get his crop out. The night before the floods hit, he says there was about 4 feet of water from where the Missouri River was sitting and the top of the levee. By the time he got there the next morning, the water hadn’t just topped the levee; the River rose two feet above that.

As Green turns his focus to 2020, the recently flooded farm field will probably not get planted again in 2020.

“This farm here we probably won’t plant, which is going to hurt,” he says.

Green fears he won’t get a crop in this year due to the levee. While the Missouri River is relatively low to where it had been, the local levee still isn’t fixed.

“50% of my farms were underwater and remained underwater until mid December,” says Meyerkorth who farms outside of Rock Port.

Fortunately, he didn't lose any of his grain storied in bins. He says his family worked consecutive days without any sleep, just to haul grain out of the bottom ground.

2019 was a year Meyerkorth would like to forget, and he says it all started with too much moisture and then the bomb cyclone.

“2019 was a rollercoaster year, because we started the year wet,” he says. “Then the rainfall just kept happening, but also in March is when the bomb cycle hit in Nebraska. So then we got to receive all that water from that event, and we just started the year off with a bang. It was one difficulty after another.”

The Missouri farmer didn’t just battle the flood, but he also lost his father to cancer. Now as he tries to turn the page on 2019, he’s preparing to possibly not farm some of his land again.

“It’s a battle,” he says. “We've had an open winter, so we've been able to get onto a lot of the land and start the process of recovery. Just within the last few days -  until with this rain yesterday - we've been able to start trying to conquer some of the battles we faced with everything from flood debris to sand to levee repair and ditch cleanup.”

Levees still breached in his area means land is exposed to even the slightest rise in the Missouri River.

“Just along this system here were eight breaches,” says Meyerkorth pointing across a 15-mile stretch.

He says current estimates point to a project that could coast more than $80 million in repairs. Meyerkorth says that’s just one area that saw levees overtopped by water. In total, he says 56,000 acres in Atchison County, Mo. alone were under water last year; flooding that didn’t subside on some of that land until December.

6 Things To Check Before You Switch Corn Maturity

Is Another Wet Spring in Store?

EPA Yet To Decide On Retroactive Refinery Waiver Requests: Senator
2

Is China Living Up to Phase One Trade Agreement Obligations?
3