It’s a serene setting this time of year. Amber waves of grain surround these mountains as combines are starting to move through the harvest-ready golden fields in the Pacific Northwest.

“This is day two,” says Kevin Duling of KD Investors in north central Oregon, while he was in the field harvesting. “We started yesterday afternoon.”

As harvest kicks off, Duling says this year’s crop is coming out of the field right on time.

“We usually started right aim for the 15th of July,” says Duling. “Moisture levels were consistent saying we should have started right now.”

The Pacific Northwest is home to field after field of soft white wheat. A crop that – this year- is coming in surprisingly strong.

“The stuff we're cutting right now basically got half of the average precipitation for the year, we just happened to have it in May and June,” Duling explains. “It was cool, so we're dealing with good yields good quality, but there were some freeze pockets that got damaged that were irreversible.”

It’s a similar story playing out in Montana. Michelle Erickson-Jones says combines aren’t working through these wheat fields yet, but hopes are high for a bountiful harvest

While hopes are high for a solid crop, wheat in Montana has its challenges.

“Our biggest issue has actually been grasshoppers,” says Erickson-Jones. “I have heard further to the south, as you get closer to the Montana and Wyoming border, they’re an even bigger issue down there. It's been a long time since we've had significant issues with grasshoppers, but they're definitely an issue this year.”

Farther south in Oklahoma wheat harvest is coming to a close, but weather worries seemed to linger this year, as late-season freezes in May put a damper on this year’s crop.

“We also had a freeze in the first week in May,” says Sherri Gamble, a wheat grower in Beckham County, Okla. “It was devastating, not totally devastating though. We are cutting it and it's yielding decent.”

The Gambles are now wrapping up wheat harvest, and they aren’t alone. USDA says farmers in 10 states are either finished or beating the average five-year harvest pace. While 8 states show wheat harvest lagging. 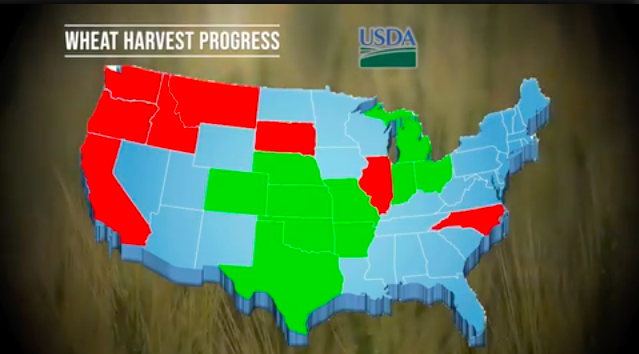 As for crop conditions, USDA says 68% of the spring wheat crop is in good to excellent shape, down twp percentage points in a week. 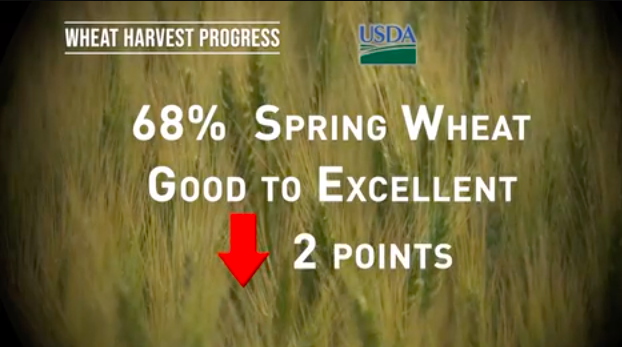 “That's what makes wheat so interesting” says Chandler Goule, CEO of National Association of Wheat Growers (NAWG).  “We are harvesting or planting literally year-round, unlike corn and soybeans and our other commodities.”

All Eyes on Trade and Markets

As combines roll, the wheat market saw excitement last week. Prices shot higher on rumors China might be in the market for U.S. wheat again.

The news of China buying more wheat came on the heels of a big wheat purchase the week prior.

“They did make 130,000 metric tons and 190,000 metric tons purchases at the end of last week, and so they are beginning to pick up, but we are still lagging behind where we should be,” Goule adds.

The NAWG CEO says exports during this calendar year are still trailing by about 20 million bushel, and wheat growers are hanging onto hope that recent buys are just the start.

“If they would fulfill their tariff rate quota, and we maintained a pre-2018 market share, they would easily be our number one customer,” says Erickson-Jones. “It's a huge market and a huge potential. They're the number one consumer wheat in the world.”

As the Trump Administration searches out more bilateral trade deals, it’s countries along the Pacific Rim still holding the most potential.  Withdrawing from the Trans Pacific Partnership (TPP) is still a sore subject for Erickson-Jones.

“In Montana, we export nearly 80% of our wheat and a lot of it goes back to TPP was an important deal for us,” she says. “It is still something that is important for us.”

“You're talking about $4.43 cash is what it was a couple days ago,” says Erickson-Jones. “That's not that's not really a profitable price for most farmers.”

“They only included hard red spring wheat, and that was only if it wasn't forward contracted,” says Erickson-Jones.

“Hard red winter, which is clearly our largest class and soft white, which is big in the Pacific Northwest, were completely left out of this program,” says Goule. “We were hoping that we would be included in this second round of commodities, which turned out to be predominantly specialty crops.”

NAWG made a case to UDSA about why the futures price doesn’t translate into prices producers are seeing on a local level, but USDA still didn’t include all of wheat in the latest CFAP announcement. Goule says while the ship has sailed on help with the 2019 crop, he’s hopeful future programs will include wheat, and Congress will possibly step in to help build a better safety net for wheat.

Co-op: We’ll Have A Place for Producers to Take Grain This Fall

USDA Report Could Show How Much Corn Is Used for Feed

A Look Behind the Seed Scene
2

Can Conventional Keep Up?
4