Weather Models Show Improved Chances for Moisture in the Midwest

Growers in the Western Corn Belt got some moisture relief over the weekend, but some areas are still waiting on the rain. As the market turns its focus to weather during the growing season, U.S. Farm Report meteorologist Mike Hoffman says the two main weather models he watches are telling different stories right now.

Hoffman says the root zone moisture map has changed dramatically over the past two months. He says then, nearly the entire middle of the country was blue, indicating plenty of moisture.

“There have definitely been changes in the overall pattern,” he says.  The blue expanded over the Carolinas, mainly because of that storm that sat over that area for the whole week last week. But it's still blue from the western Great Lakes down into Arkansas and some of the surrounding areas, but it has turned dryer rootzone in Western Texas all the way up into western Kansas and then back through many parts of the West.”

Hoffman says the drought monitor shows the driest areas continue to be southern Colorado, northern New Mexico and some of those surrounding areas in southwestern Kansas, western Oklahoma, northwest Texas.

“Those are the areas of real concern,” says Hoffman. “When you start to get a drought like that, it can sometimes just keep expanding outward, and you end up with very little moisture in this area to give nearby places some rain so we'll be watching that closely.”

Hoffman says this week poses the opportunity for more chances of rain in the Corn Belt. He says a cutoff in the Southeast has shifted away, which was causing the Midwest to miss any chances of moisture. 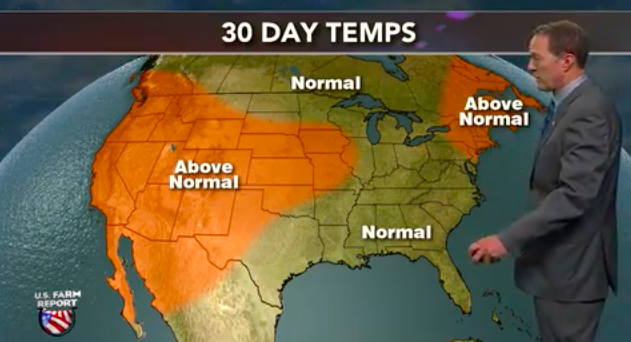 “The 30-day outlook for temperatures looks to be above normal in the Northeast, then from Kansas and Missouri heading westward looks above normal.”

Hoffman says the rest of the country is shaping up to see near-normal temperatures over the next 30 days. 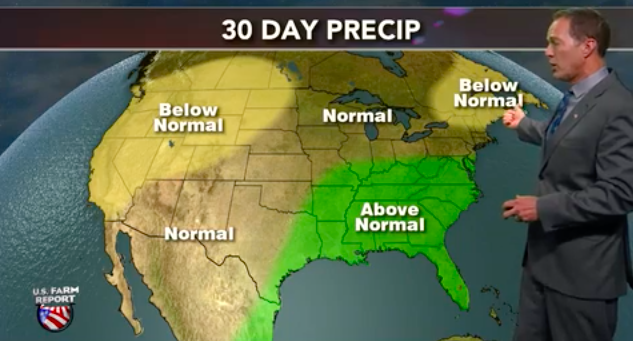 “For precipitation, the models show above normal from the Ohio River Valley to the Gulf of Mexico and below normal  in the Northeast, northwestern Plains and most of the West.”

Weather Will Be a "Mixed Bag" This Week

Fulfilling the Promise of Immediate Availability of Crop Tour Data
4

Harvest in a Hurry
5