“I started having my seed tested independently because I wanted to truly know if it would be ready for tough conditions. I want to be a better steward of planting,” says Terry Wellmann. ( Wellmann Farms )

On a southcentral Minnesota morning, Terry Wellmann walks 30 acres of near knee-high corn, shotgunned from above by hail damage the previous evening. In the ditches around his fields, ice remains insulated and over 1’ deep in spots, refusing to melt even in mid-June at 8:30 a.m., as Wellmann moves between the rows, eyeballs the hammered stalks, and shrugs at one more body blow in a year of extremes. Incessant rain, soggy ground, and cold temperatures have already unleashed stress hell on his corn seed. What’s a little hail at this point?

In May 2019, when Wellmann plucked samples from each corn hybrid and drove the seed two hours west for testing in South Dakota, he picked a benchmark planting season to have his seed examined at an independent lab. The data is spot-on, he contends, particularly in a year packed with weather woes and super-stress for seed. Wellmann’s hybrids are performing at levels matched with the lab tests: “It’s great to see how most of the data lines up with what the seed companies specify, but it’s not a good feeling to find some that don’t correlate and that’s got me scared for next year, because nothing is going to be thrown away; it’ll sometimes get integrated. There is no guarantee we won’t have another wet and cold spring in 2020.”

On roughly 1,000 acres of ground outside Hanska, in Brown County, Wellmann, 45, grows corn and soybeans. As with seemingly countless growers in the Midwest, Wellmann’s planter rolled late. He punched corn seed May 15, initially in relatively decent conditions, with stop-and-start progression until planting was completed June 5: 21 hybrids spread across 600 corn acres. (Prevent planting claimed 10% of Wellmann’s acreage.) As he hit emergence (roughly May 26-27) and began accumulating growing degree units (GDUs) at a paltry rate of 5 per day, the ground was cold and wet—a recipe for trouble that turned his fields into a seed stress laboratory. 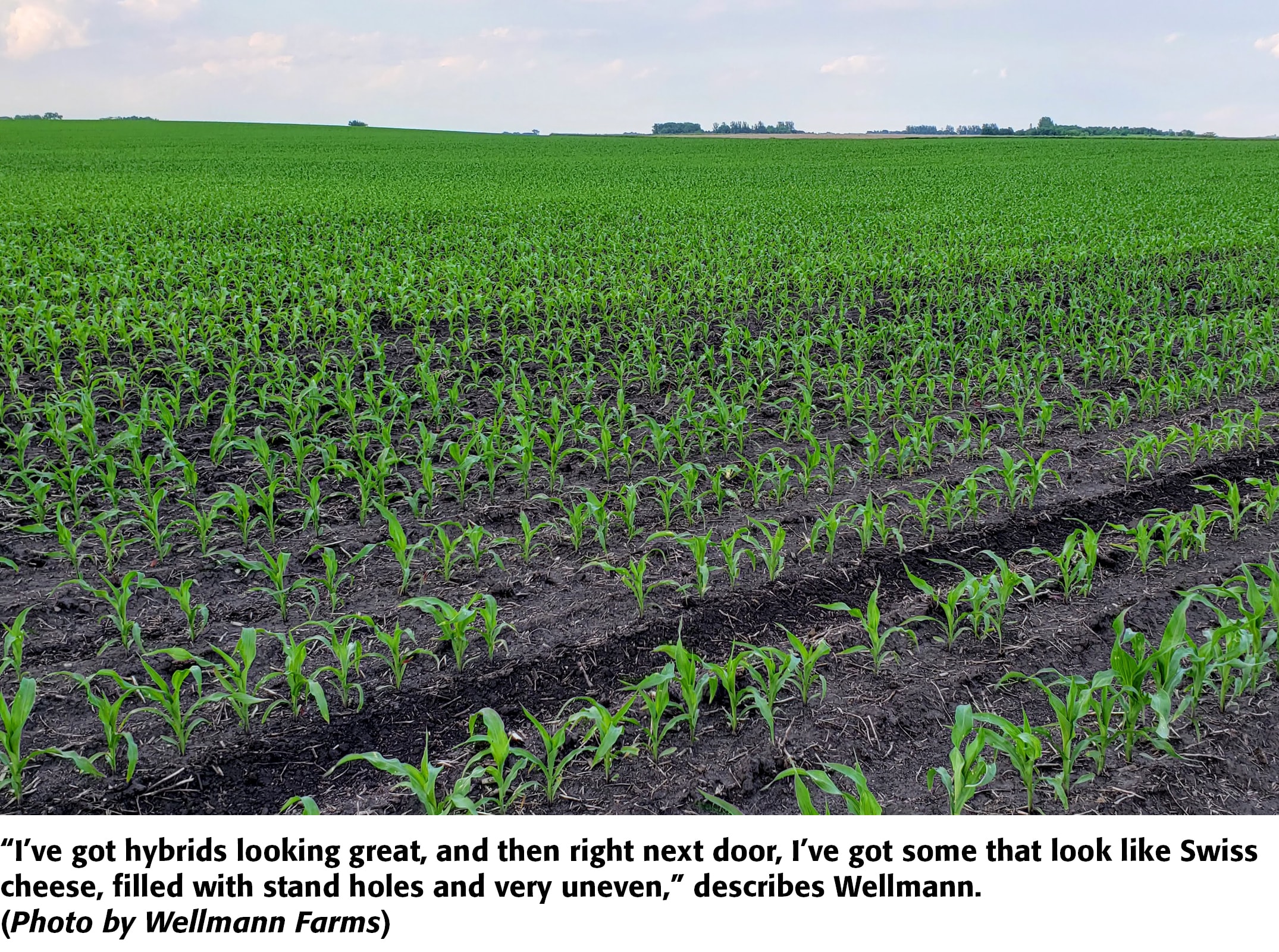 Prior to planting, Wellmann delivered corn seed samples (200 seeds per hybrid for saturated cold tests) to SoDak Labs in Brookings, S.D., to ensure he knew the precise characteristics of each hybrid planted into particular acreage. “I started having my seed tested independently because I wanted to truly know if it would be ready for tough conditions. I want to be a better steward of planting,” Wellmann explains.

Seed testing data can serve as a placement guide, he adds. Ground that is colder or wetter may be conducive to a hearty hybrid, while ground with better conditions may be home to a racehorse variety. “I don’t want to just pick with a seed guide; I want the data to remove as many questions as possible and give me something concrete to go on.”

“Generally, SoDak can do cold-germ testing and tell you which samples are normal and which are abnormal, but SoDak breaks down another category on the normal ones and shows which are slow emerging and lag behind,” Wellmann continues. “A lot of times, when you see integrated seed, you start seeing emergence issues and plants that lag behind. You don’t know it without the tests.”

Two weeks after taking the samples to SoDak, Wellmann received the “eye-opening” results. “I had some hybrids come back with impressive, as-advertised numbers, but I also had hybrids come back at 45% dead, and that’s just a cold-germination test at seven days at 50 degrees, and then warmed up to 80-90 degrees for three days. Yet, all the seed passed company-testing at 95% on warm-germination tests.” 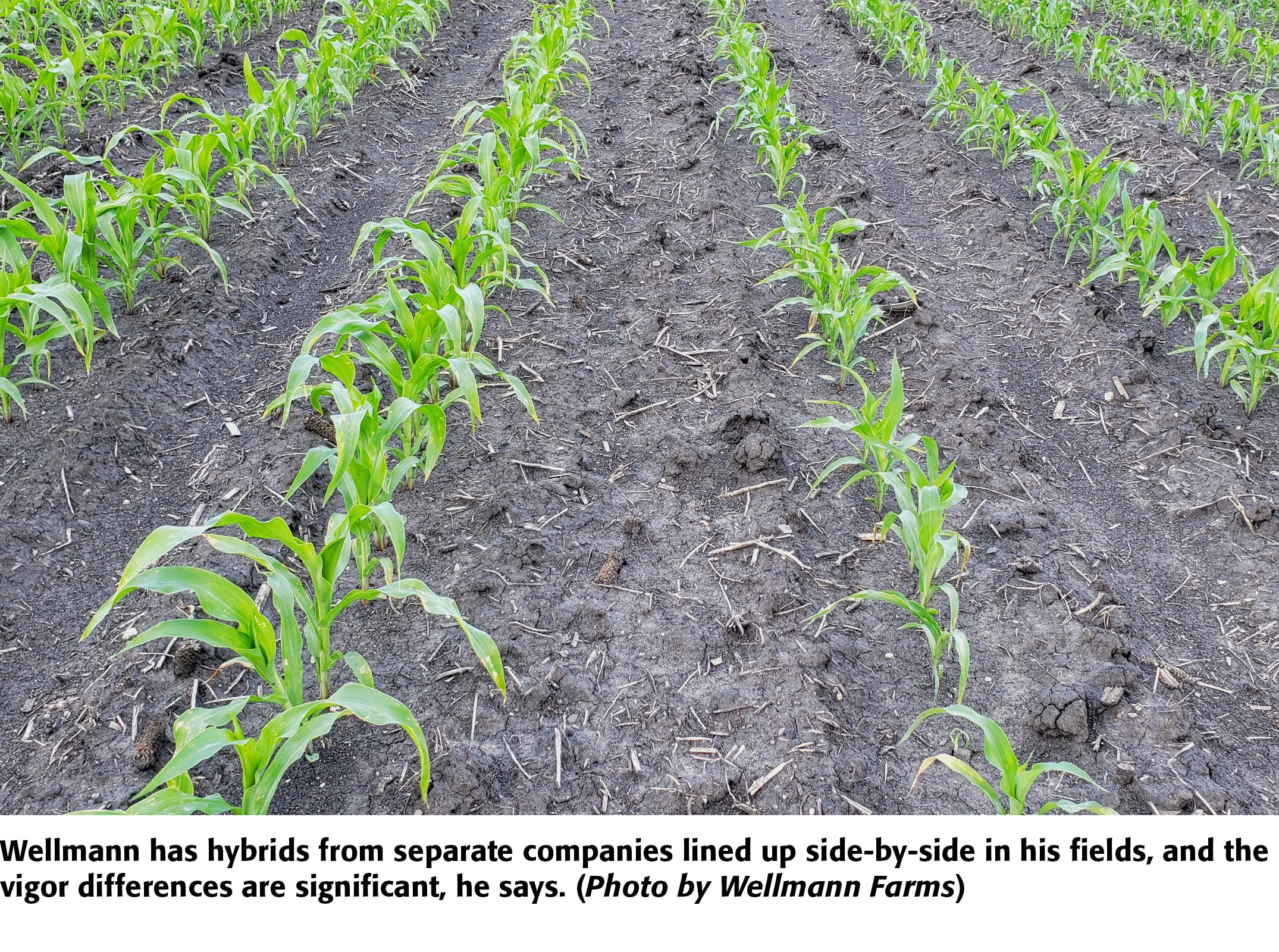 Under optimal planting conditions, the numbers have minimal consequence, but under stress? Under 2019 stress? Data in hand, Wellmann performed a flag test on each hybrid, watching and monitoring emergence. The fields began to perform along a trajectory traced back to the seed test data, he notes: “I saw a very strong correlation between how the seeds test for stress relative to emergence. All year long, some seed companies talk about what you need to do for good emergence and a good stand; the key principles of a picket fence. But when things get bad, like this year, I’m told it’s not really that big of a deal and uneven is not really that bad.”

“Right before my eyes, by the day, I’m learning like never before that the quality of seed makes a big, big difference. Sometimes when things go bad you can point at a guy planting into wet, compacted or non-optimal conditions, but there are also times when it’s the seed’s fault, and the high rating and early-season vigor just isn’t there. Nobody wants to say that, but that’s the way I see it.”

Yet, rejecting seed is not a simple decision. “I had bags I opened to test the varieties. I didn’t plant them because either the tests came back as too poor, or my acreage shifted due to weather. I rejected some seed that was really bad, but even that was a struggle. Once you reject seed, what do you get back? The stuff left around the warehouse? It’s quite a challenge and you have to be careful what you wish for.”

With the scramble and uncertainty around corn planting in many states, seed returns will echo during 2020 planting, Wellmann fears. “It’s another reason that highlights the importance of testing. The seed that gets returned is coming back at us in some form, sometimes integrated and that’s where the poorest quality might be. The bulk boxes scare me; it’s convenient, but it’s a great way to cover poor seed.”

Wellmann has hybrids from separate companies lined up side-by-side in his fields, and the vigor differences are significant, he says. “I’ve got hybrids looking great, and then right next door, I’ve got some that look like Swiss cheese, filled with stand holes and very uneven. It’s all matching up with the test results and that’s going to make me extra wary when it’s time to order seed. I don’t want anybody to rush me before the combine even rolls and try to get me buy seed for the upcoming year.”

Almost 175 miles east of Wellmann, Tony Heiden grows corn (along with hay and beef cattle) in Winona County, in southeast Minnesota—30 miles from Wisconsin and 30 miles from Iowa. Heiden, 45, planted eight hybrids across 600 acres in May. Short on sunshine and heat, Heiden’s stand differences are clearly visible, he notes. “Stress is definitely going to be a high consideration when I choose seed next year, and that will help me remove one more variable from the equation that might prevent me from having more stand issues.” 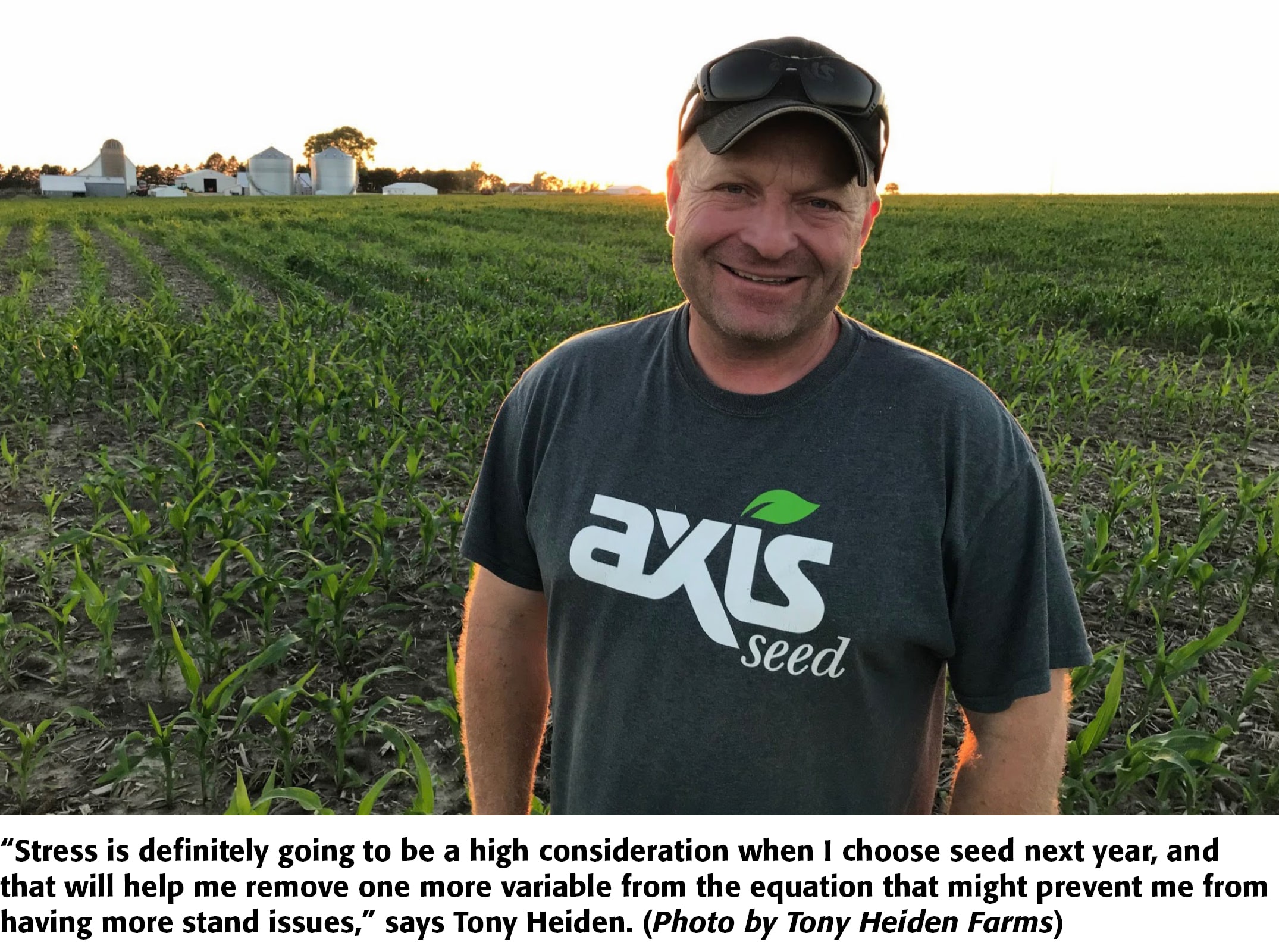 Testing data is a big factor for Heiden, although he doesn’t use an independent lab. “My seed company allows me access to testing results and I pay a high amount of attention, especially in a year like this.”

Seed quality data and seed sizing rank high on Heiden’s list of key considerations: “I have to look at anything and everything to avoid issues down the road, and if a hybrid can’t handle stress well, it’ll affect my livelihood. That’s how important the test data is, and I feel you need to pick the best of the best.”

Despite the difficult 2019 growing conditions faced by Wellmann in Brown County, he emphasizes considerably worse weather faced by other farmers in other counties and states. In those areas of the U.S., seed quality issues are amplified, he says. “In my region and others, I don’t think farmers are doing their due diligence on seed testing. I wish guys would take more notice of testing and not just throw seed out there and take what you get.”

At approximately $25 per sample, Wellmann paid under $1,000 on testing in 2019, an expense he considers money well spent. “It’s invaluable data for a minimal investment, and helps point you to where you should plant—matching seed to ground. When I have a problem, is poor quality seed a possibility? Any crop problem can be blamed on environment or the farmer, but now I’ll know all the possibilities.”

As a facility testing for seed quality, traits and genetic purity, SoDak Labs works primarily in the corn and soybean industries, handling samples from across North America, including Canada and Mexico. Individual grower tests generally stem from two types of motivation, describes Tim Gutormson, a seed physiologist and CEO of SoDak. One motivation relates to precision agriculture, planting populations and the search for every ounce of available data. A second impetus comes from risk mitigation—growers who want to start planting as early as possible: “They evaluate corn to see which lot is the best for the toughest situations they may encounter. This lot; this field; this date; and that mitigates risk. Generally, growers test seed because they want additional information, and not because they lack confidence in a seed company.”

Typically, SoDak runs two types of cold-vigor tests, tray-cold and saturated-cold (both at 50 F). Tray-cold testing mimics good field conditions (50 F soils at planting depth and dry soil surface) using a sand-soil mix at 70-80% water-holding capacity. Saturated-cold testing is conducted under very stressful conditions, with extremely wet conditions and very low oxygen levels, almost anaerobic. “In corn, most of the time our tests match company tests because the seed corn industry has fine-tuned production, handling and conditioning practices,” Gutormson says. “However, there are some hybrids that are super high-yielding that may lack the cold tolerance vigor, and that’s where risk mitigation comes in. A farmer may want to use that high-yielding hybrid and he’ll want the details so he can manage it right.”

“I don’t see farmers rejecting seed based on our tests, but rather using them to place lots in different fields and conditions. Farmers should feel confident in seed companies, but additional testing may help you fine-tune your operation,” Gutormson adds.

When contacting seed labs, Wellmann urges growers to ask how potential testing results can affect a given operation. What should a grower test for and why? What data does a grower need to know, particularly in tough weather years?

When Wellmann reached out to SoDak, he had no inkling he was nearing one of the worst weather years of his career. “The timing was perfect in my case. I’d say nine out of 10 years all is well and you never really know what degree of seed you have. Then you hit that major stress year and the truth crashes home.”

The centrality of seed quality to crop production leaves no room for complacency, Wellmann believes. “It’s our responsibility as farmers to find out what we’re buying, and take nothing for granted. If somebody tells you a seed is a strong, early emerger, that’s great, but you still need to find out. If it turns out different from advertised, why should you have to keep it? Find out the seed details and it’ll help you plant and manage. Just after my first year, testing is telling me blind faith isn’t good enough. I want to know exactly what I’m putting in my fields.”

Who Killed the Finest Soybean Soil in the World?

At a Crossroads: Where Does the Pork Industry Go Next?
2