Grover Webb’s Illinois shrimp production is centered on laser-focus attention to expenses and insistence on top-quality shrimp: “Low tech, no expensive equipment and minimal processing—at least that’s how I do it.” ( Chris Bennett )

Seven hundred miles from home, Grover Webb slid seven coolers of precious cargo into a Dodge Caravan and hit Texas pavement on I-30, settling in for an 11-hour drive northeast to the familiar comforts of his farmland. Inside the coolers, as plastic bags of brown water teemed with life, the murky liquid represented a new step beyond Webb’s Illinois corn and soybean rows: The Pope County grower was about to pull the trigger on a new crop—70,000 shrimp.

In 2000, Webb counted the capital startup and input costs of shrimp production in southern Illinois, built market opportunity with an annual festival promotion, and crafted a highly successful seafood addition to his farming operation. Almost 20 years later, Webb’s production has gone from strength to strength, solidly built on his livestock background, a laser-focus on pinching every cent from each expense dollar, and insistence on top-quality shrimp.

“Diversity is the name of the game from my perspective. Diversity is protection, but you still have to get the spending part right, and if it’s row crops or any other part of my farm, I’ve always been highly conservative when it comes to spending money,” Webb explains. 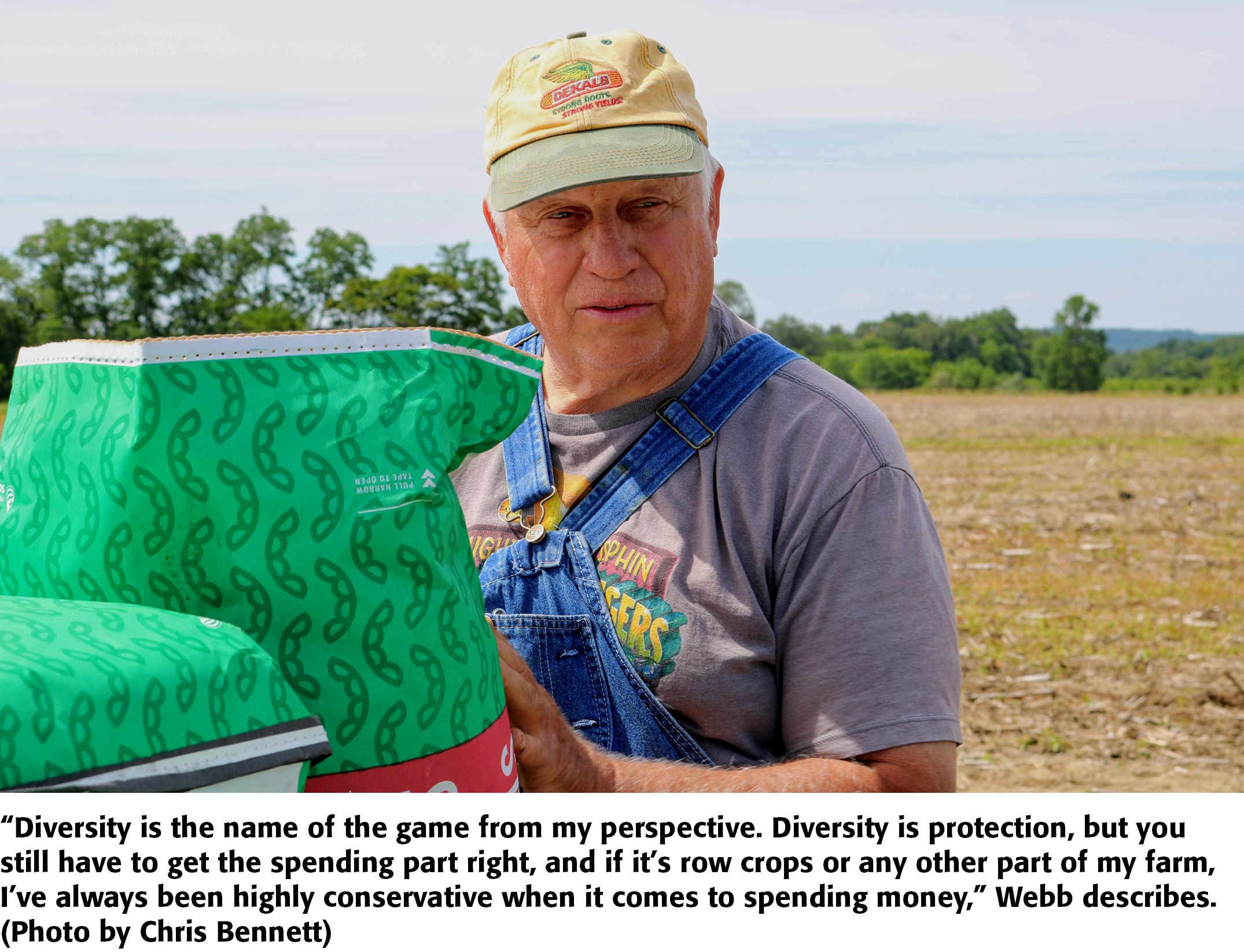 Across 950 acres of rolling hills squeezed between the Mississippi and Ohio rivers, Webb, alongside his brother, Richard, runs Tanglefoot Ranch. In addition to 70 head of beef cattle, two hoop houses of specialty produce (raspberries, strawberries and tomatoes), and 300 peach trees, Webb grows 500 acres of corn and soybeans.

In the late 1990s, Webb considered aquaculture as a means to gin additional farm income, and was initially steered by convention toward catfish. But he pulled back from the wide road, gun-shy of catfish due to a limited aquifer, considerable land requirements and processing demands. Instead, in March of 2000, he pushed the dirt off an open hillside and built a levee, digging six three-quarter acre shrimp ponds that slanted from 3.5’ to 4’ deep. Webb ran irrigation pipe (borrowed from a farming neighbor) an eighth of a mile and filled (supplemented by rainwater) the freshly dug shrimp ponds from old farm ponds. 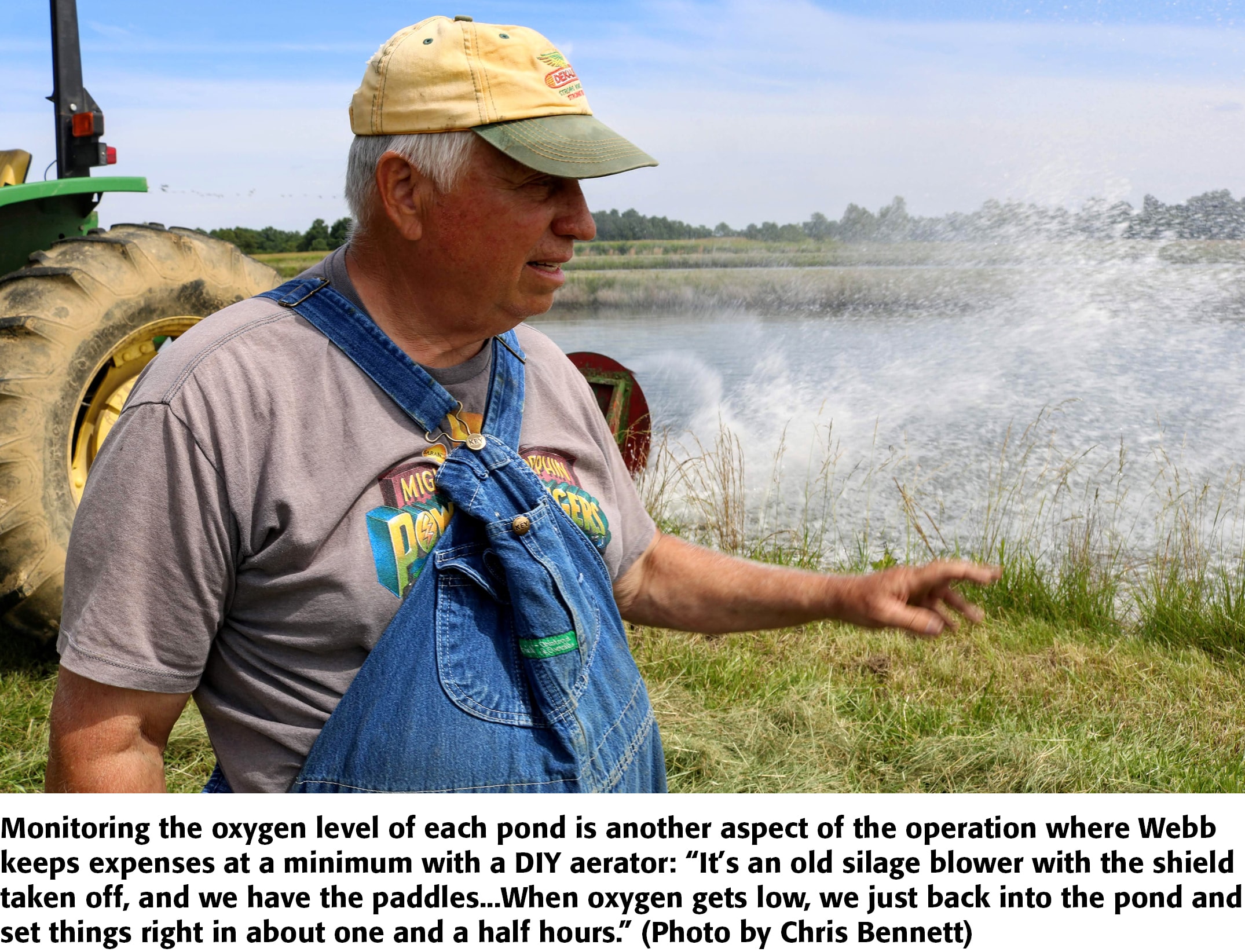 Shrimp were sourced from Aquaculture of Texas in Weatherford, a half hour west of Fort Worth, and hauled back to a DIY nursery built in Richard’s basement. Webb placed swimming pool liners inside two repurposed 5,000 gallon tanks (17’ diameter) that originally saw action as blue tombstones—Harvestore silo rings. “We were serious about not spending money. We got what we needed off the farm or bought it at Walmart.”

In June, Webb placed the shrimp into the six outdoor ponds and harvested in the fall (120 days of total growth). “Our first crop and first year was a success.”

Thomas Wright, 66, a longtime neighbor and jack-of-all farm trades, initially was skeptical when Webb waded into shrimp farming. “I heard he was going to try shrimp and thought it was bull, but Grover was serious. When he harvested that first year, I stopped by to help with harvest, and Grover wanted to pay me. I said, “No way. You just paid me with the experience of harvesting the first shrimp ever in southern Illinois.”

“I’ve never known a farmer like him. He looks out for the community and has a great reputation with others. I worked for him several years and couldn’t ask for a better farm employer.”

Ice in the Sahara

In a county housing a total population of 4,300 and heavily shadowed by the Shawnee National Forest (40% of county area), Webb kept a close eye on promotion out of the gate, and kick-started a market through the county seat: Welcome to the Golconda Shrimp Festival. (Presently in its 20th consecutive year, the annual shrimp event was judged by National Geographic’s Traveler Magazine in 2016 as the #1 food festival in Illinois.) 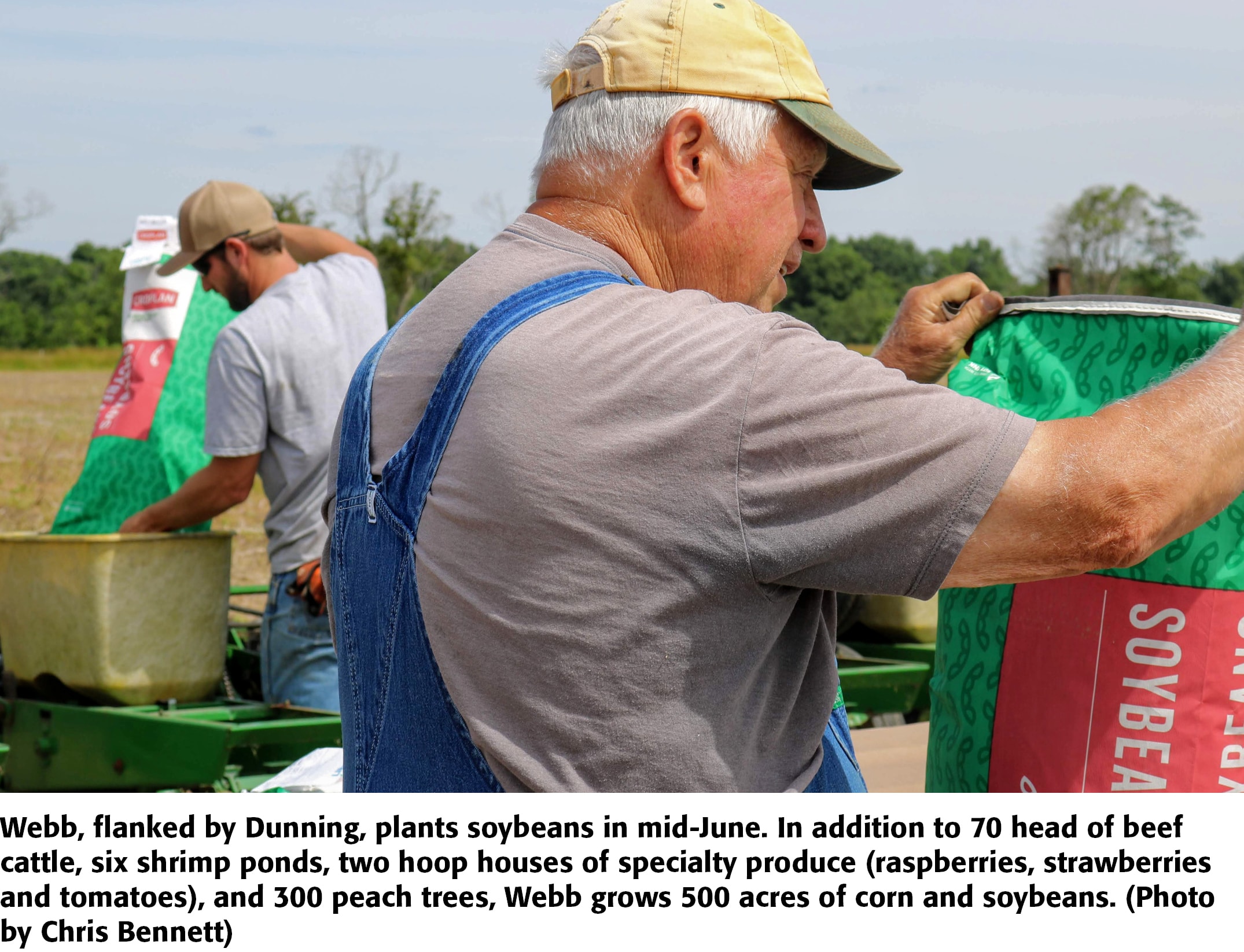 “Shrimp in our area was like ice in the Sahara, but people came. Every year, we get 6,000-plus people for the one-day event in September. Now our market includes the public, individuals who come to the farm, wine festivals and more. There’s nothing worse than raising any kind of crop that you can’t sell, but it turns out shrimp was a great alternative crop. We also operate as a regional nursery and supply other shrimp farmers.”

Each April, Webb starts with 70,000, 33-day old shrimp in the nursery. Fed with an oversized saltshaker, the shrimp consume a total of 25 lb. of feed across a 45-day stay in the temperature-controlled (80 F) tanks until the outdoor pond water hits 72 F, typically in late May or June. The climate of southern Illinois is surprisingly ideal for freshwater shrimp, according to Webb: “You want your water to stay around 80-85 degrees, and I think this is the sweet spot climate for shrimp. Go north and it’s too cold, and go south and it’s too hot for maximum growth.”

After placement in the ponds, Webb feeds the shrimp once a day (supplemented by the natural food supply in the water), broadcasting feed with a leaf blower positioned under a cylinder-shaped, leftover nursery pig feeder from his hog farming years, mounted on a 4-wheeler. Foregoing the expense of traditional shrimp feed, Webb uses a 36% protein pellet and sprays 50 lb. of feed each day, spread across the six ponds. “I tried soybean meal, but it floats on the surface, but the cattle pellets sink and allow the shrimp to eat. You have to be sure to distribute the feed evenly, because you want all the shrimp to get access and don’t want them crawling over each other.” 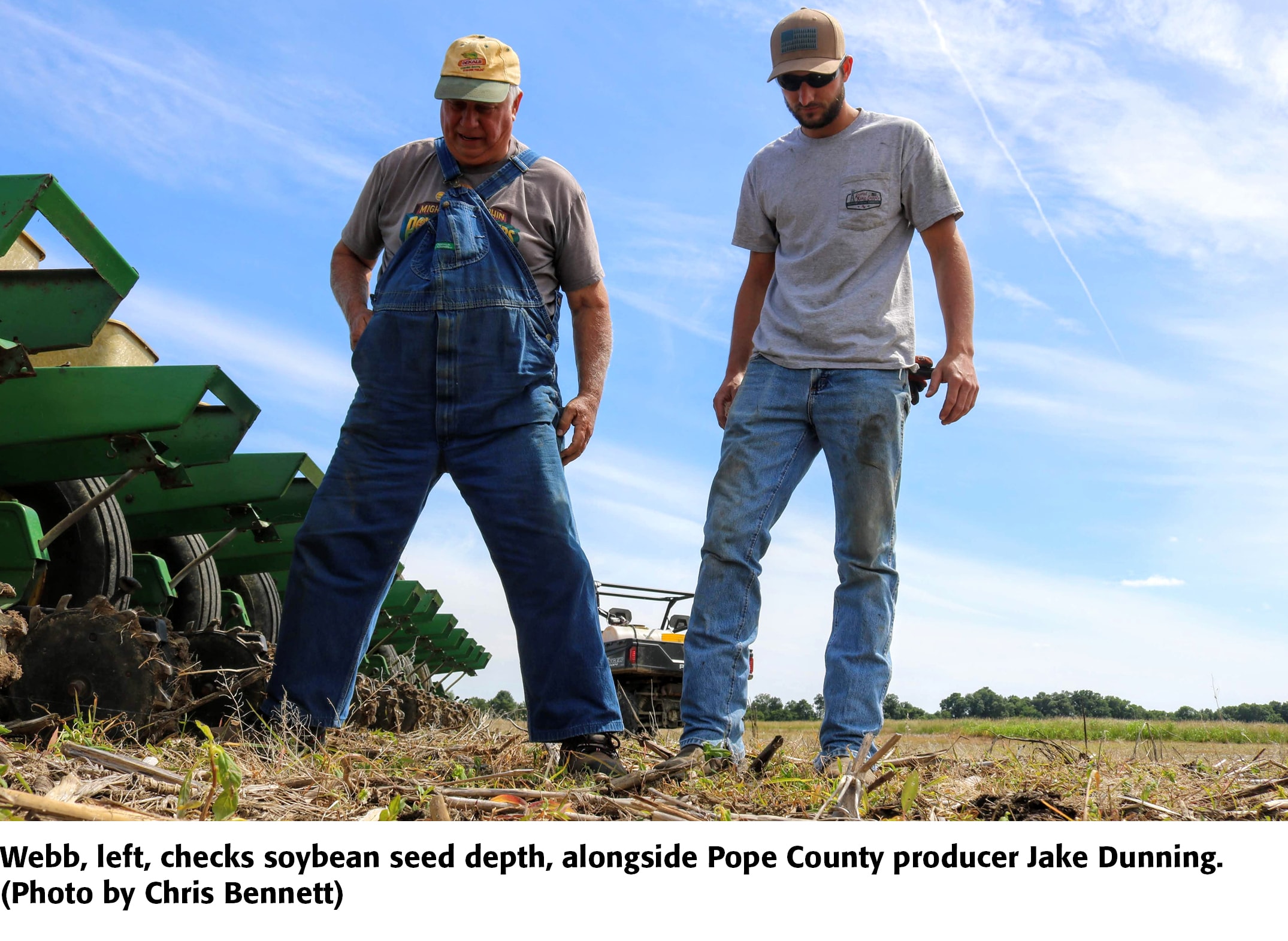 Monitoring the oxygen level of each pond is a significant demand, and another aspect of the operation where Webb keeps expenses at a minimum. “We have an aerator that is sort of self-made. It’s an old silage blower with the shield taken off, and we have the paddles. It’s PTO-driven off a tractor. When oxygen gets low, we just back into the pond and set things right in about one and a half hours. You can lose a crop if you don’t watch the oxygen.”

Shrimp predators are not an issue, Webb explains, due to the pond design. The ponds have no shallows due to steep sides, providing birds and predators with minimal opportunity to inflict dollar loss.

Webb squeezes hard on input dollars, and the savings, combined in his case with the absence of equipment expense and a background in livestock production, have been a vital cog in the success of shrimp farming at Tanglefoot Ranch. “One of the big keys was no heavy capital investment. We were wise to make do with what we had. Looking back, there were other people that tried shrimping, but they’re out now and that’s partly because they lacked livestock experience. Some people thought you could throw shrimp in the water, come back in the fall, and there’d be dollar bills floating in the water. I’ve always made sure to provide my cattle with exactly what they need, and I treat shrimp the same way.”

At fall harvest, temperature management is critical because shrimp will die at roughly 55 F, Webb notes. When the mercury drops to 60 F, usually 120 days after placement in the ponds, shrimp harvest begins, with 10-12 live animals per pound—basically thumb-sized specimens. (The shrimp aren’t fed a day prior to harvest in order to ensure an empty mud vein.) 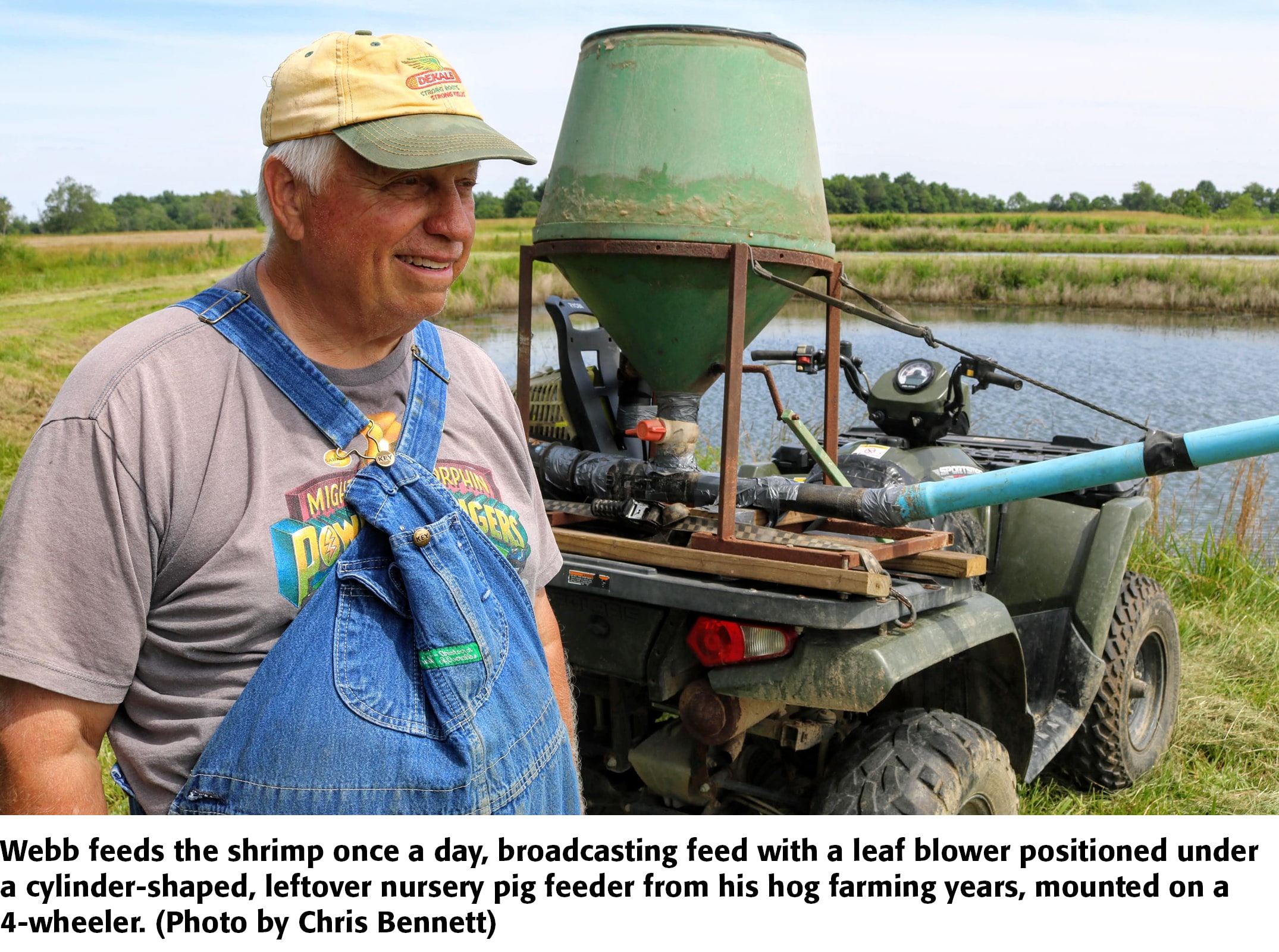 Harvest requires a bit of herding: The shrimp have to swim out of the ponds. Each pond has a 10” pipe running through the bottom of the levee, and when the pipe’s end-cap is removed, water flows out and creates a whirlpool within the pond. The shrimp initially rise from the bottom and back away from the whirlpool, but when the pond is almost empty, they swim with the flow and into the pipe.

Webb’s shrimp crew stands at the pipe’s opening with dip nets at the ready, backed by a box and screen in case any shrimp skirt the nets. The shrimp are immediately dropped in a water tank filled with ice to chill, and then taken to a work shed. Pop off the heads, rinse, bag and freeze. “You can’t get anything tasting fresher. The quality is outstanding,” he says. “Low tech, no expensive equipment and minimal processing—at least that’s how I do it. It’s a long ways from the labor of processing catfish.” 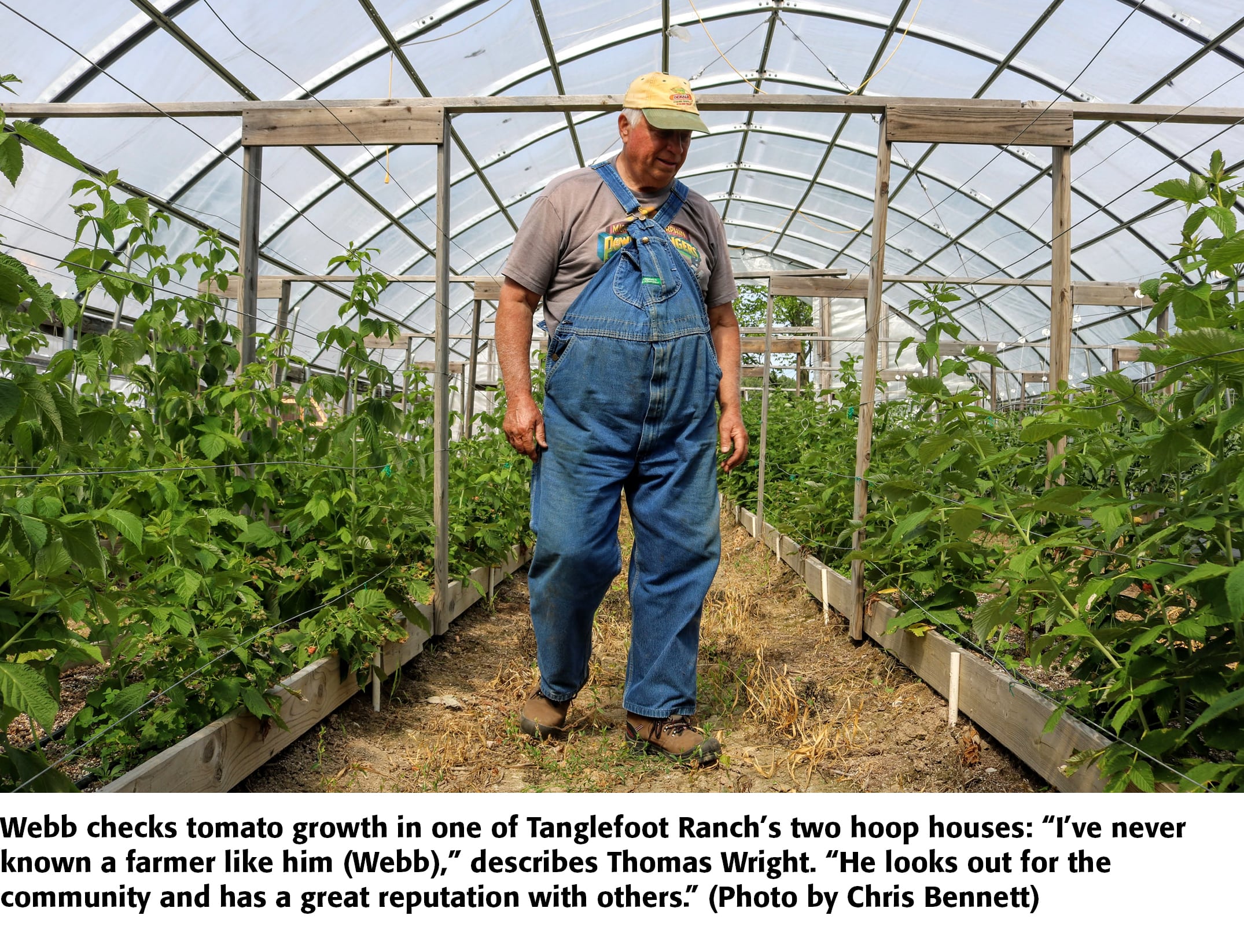 Butch Hart, 49, works for the Farm Service Agency (FSA), and maintains 50 commercial cows in Pope County. He says Webb’s ability to utilize resources is exceptional: “Grover is always looking at diversity and utilizing what he already owns. If he has a combine that no longer functions, he’ll build a boom, hang it off the front, put a tank on the back and use the old combine chassis to spray his crops. Across his farm, he knows how to make every dollar count.”

When Webb began raising shrimp in 2000, the introduction raised eyebrows in Pope County, Hart recalls: “We’d seen people try emu and elk, and watch them collapse. But with shrimp, Grover measured out his facilities, land and expense, and knew what he was doing. He made it work.”

What’s next for Tanglefoot Ranch? Webb promotes farm tours and dinner events, and has taken advantage of an old hog facility, turning four farrowing rooms, a nursery and gestation barn, into a dining room, mushroom-raising facility, walk-in cooler and storage area. “I keep going back to diversification. We’ve had weddings, birthdays, karaoke once a month on Saturday nights, and would like to target motorcycle clubs and recreational riders. Our facility is great to serve food and you can see across the orchard, bluff and down to a swamp. We’re always considering something new in the works.” 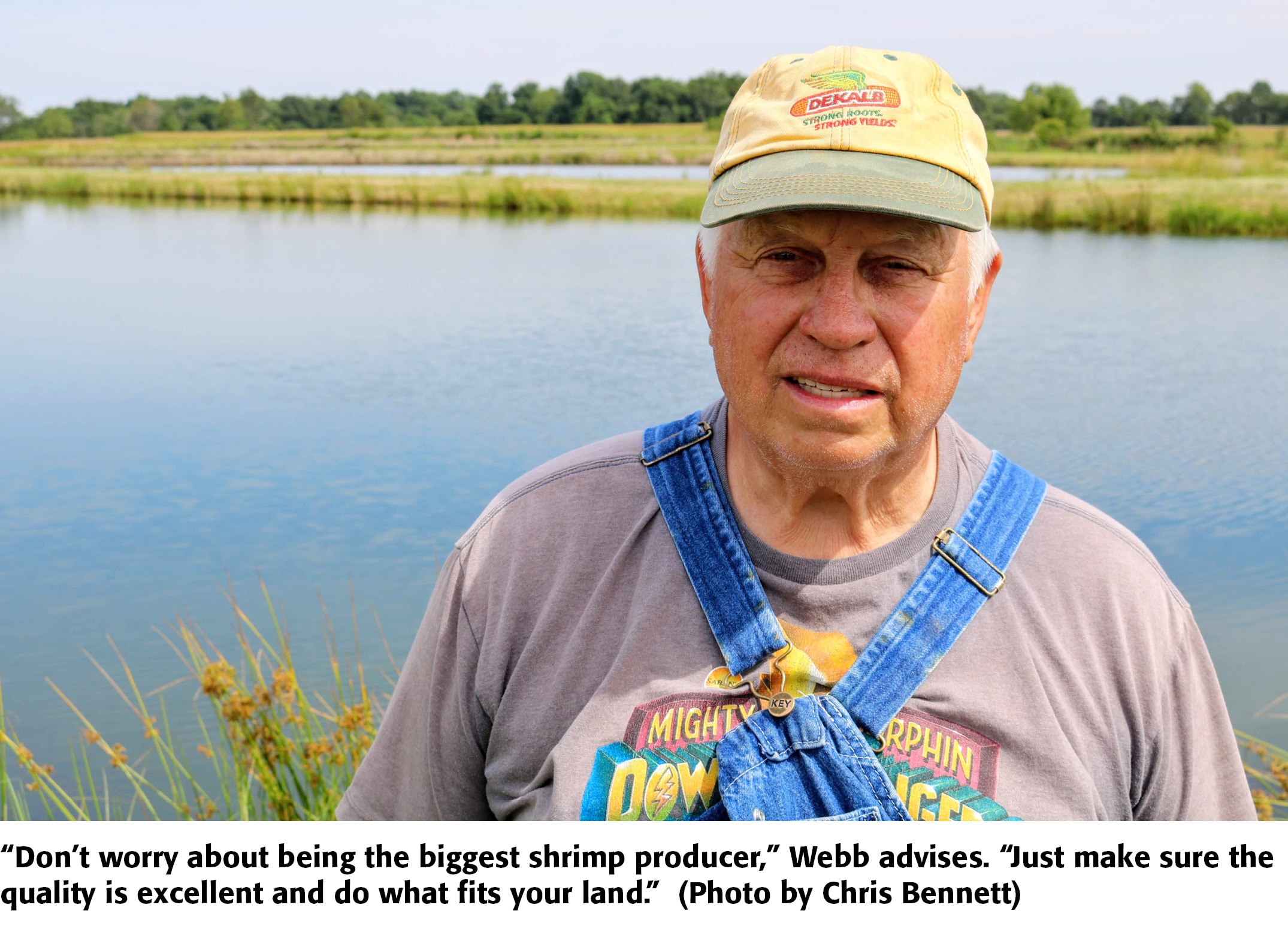 What advice does Webb offer potential shrimp producers? “This can be a great part-time enterprise for any member of a farming family. If you have a small area that holds water, a few small ponds might be a fit. Don’t worry about being the biggest shrimp producer: Just make sure the quality is excellent and do what fits your land.”

I-80 Harvest Tour: Reaping Rewards Under a Nebraska Full Moon
3

Signal to Noise: The State of the Race
4

Why Pivot Bio PROVEN™ is a Big Game Changer