Taranis has a fleet of more than 100 drones and airplanes, and its sensors can capture clean usable images at 35 mph with a drone or 100 mph with a plane. ( Taranis )

Taranis, a company that provides sub-centimeter resolution of fields and uses computer vision, data science and deep learning algorithms to identify yield threats, announces a weed identification feature has been added to its platform.

“We can monitor a field and see the actual weeds—not just measure that the field has weeds, but we can identify which weeds and measure growth stage of those weeds,” says Ofir Schlam, CEO and Co-founder of Taranis.

Schlam says the company has worked with 120 expert agronomists to develop the weed identification feature over the past year. The effort has focused on common varieties in the broadleaf and grass families, which includes more than 30 species. (see full list below)

The Taranis technology is looking to replace boots in the field, but it relies on an agronomist to make the final confirmation of its algorithm’s recommended prescription for the necessary spray application.
“We want to allow the agronomist to focus their time on their expertise in helping farmers fight weeds,” Schlam says.

Schlam says the Taranis technology goes beyond previous efforts to remote sense weed pressures.
“Previous generations of this type of product assumed anything outside of the row was a weed,” he says. “But we developed our technology to be more precise. And Taranis can even look for weeds partially covered by a crop or in the shade of the crop. We are measuring the growth stages of weeds for accurate product application and herbicide rates.”

The Taranis platform is supported by weekly satellite images, and ultra-high res images gathered by planes or a drones. Schlam says the company has a fleet of more than 100 drones and airplanes, and its sensors can capture clean usable images at 35 mph with a drone or 100 mph with a plane.

The company is focusing about 60% of its efforts in the US market, with other countries including Canada, Brazil, Argentina, Russia, Ukraine and Australia. 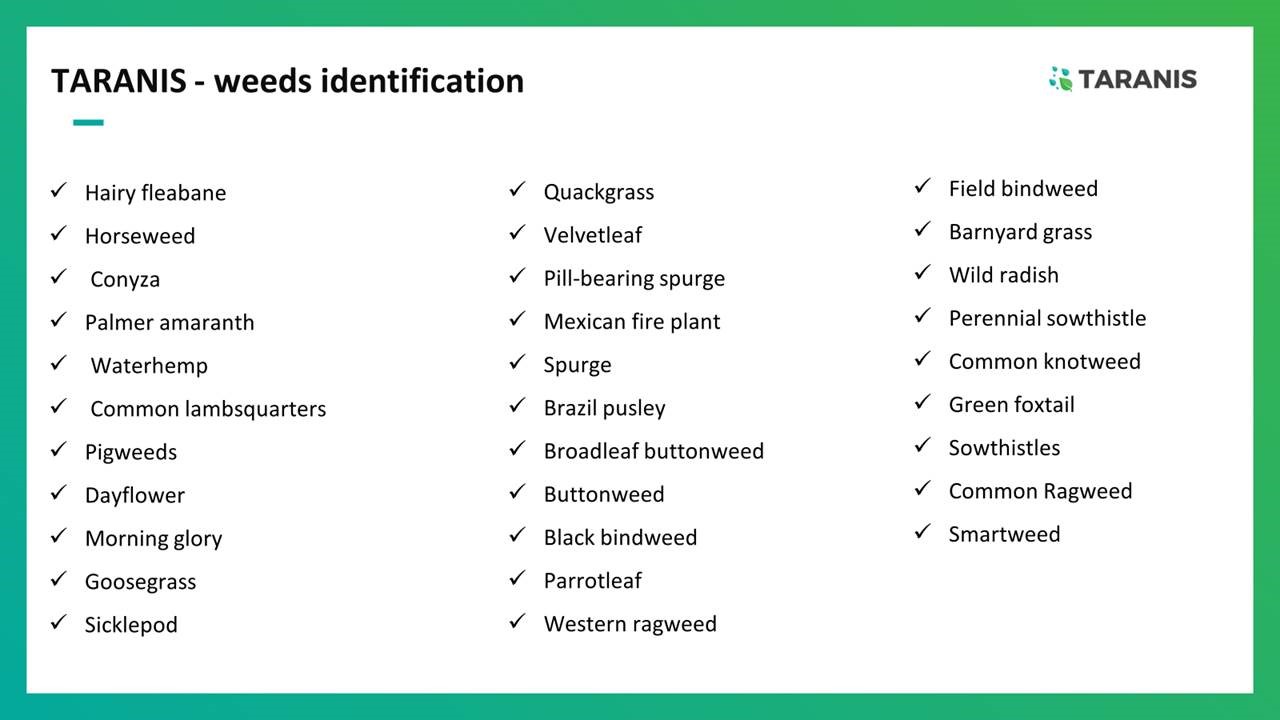 PREV
Planting Delayed? Here Are Your Prevent Plant Options
NEXT
Wit and wisdom of Bill Walton

3 Reasons Everyone Should Pay More Attention to Adjuvants