Tyne Morgan
November 11, 2019 10:43 AM
USFR 11/09/19 - FJR
A propane shortage is plaguing the Midwest, but now some are worried it could also mean a shortage of anhydrous ammonia this spring. ( Farm Journal )

As harvest crawls along at the slowest pace in a decade, some farmers are now faced with a new twist in 2019: no propane.

“Yesterday we got the call that we wouldn't be able to receive another shipment of propane and they didn't know when we would get another one,” said Nick Ehlers, a farmer in Tipton, Iowa.

“We have about a day and a half supply left in our tanks, and then we don't know when we'll get another shipment,” said Ehlers, as he was harvesting last week. “We know there are trucks at the terminals but we don't know how that's going to be allocated.”

Farmers in not just Iowa are faced with the dilemma, but the propane shortage is plaguing producers in states like Iowa, Minnesota, Wisconsin and Nebraska, as well. Some of those farmers may now be forced to wait until spring to find propane to dry their grain.

“We’ll plan to go to plan B and maybe harvest wetter corn and freeze it and dry it later, we're not sure,” said Ehlers.

The propane problem is now turning into a harvest debacle, with some producers worried about the quality risk of storing wet corn for that long. Pro Farmer’s Inputs Monitor’s Davis Michaelsen says while propane suppliers were aware of the added demand coming into fall, it’s a logistics issue this year.

“In a regular year when maybe crops aren’t so wet coming out of the field, the system can keep up fairly well,” he said. “This year, of course 2019, you just can’t have harvest without problems, right, and propane is more than happy to answer that. So, infrastructure is falling behind and this is where we really see it: crunch time.”

The pain to find propane is growing. A video posted on twitter shows a long line of trucks waiting to fill up in Garden City, Minnesota. 18 trucks were waiting outside a tank site to get propane. Those lines are backing up outside of main hubs in Missouri and Kansas, as well.

“I talked to Iowa Secretary of Agriculture Mike Naig yesterday and he told me that would include waiting in line at propane terminals,” said Michaelson. “He said some trucks are traveling as far as Kansas and could be looking at trips as far as Texas to get supply and bring back. And that’s where those hours of service waivers will really help out.”

The pinch to find propane has happened before.

“We saw it in the winter of 2014 when the pipeline was taken offline through the northern plains and price prices spiked to $4 and in some cases $5 per gallon,” said Michaelsen.

This year is different. The shortage isn’t happening nationwide. University of Missouri’s Seth Meyer said plenty of liquid propane supply is out there, just not in the areas that need it most.

“There is propane to be had,” he said. “There's an unusually large amount of propane stocks down in the Gulf. You have to figure out how to get that propane from the Gulf back up to the Midwest. The system isn't necessarily designed to do that.”

Other sources in the industry who watch the supply closely confirm a nationwide shortage isn’t the issue. It’s a wet harvest bumping up demand, combined with a cold air, that means demand is being pulled from all sides right now.

“Across the U.S. we're sitting near 100 million barrels of propane in storage,” said Jennifer Van Dinter, NGL and Petrochemical Analytics, S&P Global Platts. “The majority of that is down a lot along the U.S. Gulf Coast. If we look at the Midwest in particular, we are a little bit below the seasonal average, but we still have fairly healthy stock levels.”

Now some propane retailers are forced to drive hundreds of miles to try to get their hands on whatever supply they can.

“As the situation lingers, delivery costs and transportation fees are probably going to show up in costs to the end users, which are the farmers,” said Michelsen.

“This becomes a very significant cost on a per bushel basis for producers, when they either have to pay that extra cost for the propane or they can't even get access to it,” said Meyer. “You're talking about issues of quality that could be substantial; a lot of things can go wrong when you try and skirt around not being able to dry your crop.”

Propane is already in short supply as the country braces for another major cold snap; cold air that could bump up residetnal propane needs earlier than normal, putting another strain on supply.

“I just heard from Northeast Iowa, and we're told that some of the propane marketers in Northeast Iowa have literally stopped hauling LP to dry corn,” said Dawn Carlson, CAE is the President and Chief Executive Officer of FUELIowa. “They know that they only have a certain allocation that they're going to receive at this year, so they have to save that for home heating and for the livestock confinement facilities.” 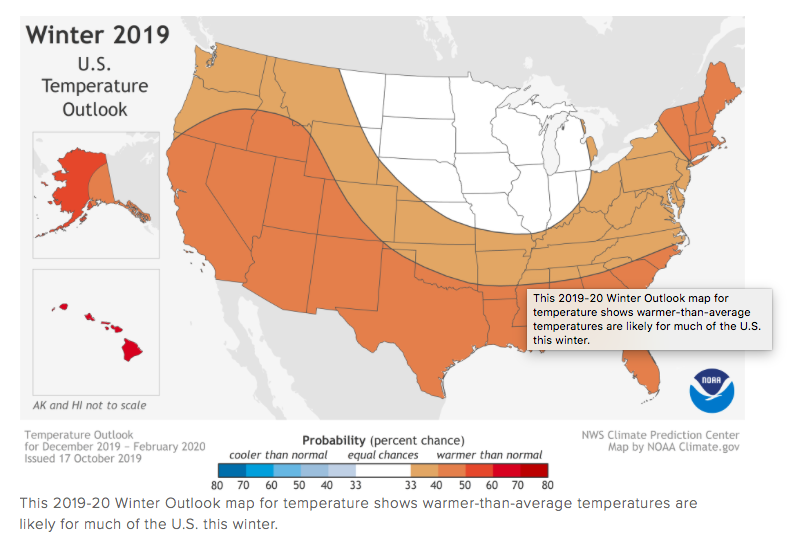 While NOAA’s winter forecast points to a mild winter, USDA meteorologist Brad Rippey says a warm winter may not be in the cards this year, meaning the need for propane could get worse.

“We are actually expecting some fairly significant incursions of cold air, particularly across the plains and the Midwest,” said Rippey.

He said shots of extremely cold air, combined with more moisture, is a combination already crating concern heading into spring.

“We're going to have a lot of moisture that's going to be frozen in or locked into the soils, and then we're going to expect to put a lot of snow on top of that as we get to the spring of 2020,” said Rippey. “I'll go on a little on a bit of a limb here and say that we do expect to see some big trouble with spring field work in states like the Dakotas and on into the upper Midwest, due to the excess soil moisture this fall and the expected heavy snow coming for this winter.”

For farmers like Ehlers, thoughts of spring are already sprouting fears.

“All the trucks that are hauling propane, a lot of them are normally hauling anhydrous right now, so that will probably be in short supply soon,” he said.

Full of wet corn. Running out of Lp. Might as well put some nh3 down before that’s an issue. @agritalk pic.twitter.com/cJ1gQCTSfJ

For now, there’s no timeline on how long the propane shortage could plague the Midwest.

“There's plenty of propane, it's just going to be more expensive,” said Meyer. "That doesn't really help when you can't get it today and you're making a choice whether to dry your grain down or not.”

That’s as the scramble to move product North becomes even more dire, it’s adding another headache to a harvest that’s been anything but easy in 2019.

Thousands of Corn Acres Left To Harvest In North Dakota

What Happens to Glyphosate, Dicamba and PCBs Now?
4