The Next Grain Demand Giants

The push to develop markets and diversify beyond China. ( ASAs World Initiative for Soy in Human Health; U.S. Grains Council )

A bag of feed crinkles in Samveasna David’s grip as he walks along his parent’s fishpond in Cambodia. He drops the bag and grabs a bowl of the soy-based feed inside. As the sun sets over the pond, he slings the protein-rich fish pellets into the air. The hungry fish feed on the U.S.-grown ingredients.

Each scoop lands like applause to the developing aquaculture industry in Cambodia. A country, like India, Vietnam, Morocco or Pakistan, that holds real potential to quickly develop into a major market for American agricultural goods.

U.S. agriculture has hung its hat on Chinese demand. The often touted “one in three rows of America’s soybeans go to China” statistic has lost its impact after nearly two years of a trade war and tit-for-tat tariffs with the country.

Even with the phase-one agreement, which details China buying around $80 billion in ag goods in the next two years, the future remains unclear. One certainty? The U.S. must continue to develop new markets around the globe.

“We’ve overhauled, redone and renegotiated over half of U.S. ag export trade in less than two years,” says Gregg Doud, the chief agricultural negotiator for the Office of the U.S. Trade Representative.

New agreements with Canada, Mexico, South Korea, Japan and China hold promise of increasing demand from some of agriculture’s biggest customers. But more can and should be done.

“My perspective on a free trade agreement is how long does it take before you know what you’ve got? The answer is about 10 years,” Doud says. “All of the easy stuff in ag was done a long time ago.”

Given that timeline, building and developing new markets for U.S. agricultural products, especially grains, requires long-term investment. It’s a process American groups are pursuing in countries all over the world.

“We want to move our 2 billion bushels of corn carryout and the several million tons of grain sorghum now,” says Ryan LeGrand, president and CEO of the U.S. Grains Council. “But we cannot lose sight of what’s 20 years down the road.” 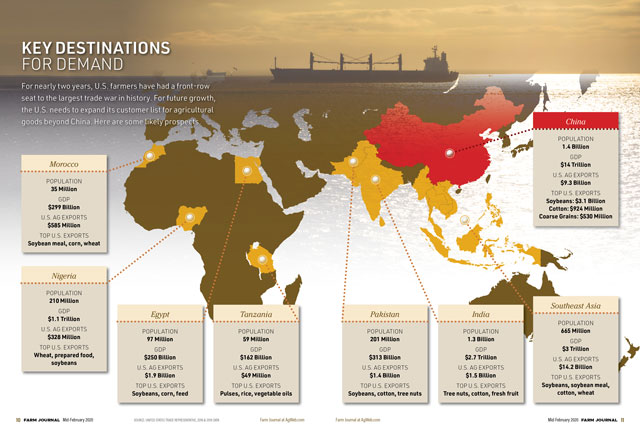 So which regions could create China-sized demand for U.S. ag products? Based on population, no opportunity looms larger than the 1.4 billion people living in India.

“We’ve had a lot of barriers, and I am expecting we can make some progress with India in agricultural products and trading relationships that could be the next China for the next 20 years,” says U.S. Agriculture Secretary Sonny Perdue.

The U.S. Soybean Export Council began investing in India 22 years ago, says the organization’s CEO, Jim Sutter. Their goal is to help a country first consume more of its own grain, which then creates a customer for U.S. grain.

“They don’t have any soy to export today, unlike even five years ago they were still doing some soy exports,” Sutter says.

Around one-third of India’s population is vegetarian. But a growing middle class could create future demand for U.S. meat.

“There are a lot of people in India who are protein-deficient,” Sutter says. “That will change over the next five to 10 years, and we think, in time, they'll need to import soy.”

“We can’t get into those areas because of GMO restrictions and that’s specifically on corn and distillers’ grains,” LeGrand says.

While India holds promise for its sheer size, their neighbor to the northwest, Pakistan, is also an opportunity budding with potential.

“They hardly imported any soybeans from the U.S. five years ago, and now they are on our top 10 list of importers,” Sutter says.

“Their poultry industry is growing rapidly so they need the meal, and now entrepreneurs are building crushing capacity,” Sutter says. “They would like to become a hub for that part of the world.”

Like most countries without free trade agreements with the U.S., non-tariff barriers limit growth.

“Some tariffs have to come down in that region,” LeGrand explains. “In Vietnam the corn tariff is 5%, which doesn’t sound like much, but in the cutthroat world of corn, 5% can put you out of the market.”

The key will be the region’s diets shifting from rice to other grains and animal protein.

“Southeast Asia is home to nearly 700 million people,” Doggett explains. “You just need to get them to eat a few more bites of animal protein each week and you’ve made a huge dent in the corn pile.”

India and Southeast Asia might be the biggest bright spots in the short run, but Africa could be the driver for long-term demand growth.

Nigeria, with its 210 million people, has the seventh-largest global population. The country is rich in natural resources and features a growing economy.

”Nigeria may not be another China, but could be a significant market in the future,” Sutter says.

On the eastern coast of Africa, Tanzania is also ripe for change. Around 45% of its nearly 60 million people are under the age of 15.

The U.S. Grains Council has a poultry production center in Tanzania that’s both a workshop and testing ground for local farmers. LeGrand says this work is similar to what the organization started doing in Mexico in 1979.

“Their livestock industry has benefited tremendously from access to affordable feed grains from the U.S., and today Mexico is our No. 1 corn importer,” he says.

Behind that jump in U.S. crop consumption is growth in Egypt’s poultry and aquaculture industries.

To replace China’s appetite and market share for U.S. ag products will take time. The “new” China will likely not be a single substitute.

“It’ll be a collection of these kind of markets that will be the next China — not just one country,” Sutter points out.

In the U.S., cattle and hogs drive grain demand. In other parts of the world, fish and poultry are behind market growth for U.S. crops. Initiatives such as the American Soybean Association’s World Initiative for Soy and Human Health (WISHH) focus on getting protein to people in developing countries, while building demand for soybeans.

For example, the group finds innovators like Keo Yada and Thy Ratha, who own a fish hatchery near Siem Reap in Cambodia. Missouri farmers’ soybean checkoff dollars helped fund an installation of a new fish raceway so area farmers can learn to efficiently produce fish.

“In 2018, 50,000 metric tons of U.S. soybean meal was going into Cambodia, and that could reach 100,000 metric tons by 2030,” says Liz Hare, WISHH executive director. “These numbers might not seem impressive. The numbers you should pay attention to are the economic growth and population growth in such regions.”

As U.S. teams wander the wet markets of Cambodia or visit tofu makers, they are focused on an important fact: Asia will be home to 65% of the world’s middle class by 2030. 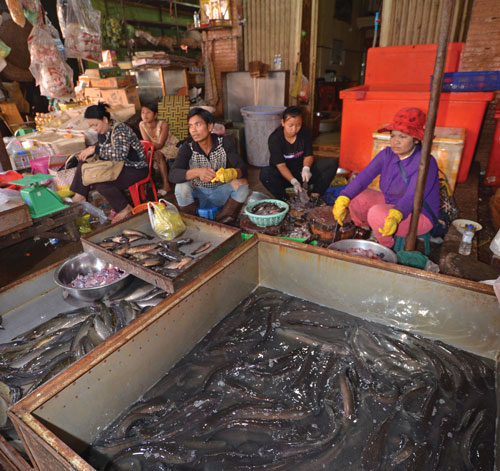 PREV
Sorghum Expected to Hit its Stride with Sales and Acre Increases
NEXT
How to Achieve Record Corn Yields: Start the Crop Right

Put the Crop Mix Puzzle Together Before 2021
3

Storage Strategies To Spread Out Risk
4

What the New Dicamba Label Looks Like in the Real World