For the fifth consecutive year, land values have declined in Nebraska. ( AgWeb )

For the fifth consecutive year, land values have declined in Nebraska. During that time, values have dropped a total of 20%, according to the Nebraska Farm Real Estate Market Highlights report that surveys appraisers, farm and ranch managers and agricultural bankers.

Nebraska farm real estate set the highest nominal market value for the all-land average in 2014 at $3,315 per acre.

The decline in land values have been gradual, notes Jim Jansen, University of Nebraska Extension economist and educator.

"As we see gradual change, it's important to understand what's happening across the state," he notes.

Rates of decline were lower in the eastern third and central region of Nebraska compared to the western two-thirds of the state. In the northwest, southwest and south districts, survey participants noted restrictions in irrigation appropriations and new developments.

All of the seven land classes dropped in value, compared to last year:

The net rates of return to agricultural land give an estimate on the net income earning potential relative to the value of the asset. In 2019, the net rates or return reported slight declines across Nebraska. Lower net returns on agricultural land coupled with high landownership expenses for the investment led to stagnant capitalization rates. 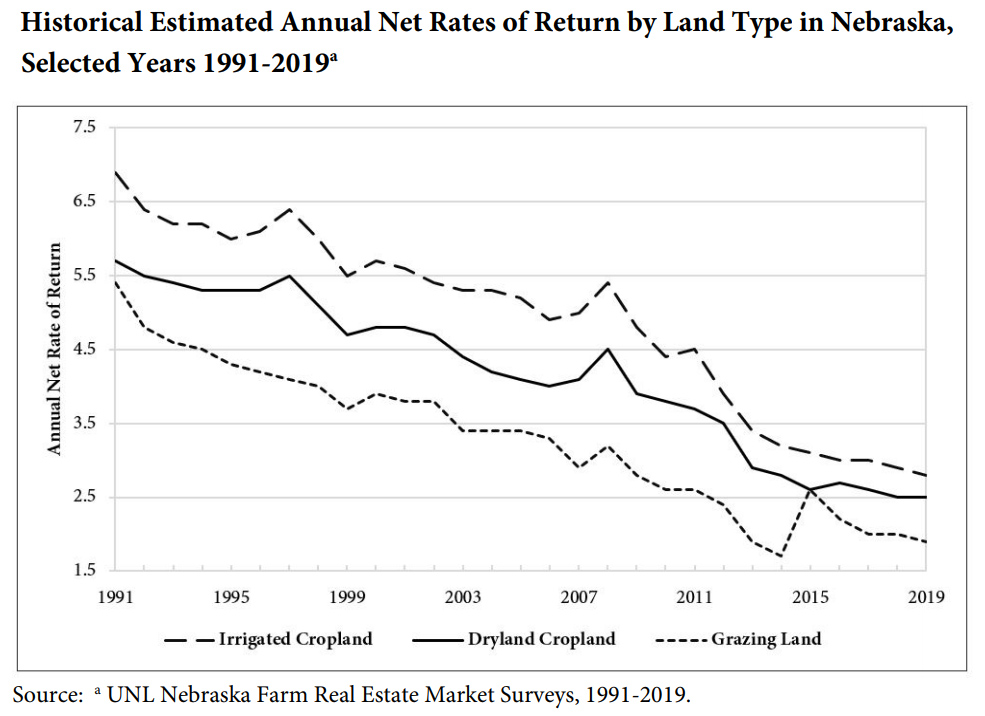 Survey participants reported current crop prices, property taxes, and farm input costs as the most negative forces leading to the lower market value of land across the state. This is the second year in a row those three factors topped the list of negative land forces. Additional economic forces placing strong negative pressure on the real estate markets included future property tax policies and the financial health of current owners.

The only two slightly positive factors influencing the market value of land included 1031 tax exchanges and purchases for farm expansion.

The land outlook in Nebraska remains bleak, according to the report. Survey participants noted 1031 tax exchanges and purchases for farm expansions as negligibly positive. Interest by non-farmer investors in land purchases along with the amount of land offerings for sale provided were also slightly negative.

On average, rental rates for cropland and grazing land in 2019 showed gradual declines for most land classes. Average cropland rental rates for irrigated and dryland production reported declines ranging from about 2% to 8% across the state, while a few districts saw increases of 2% to 5%.

Pasture and cow-calf pair rental rates were mixed to steady depending upon the district. Most regions saw declines of 1% to 7%, while one area saw an increase of 1%.

This annual survey, conducted by the University of Nebraska-Lincoln, polls 125 appraisers, farm and ranch managers and agricultural bankers. The 2018-19 report is the 41st edition of the publication. Preliminary results from the survey were released in April.

Will Land Values Drop Off Their Plateau?

AgPro Podcast: How to Learn From 2019

AgPro Podcast: Technology Is A Game-Changer In Farm Management