From Nebraska to Illinois even down to North Carolina, farmers are dealing with the aftermath of relentless rains.

“We got a drink, all right,” says Randy Uhrmacher, a farmer in Hastings, Neb. “We got 4” to 7” of rain, depending upon which field we were at.”

“The stuff that has been in the ground that I’m replanting right now had probably eight, nine to 10” of rain on it,” says Dennis Wentworth, a farmer in Downs, Ill.

“We had close to 6” within three to four days,” says Meredith Bernard, a farmer in Milton, N.C., who's also known as "This Farm Wife" on YouTube and social media.

Even before the tropical storm hit Bernard’s farm last week, she says they were dealing with flooding. Eleven inches of rain fell upriver from Bernard, and with flooding and water still sitting in fields, she says some of the crop is now a total loss.

“We had 120 acres that were completely submerged,” she says. “It's not just the water, it's the mud in the sand that comes up with it that causes problems.”

From the East Coast to the West Coast, it’s a tale of two crops. Farmers in Oregon are dealing with the opposite issue.

“It's been very dry,” says Mike Macy, a farmer in Culver, Ore. “Since January 1 we've had very little measurable precipitation.”

Macy says late May in his area saw the biggest rain event of the year, when 1” of rain fell. While he was thankful for the moisture, it wasn’t enough to make up for the moisture deficit he’s facing.

“It was so dry that I actually was planting potatoes again within two days,” says Macy. “The ground just sucked it up.”

It was a similar situation for Nebraska farmers before the rains hit two weeks ago. Uhrmacher says area farmers kept missing chances for moisture.

“We were just to the point where I’d run a circle on our pivots because it was so dry,” says Uhrmacher. “We needed to get herbicides and some fertilizers activated and keep the root zone moist.”

He says turning the pivots on in mid-May was a first for him, but with corn only 3” tall starting to wilt, he knew signs of stress meant the crop needed moisture quickly

While the moisture story differs across the country, USDA meteorologist Brad Rippey thinks a wetter weather pattern could play out during the summer months.

“The early look is that while it will not be as wet as last year, we are going to be dealing with a lot of moisture across the eastern half of the country,” says Rippey.

Rippey says summer weather is driven by a couple of jet streams—one from the north and one from the south.

“It looks like the one northern jet stream or the polar jet stream should be delivering just enough cool air to keep temperatures in check,” he says. “We'll have some hot weather from time to time, but it doesn't look like any sustained periods of hot weather for the Midwest.”

Rippey also sees ample moisture coming from the South. That weather outlook aligns with the National Weather Service’s (NWS) summer forecast, which highlights an outlook for above-normal heat for much of the country, other than the heart of the Midwest. 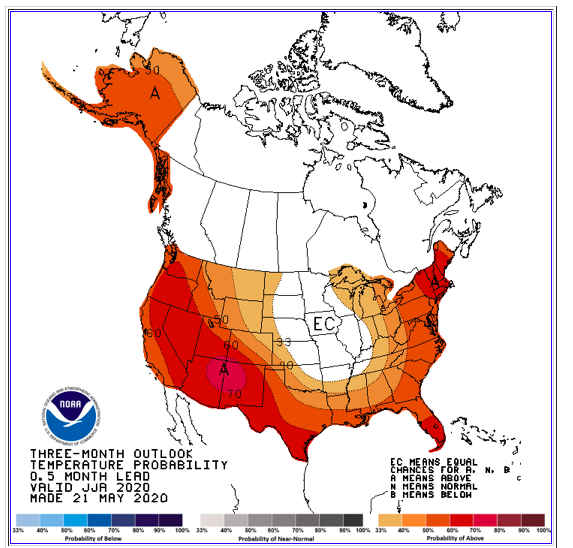 NWS is also forecasting ample moisture across the middle and eastern portions of the country from June through August, a forecast with which Rippey also agrees. 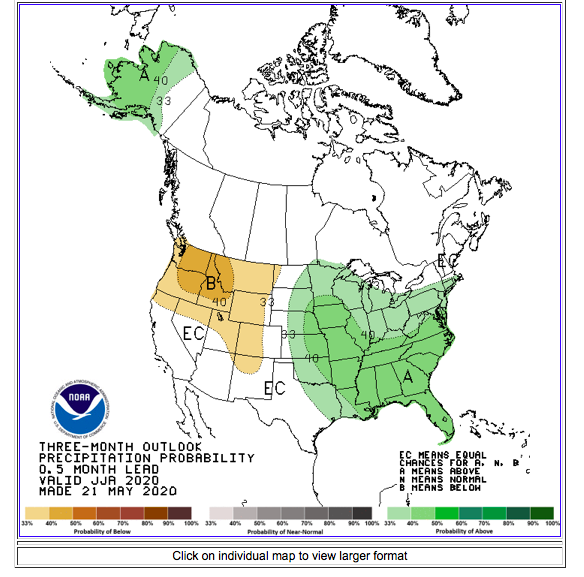 “For almost the entire eastern half of the country, all the way from the eastern Plains to the Atlantic Seaboard, we are expecting above-normal precipitation for the June, July and August time period. That does portend that we should see a lot of downpours, a lot of showers and thunderstorms across the eastern half of the country this summer, and that does include the heart of the Midwest as well.”

Not every meteorologist is on board with a wetter than normal summer. Drew Lerner of World Weather says his forecast shows conditions becoming drier this summer.

“We have a ridge of high pressure that's coming up now over this week,” he says. “It's a little bit of a precursor to what I think we'll see a little bit later in the summer season. “

Lerner also thinks while the U.S. will see heat, the moisture isn’t a guarantee this year. That’s why Lerner says his forecast differs from the NWS summer outlook.

“I'm not convinced, though, that their precipitation forecast is just right,” he says. “Part of the problem is that the month of June could be a wetter bias, and then I think they [NWS] perpetuate that too far out in time. I'm kind of expecting to see basically near to below average precipitation as we go into the month of June, especially in the Northern Plains and some neighboring areas there.” 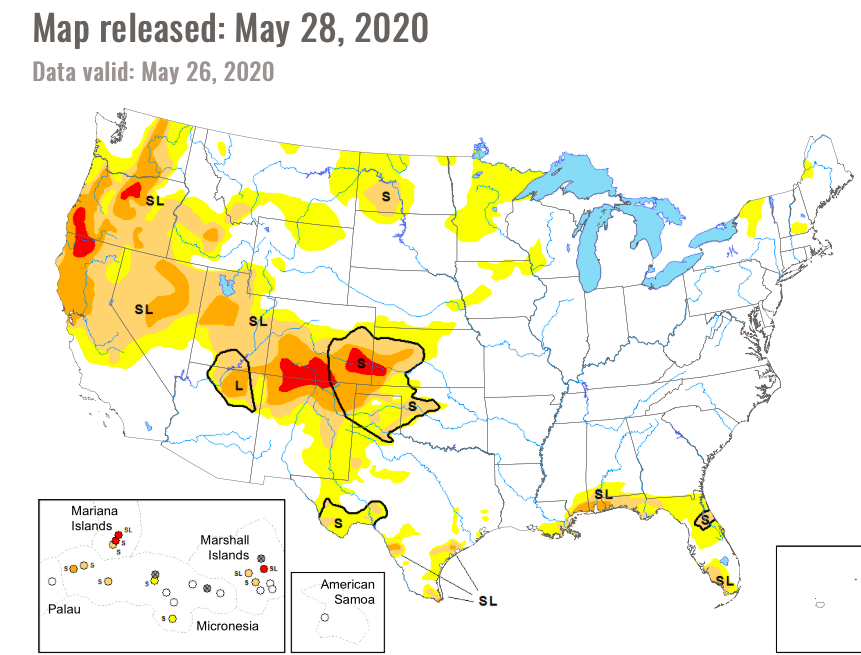 “There is certainly dryness in the Pacific Northwest right now that we need to watch rather closely, especially with small grains up there,” says Lerner. “Some corn crop will probably be stressed.”

Some of those could be crops like Macy’s fields of carrots, wheat, potatoes and Kentucky blue grass.

“We were using water at a record pace in April and May, while it wasn’t overly warm, there was just no rain,” says Macy.

He says it’s not just Mother Nature causing a shortage of water, but his farm in Oregon is seeing half of its normal water allocation for irrigation.

“We had 600 acres out of our 1,600 that were fallow just to have enough water for the crops that we did have planted,” he says.

For an area that produces 60% of the country’s hybrid carrot seed, and half of the world’s,  the lack of water and rain is even putting next year’s crop at risk.

“The danger would be whether we could get crops established for next season,” he adds.

Rippey says he’s keeping an eye on drought development and depleting reservoirs in the PNW, an area where dryness could persist.

“The drought that's there tends to be focused across the West and the High Plains at this point,” says Rippey. “Given the fact that we expect to see generally hot conditions in the Northwest and drier than normal weather, that certainly opens up the possibility for drought expansion or intensification in the Northwest, an area we'll have to watch for wildfires later this year. “

Lerner agrees moisture deficits are mounting, but he thinks the PNW may not be at the greatest drought risk moving forward.

“I don't think that region is going to be the focus of really the greatest dryness issue,” he says. “We are going to have to stay focused on the parts of the Midwest for later down the road.”

Rippey thinks if moisture continues to fall for the Midwest, growing conditions could be close to ideal this year.

“It really does seem like we might have a greenhouse situation set up for the Midwest,” says Rippey. “As long as we can keep the rains regular and avoid protracted periods of hot weather, we could see some really good growing conditions.”

Summer is kicking off with a heat wave the first week of June.  Lerner says the next few weeks will also be key in setting the tone for the remainder of summer.

“If June dries out more than I’m expecting and we end up coming into July with a moisture deficit already in place, that's probably going to lead us to a greater potential for stress that might impact some of that corn yield.”

PREV
China May Still Be Buying, Despite News China Will Pause Purchases
NEXT
How do You Manage the Water on Your Farm?

Big Area Could Experience Above Normal Temperatures This Week

Temperatures to Reach the Triple Digits in Southern Plains