One of the most important factors in success is loving what you do, Harry Stine says. While others might live for the weekends, Stine says the fun part for him is getting to be in the lab and field. ( Sonja Begemann )

He set up each light with care, double checked the watering rates and took one last look at the soybeans. This was it — this had to work. In 1966, when every other seed company was investing in corn, Harry Stine was taking a huge risk by investing in soybean research.

As the 24-year-old ascended from the basement of his family home, he didn’t realize the domino effect his actions would have. For the first two years Stine Seed was in business, Stine performed soybean crosses and packaged products in his basement. Today the company boasts more than 600 employees with locations across the U.S. and internationally.

“I tried soybeans, honestly, because I didn’t know any better,” Stine says. “At that point in time, farmers saved seed and most varieties were produced by land-grant universities for virtually all open pollinated crops, like soybeans. I decided if we created the varieties, we could control the market.”

While his idea would eventually become a raving success, it wasn’t without challenges. In the 1960s, soybeans weren’t protected under patent law. This meant farmers could buy the varieties Stine invested in and replant the seeds in following years.

To protect his investment, Stine required farmers to sign a contract stating they wouldn’t save seed. He used this method until the 1990s, when the U.S. patent office finally recognized breeding seeds.

While patent law was challenging, Stine had been overcoming hurdles most of his life.

“I’m dyslexic and somewhat autistic. My mother wanted to hold me back in first grade,” Stine says. “Starting out I was very slow to learn, and today I'm still slow to learn things. It wasn’t until I was in third grade that I learned to reverse everything and started to ‘get it’ in school."

While his challenges could have crippled him, he instead pulled himself up by the bootstraps and found success.

Aside from seeing what others can’t, he’s never allowed himself to use excuses as a means to cope with inability.

“My ability in many areas is less than most people, but instead of crying about areas I’m weak I concentrate on areas I’m strong,” Stine says.

He found his strength in soybean breeding. Today, by his estimates, Stine soybean genetics, traits or some form or royalty for which the company receives payment are on two-thirds of all soybeans planted in the U.S. All because he started with a crazy idea: let’s change how farmers buy and grow soybeans.

“Our focus for breeding is always on increasing yields and doing whatever we can to achieve that,” Stine explains. His quest for higher yields brought structural changes to the tall, floppy plants he remembers on his family’s 200-acre rented farm.

“When I was a boy we planted in 40" rows, and by the middle of July the plants were so tangled you couldn’t walk through them,” he says. “In plant breeding, we immediately took 1.5' off the high by selecting for the highest yielding material.”

After changing the height of the plant, he changed the canopy. In the 1960s and 1970s, soybeans had floppy leaves like corn plants used to have. Today, they stand more upright, allowing the plant to harvest more sunlight, translating to higher yields.

He didn’t stop after changing the physical characteristics of the soybean plant. For years, Stine Seed has tested various row widths, with their research showing 10" or 8" and 12" alternating rows work best.

While he’s still focused on soybean improvements, Stine wants to see what he can do to improve corn plants too. So far, he’s shortened the corn plant to about 7' and continues testing new crosses and production practices to maximize the plant’s potential.

The future of Stine Seed is one that still boasts family ownership. At 77-years-old, Stine is still highly involved in the company and the research.

“People always ask when I’ll retire, and I respond, ‘when I get old,’” he laughs. “It could be 10 years or whenever it feels right. But right now, we’re in the strongest position today we’ve been in my whole life.”

Stine has four children. Each are involved in the company in some capacity, though he let them pick their own paths, so they’d never feel cornered into joining the family business.

“Myron is running the Stine branded side, Warren is the liaison between research and marketing, Brenda is an attorney who works part time with us and Lucinda, my oldest, grew up crossing soybeans and helped us set up a site just last year in South Dakota to cross soybeans,” he says.

For Stine, living and working on a farm was never in question. Today, Stine Seed Farm is located on the same 200 acres he grew up on — except now he owns it. His house is located just a couple hundred feet away from where he grew up.

“Our motive today is the same it was 50 years ago — give better products to farmers in a more cost-effective manner because economics win,” he says. “Being able to give farmers in the U.S. and worldwide the ability to be more efficient is so fun and gives me so much joy.” 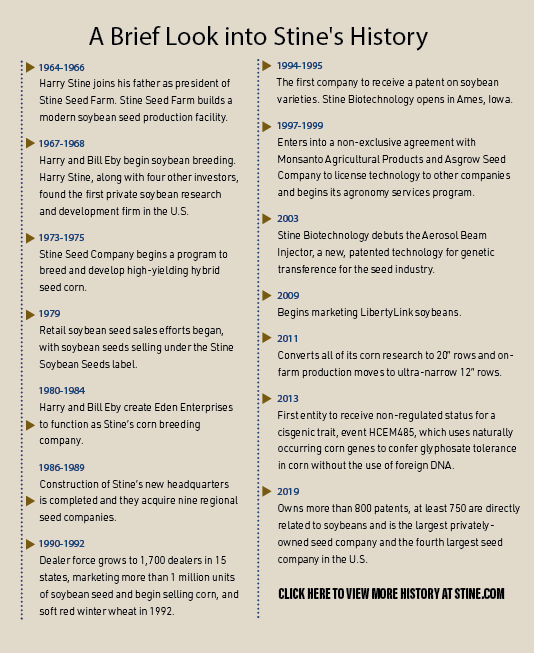 Trump Approval Strongest Yet as He Heads to Farm Bureau Convention

Phase 1 China Deal: What You Need To Know