“After the recent Tyson fire and the increase in what already seems high cost beef, the Farmers raising the beef didn't seem to profit. What's the pricing breakdown? How much of what we consumers pay does the Farmer get vs the slice of the cost that goes to production plants or retailers.”

First, because the Tyson fire made a choke point after the farmer, but before the consumer, less supply for the supermarket helped prices rise, but meat packers suddenly had more live cattle than they could handle due to loss of slaughter capacity. That plant was 6% of our total slaughter capacity. Packers had no problem attracting cattle so bids to feedlots dropped. There was just no way to pass along the consumer demand market signal due to packing plants running at full throttle. 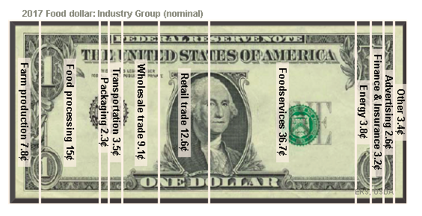 The farmer share of the consumer dollar is a regular image used by the USDA. I’m sure you’ve seen something like this. This image helps promote a feeling of unfairness, but attitude is mistaken, I think. First, we are biased by the conviction that the physical product is inherently the most valuable contribution. This belief is unfounded. It requires considerable processing to make a soybean something I would eat unlike lettuce, for example. What’s fair – even if we could agree on that value judgement – would be different for different farm outputs. Since this image is an average of all farm income and food expenditures, it doesn’t allow for cotton or ethanol either. The biggest problem is the what economists call relative well-being – we measure our satisfaction by how we compare to others, instead of whether it is enough for our needs. It also turns out that our share is remarkably stable, varying from about 7 to 10 percent. During that time my farm income has varied more than 500%. Many other slices, like agribusiness and packaging have been declining for years. 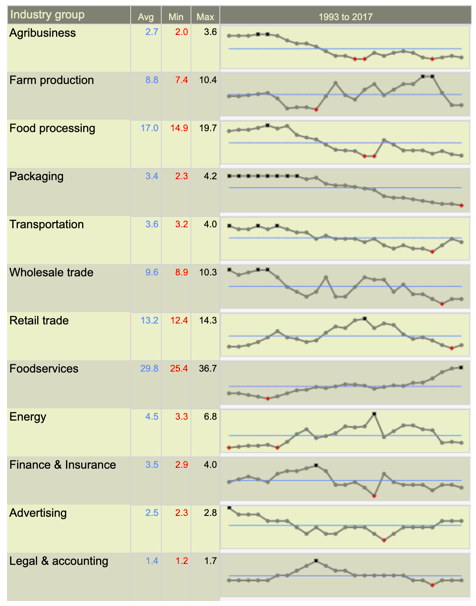 I find the food dollar imagery singularly unhelpful for farmers especially. Ours is a long value chain and worrying about which links are getting more of less that we do doesn’t make any economic difference. What does is this illustration. These are my local bids for my products. If those numbers can get me to my financial goals why should I care about how much my local elevator or food distributor makes? It’s like your slice of the pumpkin pie at Thanksgiving. It doesn’t have to be the biggest just big enough.

Non-GMO Soybeans are a Numbers Game

Weather Will Be a "Mixed Bag" This Week
2