It’s Time to Talk About Soybeans

Corn has been stealing the spotlight for months. Acres jumped per USDA’s June Acreage report, and prices have rallied between 50¢ and 75¢ since March, making them likely more profitable to grow that soybeans.

“We are really in an incredible situation,” he says.

Why? Let’s set the stage.

All of these factors bring off-the-charts uncertainty, Irwin says. As a result, USDA said it will resurvey the entire Corn Belt for updated corn and soybean production data.

In the chart below from Hubbs, pay special attention to the last two columns (click to enlarge). 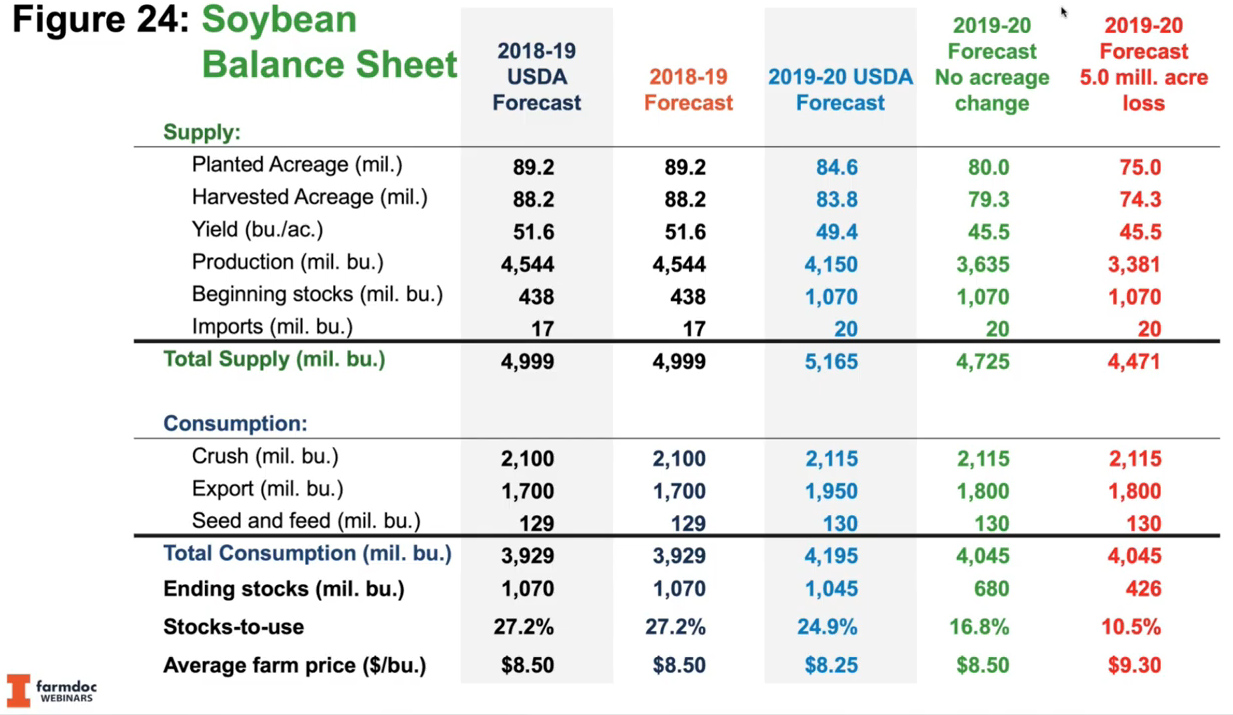 The only difference is taking planted acres down by 5 million, which adjusts the total supply and so forth. “I don’t think losing 5 million acres of soybeans to prevent plant is unreasonable,” Hubbs says.

With the same consumption expectations, Hubbs says, ending stocks would be around 426 million bu. “That’s something we’re more used to,” he says. “In my opinion, that’s a $9.30 average cash price for beans.”

If the acreage does drop, it creates a bullish picture for soybeans, Hubbs says.

“What I think most remarkable in looking at these balance sheet projections is the combination of the stampede out the door away from soybean acres, which reduced the total base of intended soybeans, plus what Mother Nature appears to be doing on both the acreage and likely yields,” Irwin says. “That means in one year it’s not unreasonable to project that we’re going to have gotten out of an extreme surplus situation in soybeans that I thought would take us many years to overcome.”

While the focus now is on soybean acreage, yields will also be a big question mark.

“From the first two weeks of June, there were 33 million acres of intended soybeans yet to plant,” Irwin adds. “Some of that is double crop, but that is a huge chunk of soybeans. If it does go in, at best, you’re looking at double-crop yields. In Illinois, our data says it should be at least a 25% hit on yields.”

Where’s the ‘Garden’ this Year?

Emergence Issues and Freeze Events Set Up A Bumpy Year