How Will Hot, Dry Weather Influence the Grain Markets?

For the last several months, the grain markets had to digest how an extremely wet spring plays out for prices. From May 2018 to April 2019, an average of 36.2” of precipitation fell across the lower 48 states. That’s 6.25” above average, according to NOAA. In fact, that time period was the nation’s wettest 12-month period on record.

Now, the grain markets will have to determine what hot and dry weather means for price discovery. At least for the short-term, that wet pattern is shifting to a drier tone.

“We should see some hot and dry weather move into the Corn Belt later this week, beginning on Wednesday in southern areas and moving its way north,” says Joe Vaclavik, founder and president of Standard Grain. “We're going to see an extended spell of hot and dry weather that should last at least five or six days.”

Here’s a look at the 6-to-10-day forecast for temperature and precipitation. 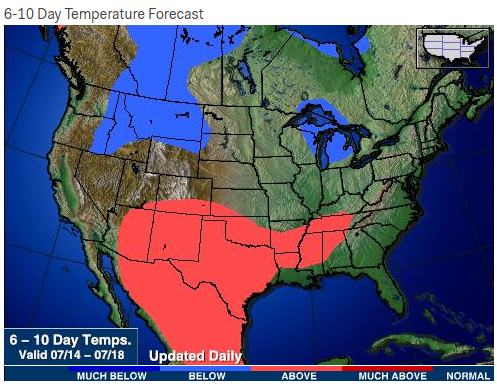 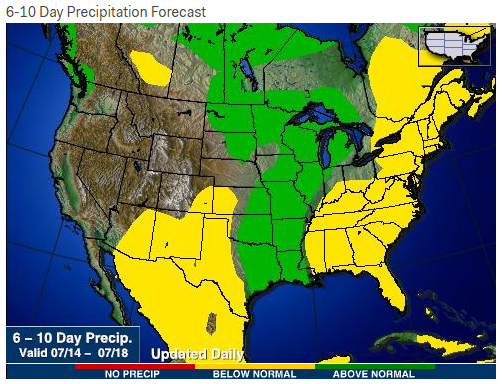 “Ordinarily, this would be a bullish forecast following the 4th of July holiday, as that’s normally when the weather market ramps up,” Vaclavik says. “This year, crops are late and highly variable. It’s a lot tougher to relate the forecast to the market, given what will be an enormously wide pollination window for the nation’s corn crop.”

This shift to toward hotter and dryer conditions has sparked some concerns, according to Oliver Sloup, vice president of Blue Line Futures. “If the hotter and dryer weather persists and becomes a trend, we would expect to see that stress the immature crop.”

With such variable crop maturities, Vaclavik notes, the forthcoming heat and dry weather could be a positive for some crops and negative for others. “Again, that’s why this weather situation is much more difficult to read than in normal year.”

Eyes Turn Toward Next USDA Report

“The tendency in this July report is they do need to make some sort of change, and they probably will,” says Steve Georgy, president of Allendale. “Expect to see some choppy trade.”

USDA will incorporate the acreage numbers from its June round of reports.

In soybeans, USDA dropped acreage, Georgy says. “The question is: Will they now drop the yield, as well?”

“Guessing what USDA will say on Thursday and guessing the final number are two different things,” he says. “USDA just does not have a very good track of predicting corn and soybean production in July. It’s typically not until August or September (probably later this year) until numbers become more accurate.”

A Big Week For The Grain Markets by Oliver Sloup

Fulfilling the Promise of Immediate Availability of Crop Tour Data

Non-GMO Soybeans are a Numbers Game
3

Wilbur-Ellis Marks 100 Years, CEO Shares What Has Led to Success
4

Grassley: Biofuels May Have to Rely on Ag Secretary Perdue for Relief
5