Gone with the Wind: How to Lose a Lifetime of Soil Health

The glaring story of soil loss in North Dakota, highlighted by the efforts of researcher Dave Franzen, is a signpost account of cost and consequence, with relevance for the entire farming industry. ( Photo courtesy of North Dakota State University Extension )

Agriculture’s past sometimes is separated from its present by the barest degree, and the glaring story of soil loss in North Dakota, highlighted by the efforts of researcher Dave Franzen, is a signpost account of cost and consequence, with relevance for the entire farming industry. Even today, after a grower works a Dakota field and looks in the back window—the soil appears as black as it did in years past. It is not. As Franzen bluntly summarizes: “People can’t believe how much soil we once had in this state. The really rich stuff is long gone and some farmers never realize that.”

When drawn away from farmland and research trials as an Extension soil specialist with North Dakota State University, Franzen speaks at field days and conferences as a sort of shock-trooper, delivering a jarring account on the state of farmland and soil health. “Awareness. I try to wake people up. When you take farmers back 150 years and show them the level of soil loss with concrete numbers, it produces an emotional and economic jolt. But it all comes with a silver lining because it points farmers toward a realization: ‘What should I be doing now?’ That’s where the rest of our NDSU team comes in with practical answers. Again, I’m just the set-up man to make farmers aware of what has been lost.”

Sun-bleached and scattered by the millions across the Great Plains, buffalo bones once lay in situ, remnants of astoundingly expansive bison herds. The bones became cheap fodder for a host of industries, and were used in sugar refinement, dry lubrication, bone China, and significantly—fertilizer production. The nutrient level of bone is roughly 3-15-0 (15% phosphate). 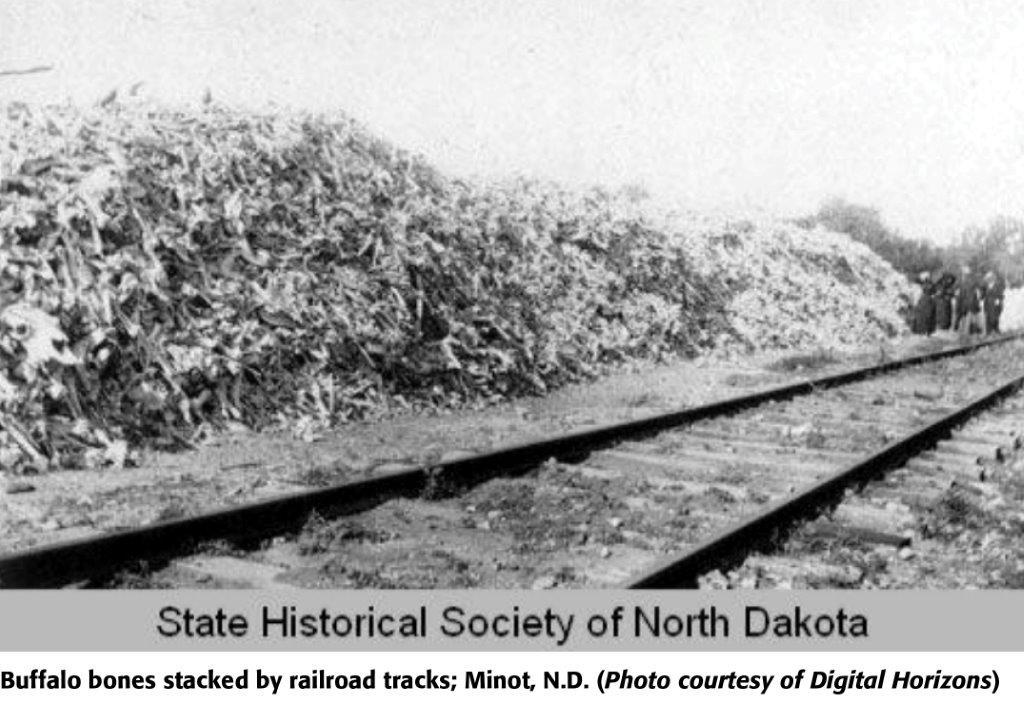 During the heyday of buffalo bone utilization, 1880-1892, as settlers spread across North Dakota and often had no income source beyond a poor crop (or no crop at all), they found a lifeline as bone collectors. Sold between $5-20 per ton, millions of tons of bones were gathered by the wagonloads across the Plains states, hauled to railheads, and shipped east, bound for the grinding boxes or chimneys of innumerable factories.

In Kansas, state records note the export of 3.2 million tons of buffalo bones. Although North Dakota lacks documentation of bone totals (records were destroyed by fire), Franzen estimates a similar export total for the Peace Garden State. Extrapolating, he makes a telltale projection on the amount of phosphate lost to shipping:  If 3.2 million tons of bones, containing 15% phosphate, were shipped out of North Dakota, the loss would equal 480,000 lb. of phosphate. “I estimate the period when settlers were selling bones for cash removed about two years of today’s phosphate use from the state at today’s present rates of application.” 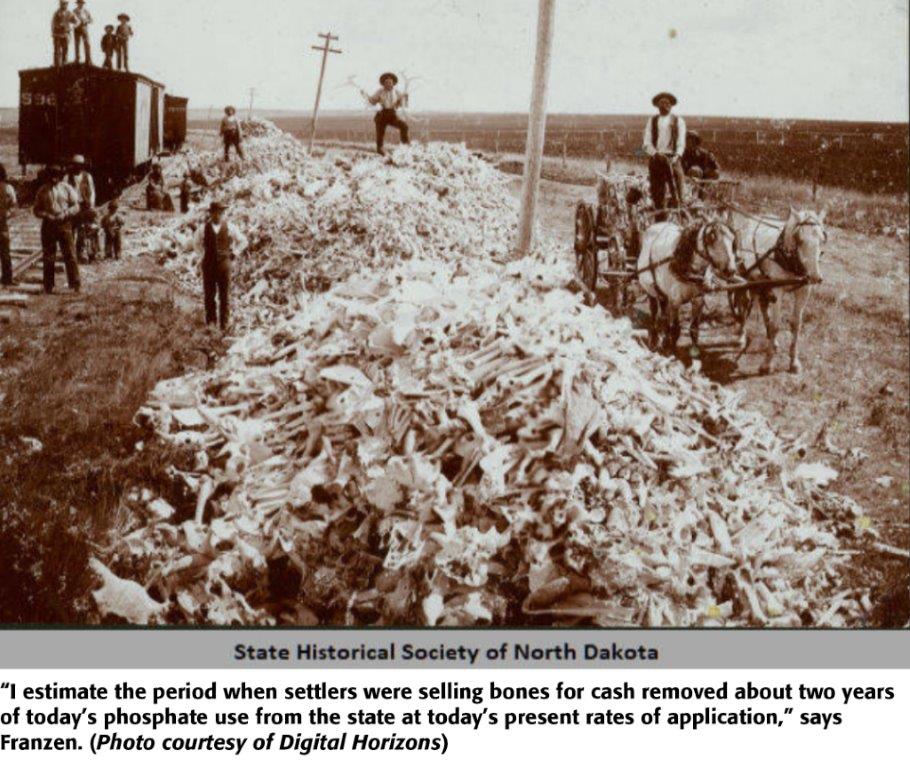 The odd story of buffalo bones, finite resources and loss of phosphate was exceptional, with no causal agent related to agriculture, but the circumstances catapulted Franzen toward the past. “The loss of phosphate through buffalo bones is only the tiniest window on a bigger story. When you look at the devastating impact of wind and erosion over the last century until today, and the loss of phosphate and other nutrients, the details blow farmers away.”

“Sometimes guys think lost soil just winds up in the ditch and can be put in back in the field. No. The ditch contains the tiniest amount of what is lost and the real numbers are stunning.”

Dust in the Wind

Prior to modern mechanization, tillage and planting techniques were limited by technological reality. Rusting in the tree rows of today, old planters are testament, Franzen describes: “They had no weight and no ability to push residue out of the way. They’re just a few steps up from the ancient Egyptians, except they’re rotary instead of poking a hole in the ground. Farmers had little choice to get a crop in, so they plowed and then disked three or four times, and turned fields into powder.” 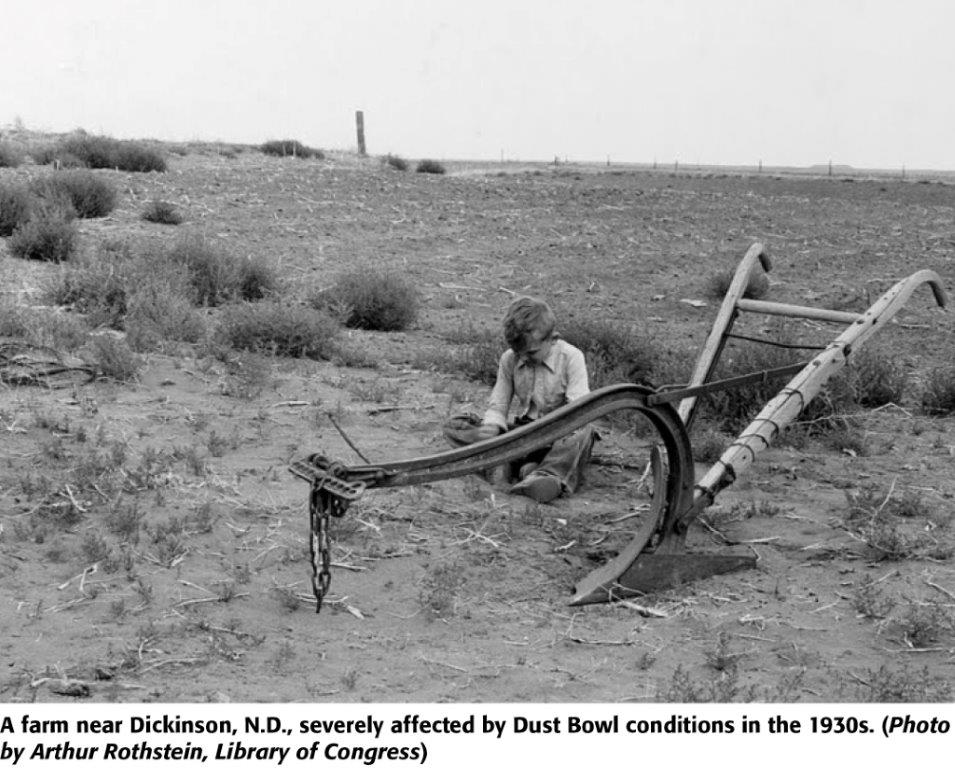 “In places where the wind didn’t blow and plenty of moisture fell, the problem wasn’t so bad. But in North Dakota, where it’s semiarid and the wind blows, it was serious trouble. Guys thought several feet of black would take care of all the problems, but the 1930s arrived and everything flipped,” he adds.

North Dakota, especially the western half, is among the windiest regions on the planet. When the Dust Bowl arrived in the 1930s, the powdered soil was primed for flight, and it blew away in cataclysmic amounts. “The plumes must have been amazing. In one 1934 storm, mail pilots encountered dust at 14,000’. Chicago and New York had to dig out of dust that blew in from the Great Plains,” Franzen details. “In New York, they took a sample of what settled in Central Park and found it was filled with more phosphate, nitrogen, potash, and organic matter than what was left behind on the prairies.” 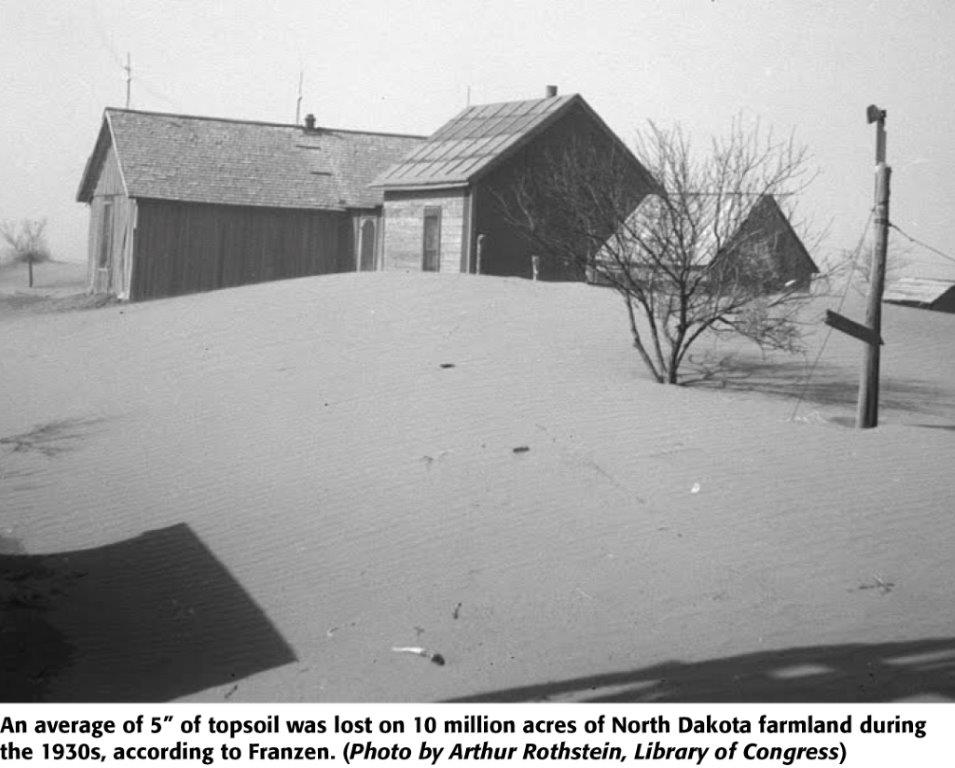 Further, according to Franzen’s assessment of North Dakota losses during the 1930s:

“We have a large expanse of grassland in this state,” he continues. “Each quarter section of grassland used to be farmed profitability, but it all blew away. Bore into some of the big hills and ridges and you’ll find trees buried by the dust. Devastating, but it holds big lessons.”

Looking beyond the 1930s, the consequences of topsoil loss are startling, based on Franzen’s projections. “If we’ve lost only 3” of topsoil since 1940 from cropped acres, that still means 5 million tons of phosphate and 16.5 million tons of nitrogen. Taken at today’s rates, that equates to 30 years of N and P application.” 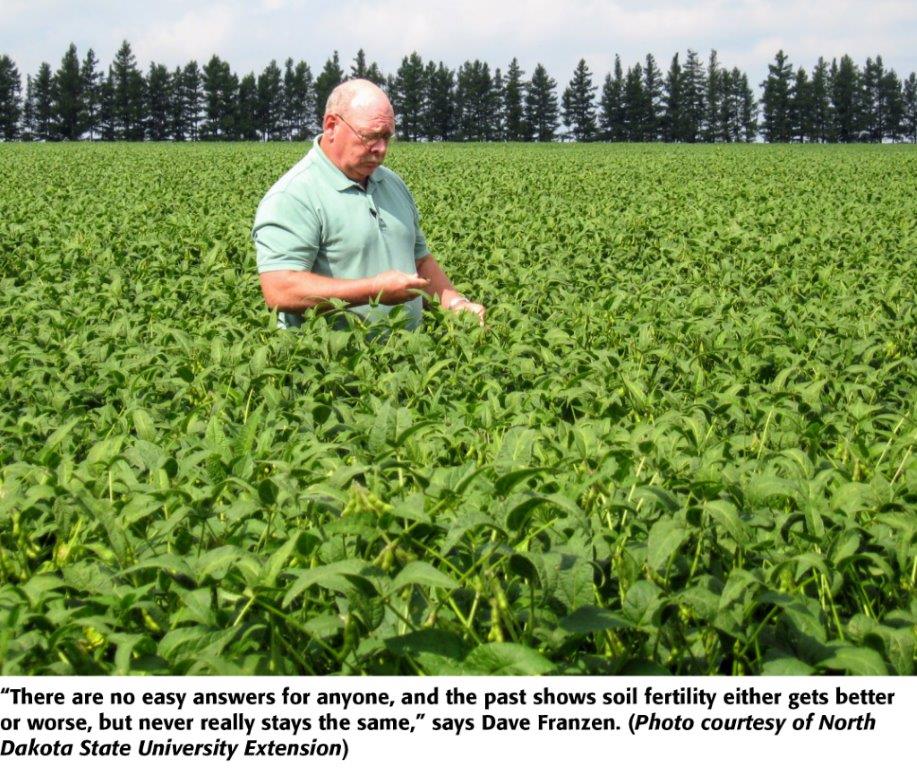 Prior to settlement, North Dakota’s original topsoil ranged from 18” deep (organic level 6%) in the western part of the state, and sometimes 3’ deep (organic level 7.5%) in the eastern side. About 200 years of zero-level soil loss, as well as continued phosphorus application would be required to take today’s North Dakota ground back to 1890 nutrient levels, Franzen projects. “Right now, we’re down to 6” deep and 2% organic matter in some spots. It’s all gone and in some places, the losses are still going on.”

How to put a lid on the massive soil escape? From Franzen’s perspective, a tractor load of stopgap measures and temporary Band-Aids all play a role, but the bottom line is no till.

Franzen has consistently delivered words of warning regarding soil loss, and his efforts have gained heed from North Dakota growers. Anthony Thilmony no tills 2,000 acres in southeast North Dakota, and the Barnes County producer says Franzen’s message is spot-on. “It turns out Dr. Franzen was right about the things he suspected,” Thilmony says. “I highly respect him and appreciate his ideas and concepts.”

“The evidence is there for a better way through no till, but it gets disheartening in winter when we get blizzards and the wind starts to blow and we watch the snow turn black,” Thilmony continues. “Sometimes it doesn’t matter how many times you tell a person how many tons of soil are leaving their land, along with nutrients, because the bell just doesn’t ring.” 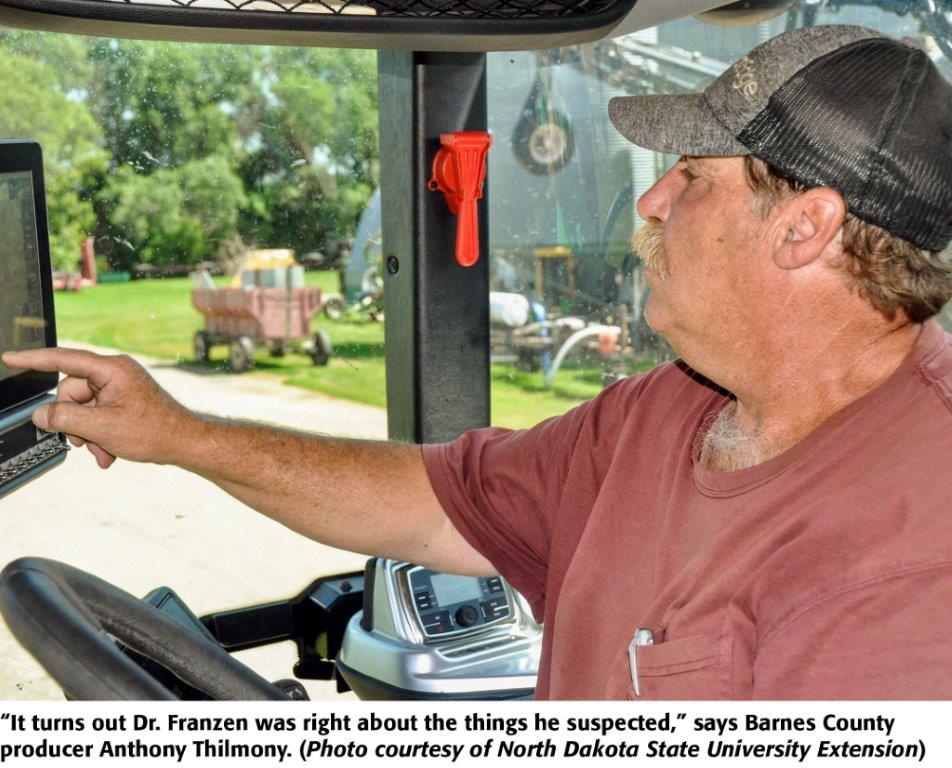 Addressing past practices, Thilmony speaks plainly: “Soil erosion is so frustrating when you see guys around the state doing recreational tillage just because their fathers did it. Every generation before did it one way. So what? With the horsepower and equipment available, guys can blacken fields faster than ever before.”

Thilmony also sees signs of change. “There are inroads and bright spots happening. Just in my farming time, tillage has been reduced, but strict no till is still not very well accepted. I’ve got to admit, I don’t understand when guys won’t even consider no till.”

Altar of the Immediate

In the 1970s, many farmers on the western side of North Dakota began no till practices. “The move was farmer-driven, and then Extension climbed on, USDA climbed on, and more farmers in the east joined in,” Franzen recalls. “The west part of North Dakota is now pretty much all no till—maybe 98% of crops acres west of the Missouri River are no till. In the east, they still have black, but it’s not as black as it was when their great-grandfathers were farming.”

Joe Breker (Havana, Sargent County) began no tilling in 1979, and 40 years later, Franzen describes “phenomenal” soil changes on Breker’s ground in North Dakota’s southeast corner. “Joe has raised organic levels from 2%, and has hillsides that are 6.5% organic, and some level areas of 7.5%. The soil’s not 2’-3’, but it’s still 10”. To regain depth will still take a few more generations of consistent activity,” Franzen explains. 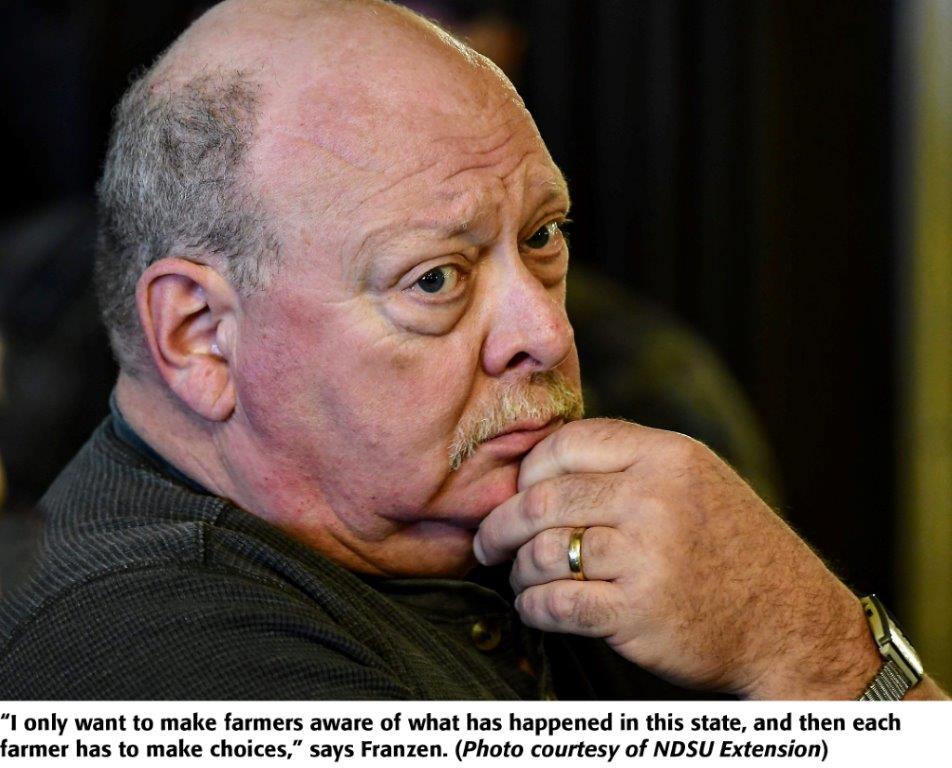 Franzen believes North Dakota farmland generally requires approximately six years of no till to change soil biology. (Four years, he says, may be adequate for clay.) “There are no easy answers for anyone, and the past shows soil fertility either gets better or worse, but never really stays the same. Buffalo bones and the extremes of the Dust Bowl are examples that connect economics and emotions. I only want to make farmers aware of what has happened in this state, and then each farmer has to make choices.”

The history of topsoil depletion proves the danger of sacrificing the permanent on the altar of the immediate, Franzen contends: “That’s not dirt you see leaving the state—that’s the future of farming.”

PREV
New OSHA Inspection Process Video
NEXT
John Phipps: The Ethanol Debate Could Be Trivial By 2023

China Needs to Make Bigger Buys to Make Up for Ethanol Losses in U.S.

Prepare for the Long-Term Care of Your Farm
2