“In less than 20 years, I believe hemp will be established as a top five crop, and it’s going to be a way to help save the family farm,” says producer Don Collins. ( SoCal Farms )

All in on hemp. Ear to the ground in 2011, Don Collins prepared for change as he listened to rumblings of the first genuinely new crop of his 45-year career, eventually handpicking a farming team to move into place when the legal barriers to hemp production toppled. Enter SoCal Farms and a five-man squad with all eyes on a hemp prize: 300 acres for cannabidiol (CBD) in 2019, with plans for 1,000 acres by 2020, 2,000 acres by 2021, and far more beyond. The future of agriculture, according to Collins, is stamped by hemp’s footprint. “In less than 20 years, I believe hemp will be established as a top five crop, and it’s going to be a way to help save the family farm.”

Against the backdrop of a blistering global hemp market on pace to hit $5.67 billion by 2020, and further clip $14.67 billion by 2026, SoCal Farms is a vertical operation handling cultivation, processing and distribution—production from seed to checkered flag. Helmed by Collins as president, SoCal intends to provide a year-round supply of CBD to buyers at large quantity.

Sitting on a Crop

In 2011, hearing the hemp train around the bend, Collins began extensive research, and quickly was drawn in by a crop that drank significantly less water than alfalfa or cotton. “From a marketing standpoint, it was unreal and looked like it might be seven times more profitable than alfalfa. But even today, it is still a Wild West crop with its own unique dynamic.” 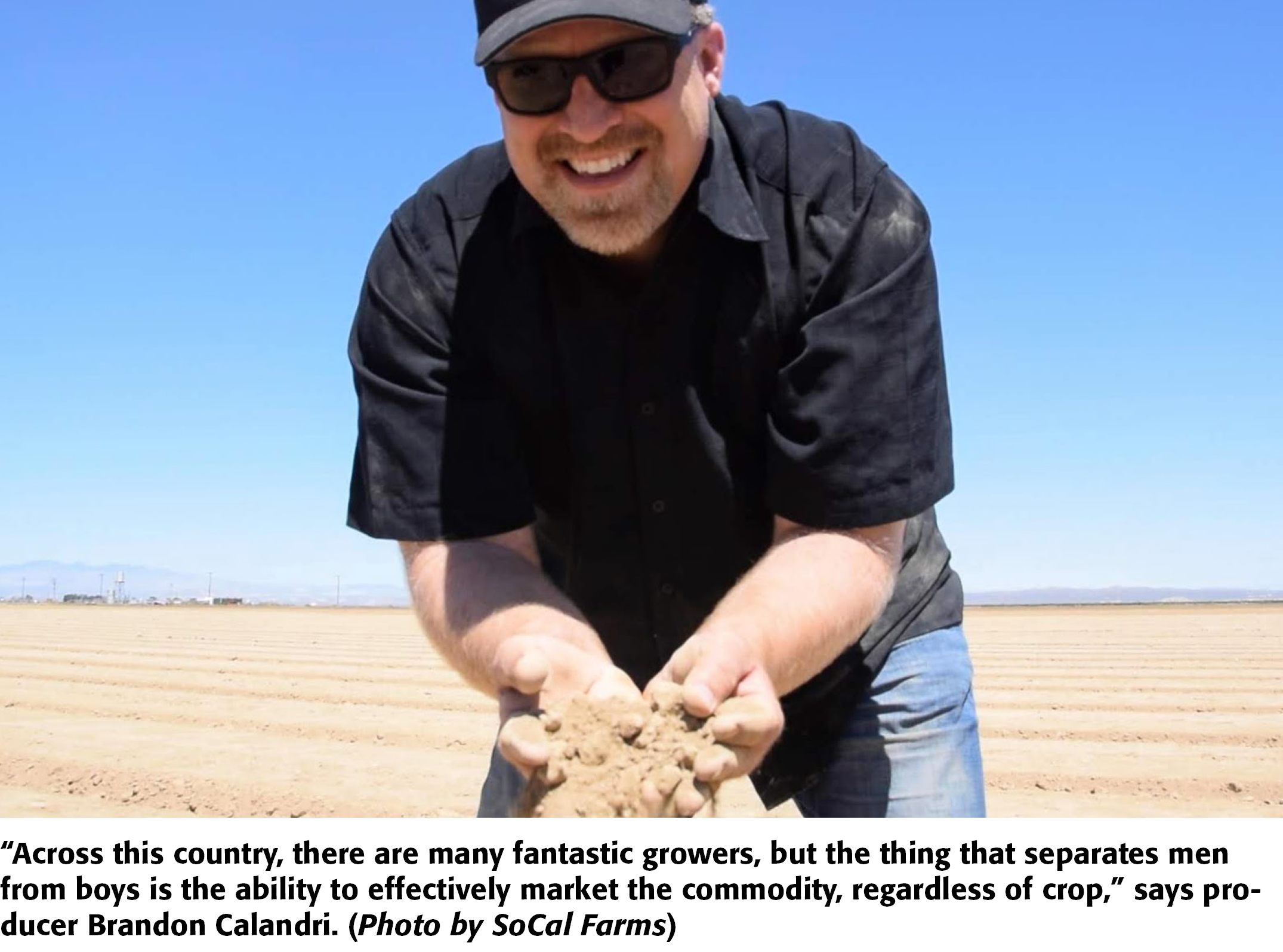 For all of hemp’s promise, Collins knew major holes existed in the crop chain, including infrastructure, marketing, mechanization, technical support, pest management, nutrient guidelines and more. Yet, he was also attracted by the allure of a crop without commoditization, and one which might provide more stability away from the caprices of a global market. Hemp demand, he contends, will be centralized to the U.S. market for the coming decade.

If you’re interested in learning more about growing hemp on your farm, click here to see future Hemp College dates.

Sitting atop his entire 2018 cotton crop, Collins is keenly aware of world market hitches. “Because of the tariff situation, I’ve still got all my cotton from last year because of reasons beyond my control. I may agree with those reasons, but they’re still out of my control.  At least for the next 10 years, just U.S. demand by itself will take care of our hemp acreage.”

Collins sought out marketing, branding, transport and farming help for a joint venture in what he believes is ideal hemp ground in the high desert of Antelope Valley (north Los Angeles County). With the addition of four teammates from the Antelope Valley and 15,000 total acres, SoCal Farms was born.

Brandon Calandri, Calandri SonRise Farms, hopped aboard, in charge of overall farming operations. “Everyone was hand-selected based on specific talents,” Collins recalls. “Farming expertise for hemp closely follows vegetables with things like irrigation management, so I went to Brandon, a vegetable guy from seed to sales who knows it all. He plants, grows, harvests, packs, stores, and delivers—and understands vertical integration.” 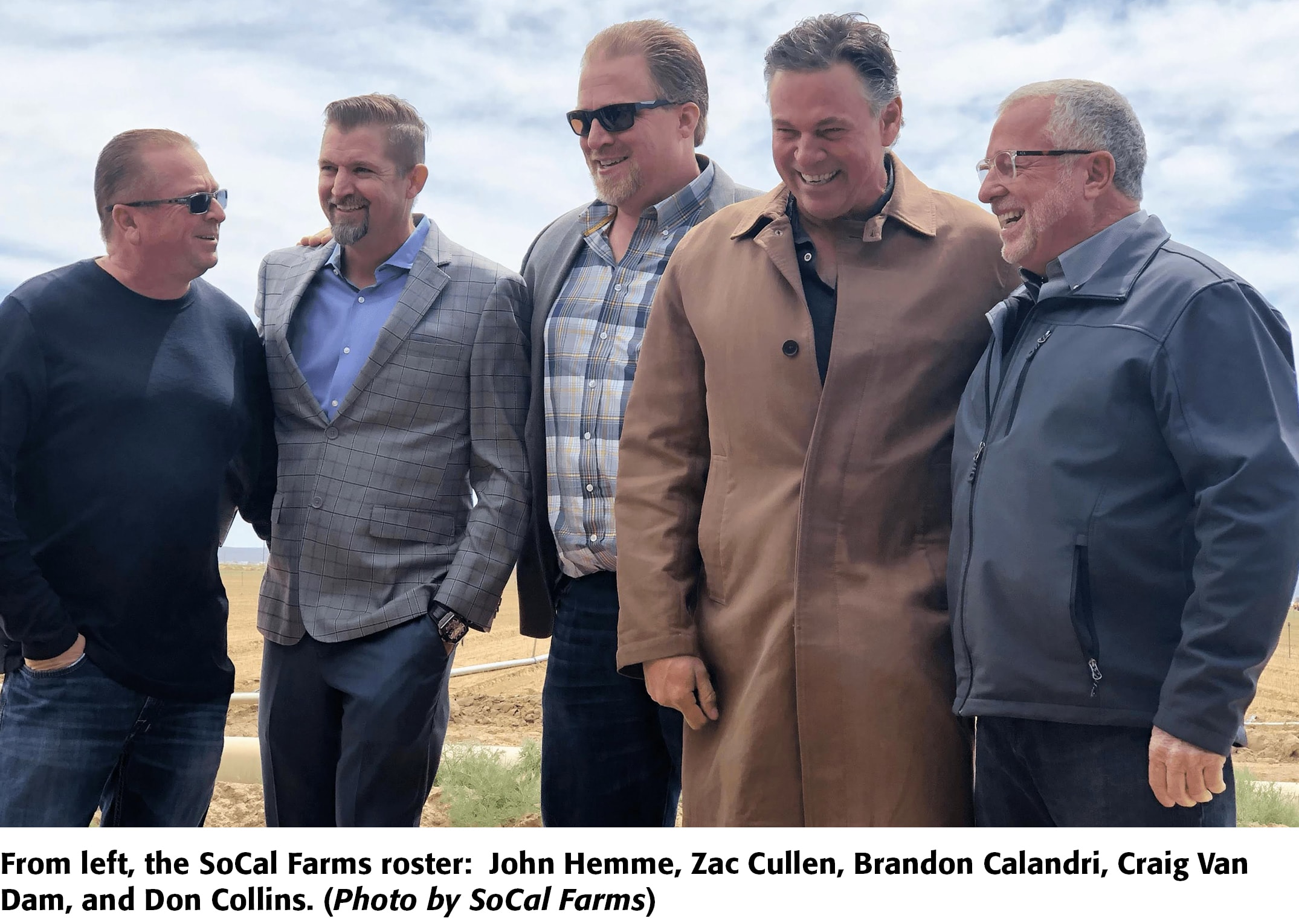 Next up, Craig Van Dam, Van Dam Farms, took the reins of finance and asset management. “Like Brandon, Craig’s a third-generation grower here, with deep experience on alfalfa, grain and dairy. Craig already has the organic supply of nutrients and fertilizer we need to supplement hemp. Both he and Brandon bring a tremendous amount of farming expertise.”

What about moving product? John Hemme (Hemme Hay & Feed) slotted into logistics and transportation. “John knows how to move anything and everything, owns retail outlets and is our trucking guy.”

Collins still lacked a key player to build a brand. Enter Zac Cullen for sales and marketing. “Zac Cullen owns insurance agencies, and runs in digital and marketing spaces,” Collins notes. “He is our guy to fill the branding space and knows how to do it.”

Prior to pulling the trigger as president of SoCal, Collins visited 50-plus hemp operations west of the Rockies, in a bid to discover as many hemp rights and wrongs as possible. Collins was surprised by the lack of foresight he encountered, and recalls only two operations undisputedly on the “road to success.”

Both of the exemplary operations were founded on a key ingredient: preparation. “I found these guys who had done so much homework and were thinking outside the box on cultural practices. They were not arrogant, recognized how much they didn’t know, and made few assumptions. Every day, they were learning something and building the knowledge. After seeing their attitude and farms, that’s when I knew we were marching in the right direction.”

After navigating a slalom of red tape and regulation, SoCal made a decision to approach the public, prior to kickoff, and present an open-book policy in order to decouple from the politics of the marijuana industry. “Brandon took the lead and we went into the church community to let people know what was going on and what we were about,” Collins recalls. “It was vital for us not to trample anyone’s beliefs, and part of that is making sure we are always available to answer questions about what we do. As farmers, sometimes we hurt ourselves by staying behind the fence and not telling our story.”

Boots on the Ground

In April 2019, SoCal planted 650,000 feminized seeds across 100 acres, using high-density seed planters with slight modifications, on 80” center-to-center row spacing, atop 6” high beds. The beds have a raised top with a width of 64”, with two drill rows 13” in from each bed edge. Each plant is spaced 24” apart. 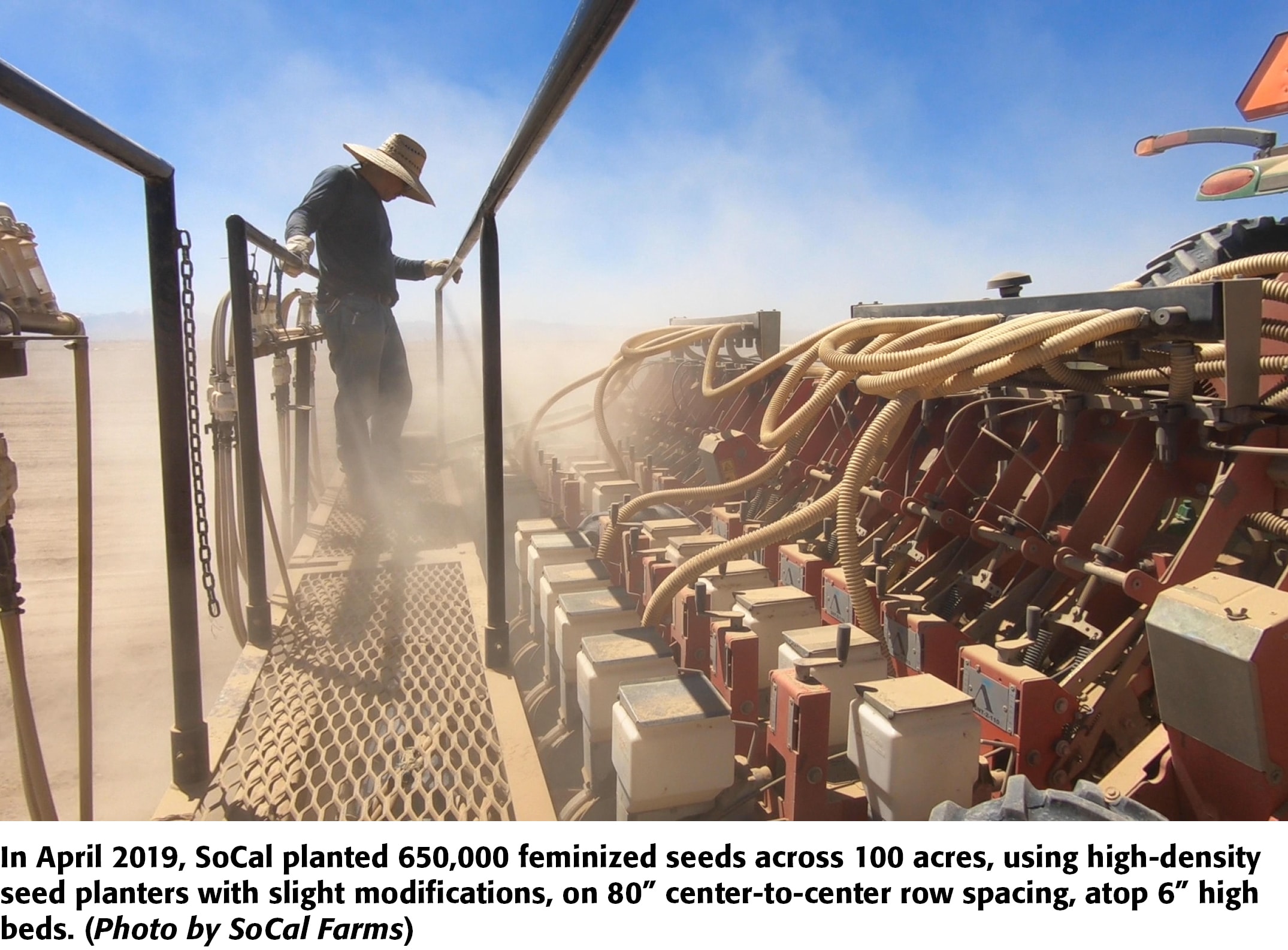 Sprinklers were used until the plants reached 8-10 2-leaf stage, followed by drip irrigation. Overall, Collins expects the plants to consume 2.5 acre feet of water, and reach 24-26” in height. “Our goal is to do this right, and we can’t just do everything by dollar decisions,” Collins says. “The No. 1 management mission is boots on ground, looking for any issues. Some people somehow think you plant hemp and walk away, but that simply isn’t the case.”

Learning on the go, Collins anticipates three harvest modes. One, running forage harvesters and wrapping bales. Two, mechanized harvesting with a South Dakota company and a prototype machine. Three, total hand harvest.
Collins aims for full-spectrum cannabinoid extraction from the entire plant: “We hope to use every ounce of the plant, even what’s below ground eventually in time. We’ll follow harvest with another planting (200 additional acres in 2019). Because of our weather, we think we can get in two crops: An early, spring-planted one and a summer-planted one.” 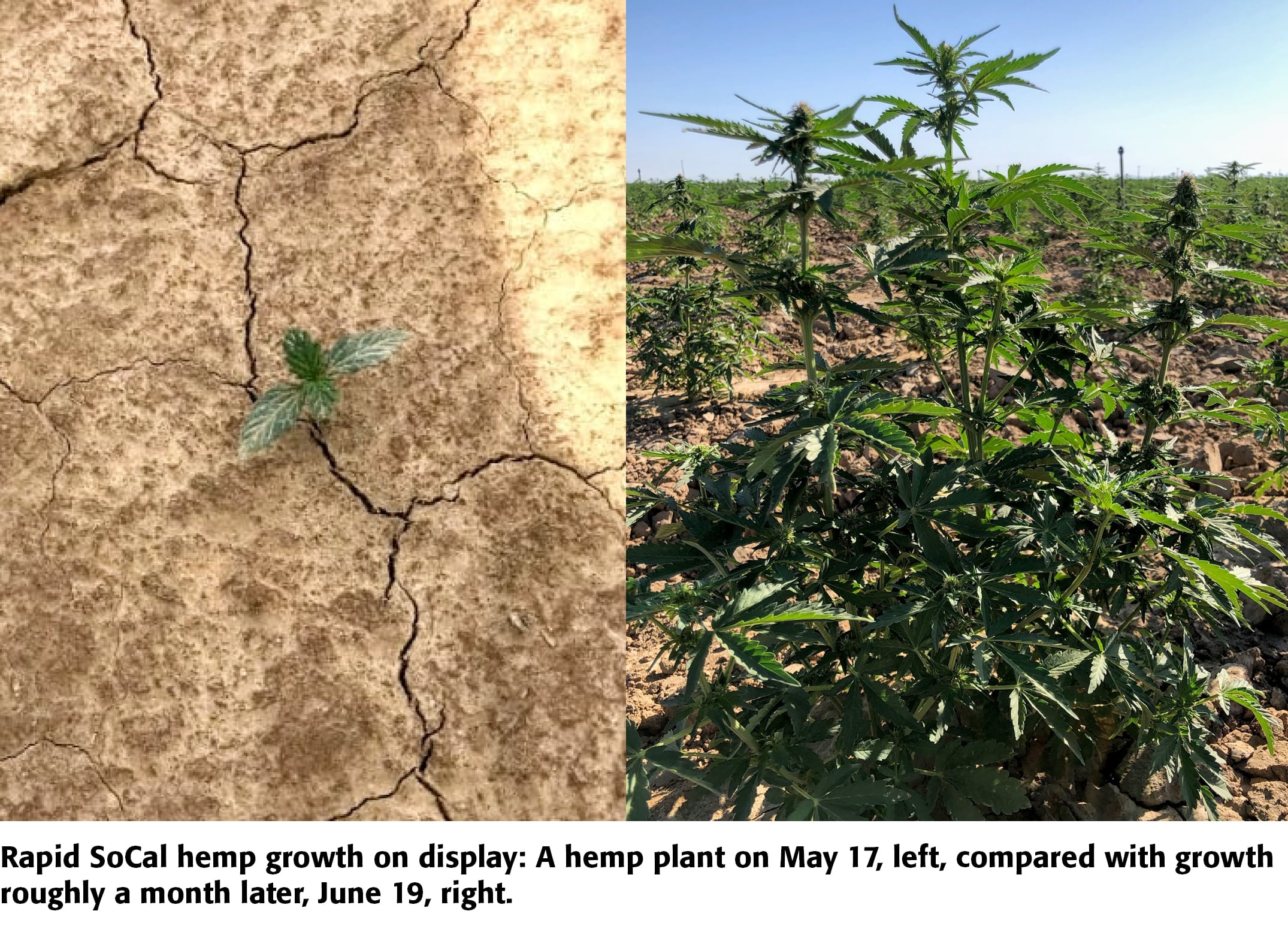 Beyond harvest, SoCal intends to be involved directly in processing and distribution, and has purchased an 80,000 sq. ft. building (40,000 sq. ft. processing space and 40,000 sq. ft. cold storage) in the Antelope Valley. “We have a strategic alliance with a processor out of Colorado, and we plan on building a grower network where we can actually support and help other farmers develop hemp programs and expand our supply and take on some of the bigger additive needs for food, cosmetics, pharmaceutical and supplemental groups.”

One of the major drives for hemp, Collins insists, is the domestic market. “We’ve got real opportunity as farmers with a new commodity that isn’t globally driven, and that is a big, big deal.”

A major consideration for growers, according to Calandri, is market access. “Do you know the post-harvest program that’ll it’ll take to support an industrial hemp crop? Across this country, there are many fantastic growers, but the thing that separates men from boys is the ability to effectively market the commodity, regardless of crop. You always have to consider your marketing program first and foremost.” 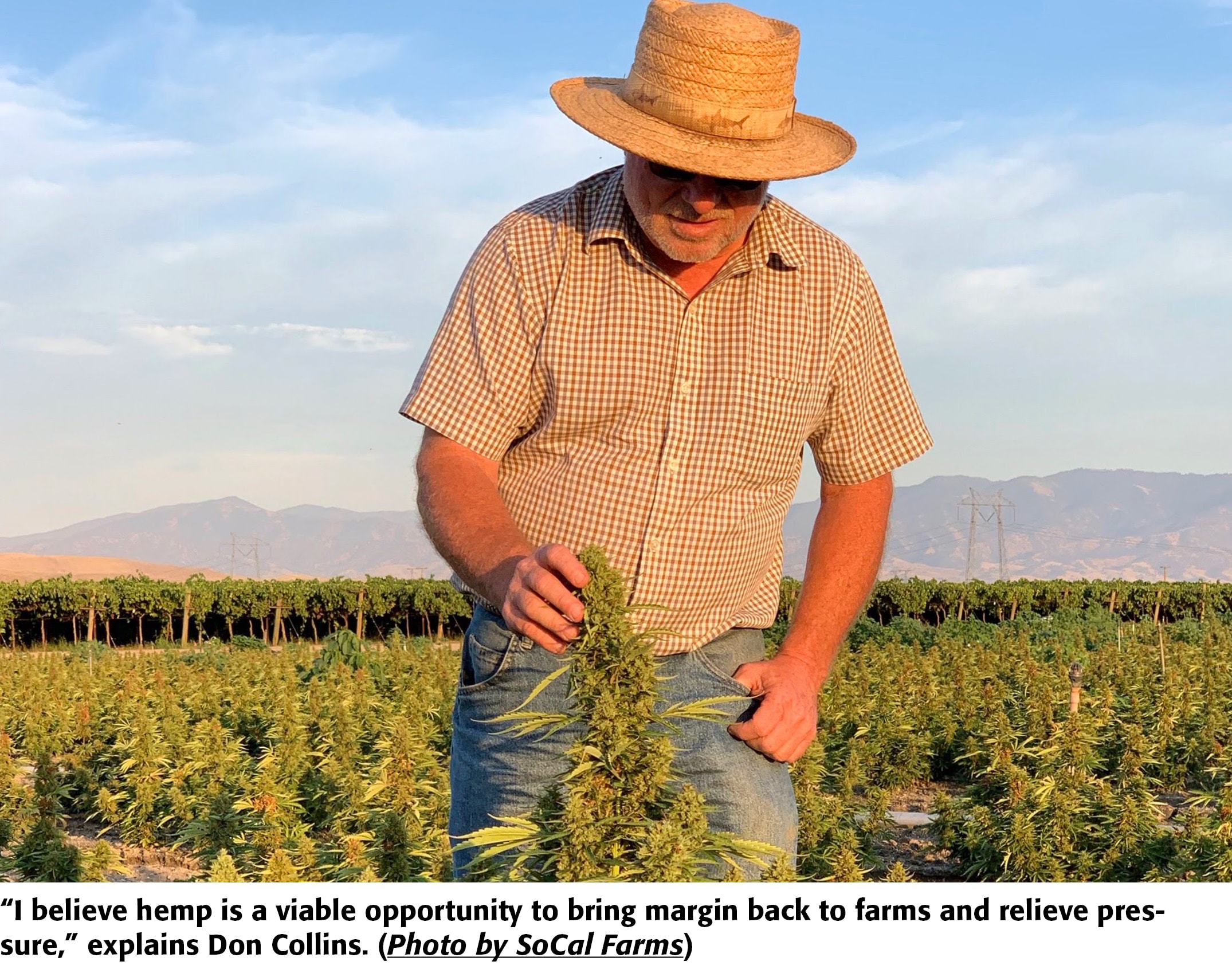 Echoing Calandri, Van Dam urges potential hemp growers toward a heavy amount of due diligence. “Look at the processing and do your homework. Do your required research and make sure that when your crop comes off, it has a good place to go with good return.”

Opportunity at the Gate

“We’re always going to have at least some type of diversification at SoCal. As hemp acreage builds, this new crop is going to help all the old crops because it will take away pressure,” Van Dam says. “Soybeans, corn, alfalfa, or whatever major crops are out there are going to be helped by hemp acreage.”

“This is a brand new crop for my generation,” Calandri adds, “and a future heavyweight crop. I remember a time when people were concerned about almonds and market oversaturation, but ultimately, new crop applications evolved as acreage increased and now we’ve got everything from milk to grease for the military. The same thing will happen for hemp.”

Collins concludes by emphasizing the overall benefits of hemp production. “I believe hemp is a viable opportunity to bring margin back to farms and relieve pressure. This is a genuine step in the right direction to save family farms. It’s a boon to the environment as well, and a job creator, and just as we once did with cotton—we can teach the world how to make hemp work.”

PREV
Ferrie: June Corn Is Taking A Big Hit From Aphids
NEXT
Exclusive: NASS Chief Sits Down For One-On-One Interview

Heartbreak Amid Cancelled Farm Show: "This Is My Last Year to Show"
2

Bayer donates 3 mln malaria tablets for use against coronavirus