Nathan Holmes took a business idea born in his Missouri rows, launched it into the startup market, and returned the product full-circle to the farm. ( Photo by Blake Thomas, RLT Productions )

Nathan Holmes was sick of waking at 2 a.m. in a cold sweat, entirely blank on whether he had turned off a particular well pump on his farm. Maybe? Maybe not?

Tired of bleeding efficiency and weary of fighting a logistical nightmare, Holmes initially created a DIY, on-farm smartphone remedy solely for his operation, and then partnered with a tech company to take the solution to market. The result is PumpTrakr, a remarkably simple and low-cost irrigation app that manages pump locations, activity, fuel, maintenance and more.

Holmes created PumpTrakr to allow for real-time irrigation communication between all team members on a farm in order to save time, labor, fuel, and stress. The flexible platform is as basic or advanced as a grower chooses—hardware is entirely optional. PumpTrakr is a practical answer for irrigation management, and is also the unusual story of a business idea born in the rows, launched into the startup market, and returned full-circle to the farm.

On 2,700 acres in the Missouri Bootheel, Holmes, 39, is 100% irrigated and grows corn, rice, soybeans and wheat, with the vast majority of the land watered by polypipe, and the rest fed by a handful of pivots. Stretched over Scott County from Oran to Sikeston, the span of his ground takes approximately 40 minutes to drive from end to end, and contains 27 wells.

Holmes left the farm for university in 1999, and left four years later with a degree in agribusiness, and a considerable load of computer classes under his belt. “I had no idea if I’d ever use the computer lessons on our farm, but it was all so interesting and I learned so much. I took as many computer science electives as my schedule allowed,” he recalls.

After Holmes eventually returned home and jumped back into the farming rhythm, the computer textbooks were forgotten, pushed aside by the demanding schedule of crop production, and then entirely buried by marriage, fatherhood and life. Out of sight, out of mind. And then came 2012, when Mother Nature slammed the Bootheel onto a drought anvil, and hammered away. 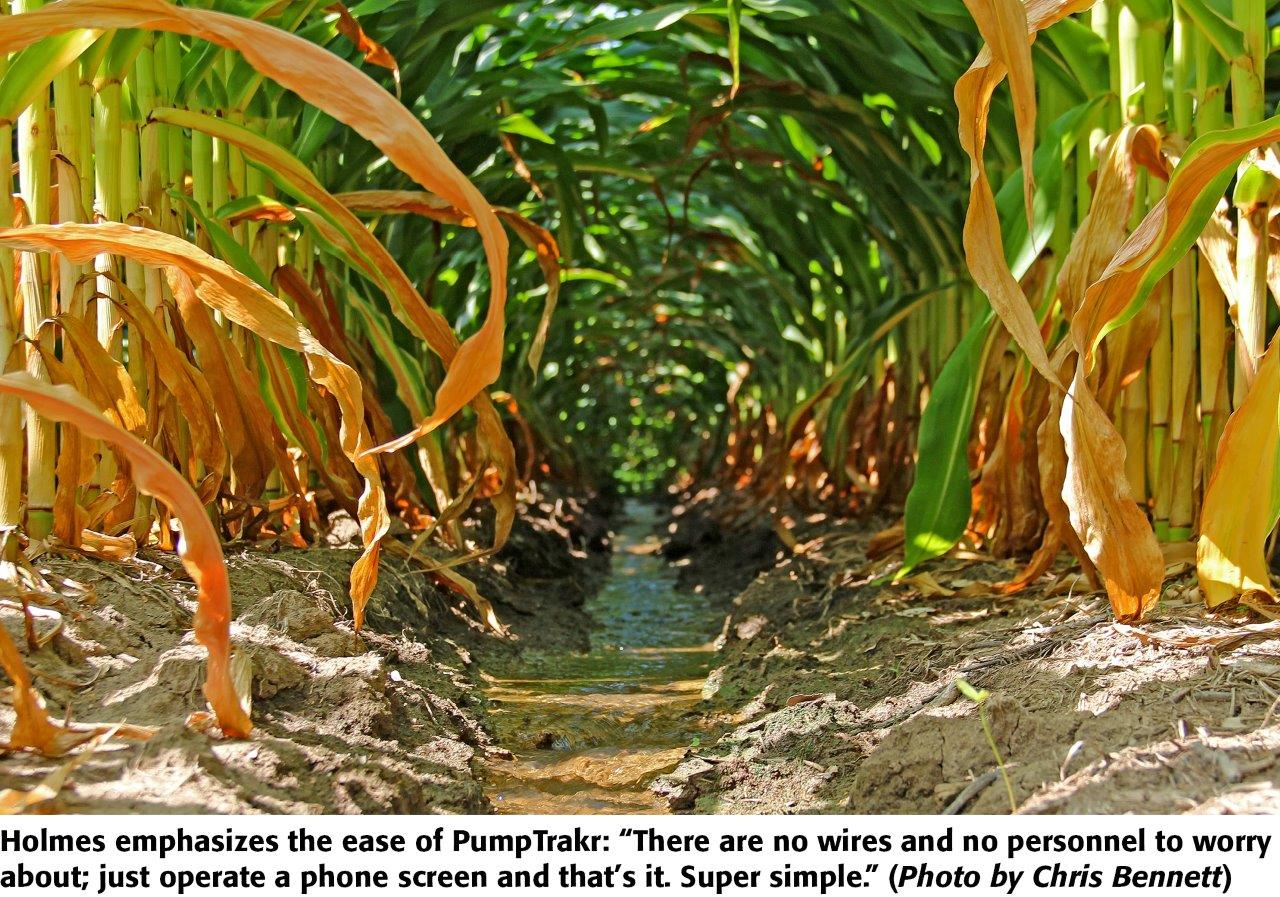 “It was dry as a bone,” Holmes recalls. Driving down turnrow after turnrow, pulling long trains of Scott County dust, Holmes was a farming version of a firefighter, incessantly checking on wells and dousing his crops with heavy amounts of water.

“You talk about being stretched out. We ran our wheels off trying to keep everything covered in the correct amount. I was already using Pipe Planner, and I always want to get things exactly right, but physically getting to the sets and switching as needed was nearly impossible. When you’re losing money and wearing yourself out, the stress gets bad—really tough.”

At first glance, irrigation appears simple to the uninitiated—almost an either-or scenario where the water is turned on and the story ends. In reality, the irrigation cake is deeply layered. The more a producer fine-tunes water output for maximum crop benefit and cost, the more tangled the logistics. The corollary is inescapable, Holmes describes: “It’s a can of worms and as you try to manage to the nth degree to get the most out of your fields, the harder it is to keep up, and that’s when you need automated help.”

Determined to boost irrigation efficiency on his operation, Holmes looked around the market for the best options. “I needed something that would put me, my dad, and all my employees on the same irrigation page in real-time, and was easy to use, but there was nothing out there that was affordable,” he says.

Frustrated, but spurred toward innovation, Holmes dug into the back of a closet and pulled out several college textbooks on coding, cleared a chunk of memory on his computer, and set out to write an irrigation app. The results, particularly for a novice, were formidable. “It was really more of a proof-of-concept application to get us all connected on irrigation,” he says, “but it worked on my server and on my guys’ phones. I knew it could be so much better, but still—it worked.” 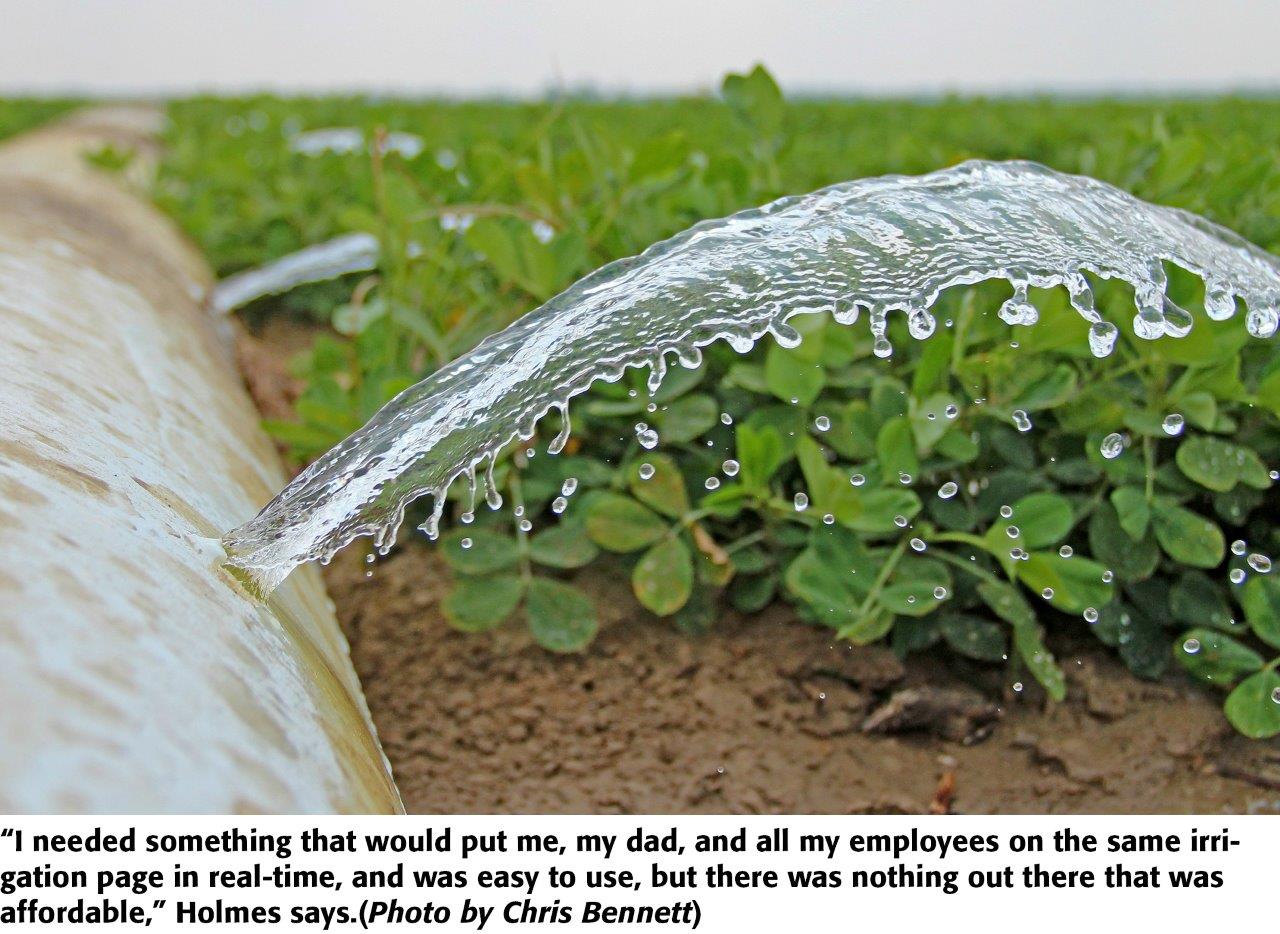 Within several months, Holmes’ app effort caught the attention of several farming friends, and the requests for installation began to mount. Trickle to flow, an overwhelming push from other growers woke Holmes to a bottom-line truth: His irrigation problems were the exact problems experienced by other growers. He began looking online, searching for a tech company to take his irrigation app to full fruition, yet at the same time, Holmes was wary and gun-shy, afraid he might get skinned in the exchange.

“I was nervous, but I found an app-developing company called Codefi and they turned out to be the best people I could have ever imagined working with. It didn’t take long and the app was ready. PumpTrakr is as advanced or basic as any irrigated farmer needs regardless of farm size, and the efficiency is awesome.”

“Driving Around In Chaos”

At its basic level, the PumpTrakr app requires no hardware or cellular modems, Holmes explains: “Go in the portal and set up your farm, which means naming the farms, fields, irrigated sections and wells. Basically, you’re going to break down the data so that out in the field, your guy with a phone just clicks on a well, and says , ‘’I’m starting up a well,’ and he’s taken right to that particular well and sections. It captures location, pump, and flow and keeps a record.” 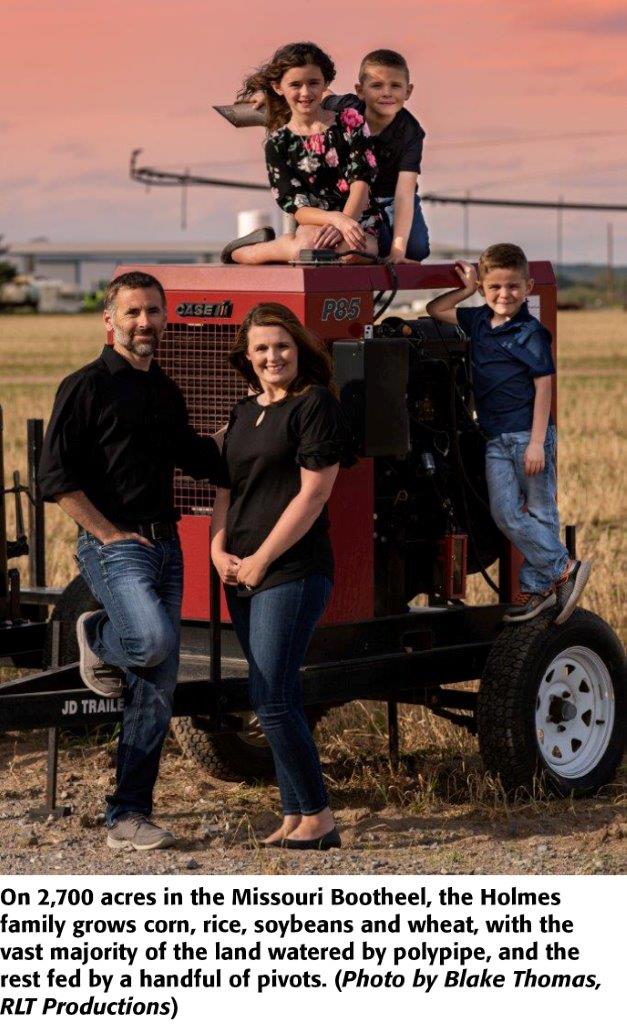 “A note is automatically recorded that a pump was turned on at 9 a.m. and needs to shut down at 9 p.m. The well on the map turns green and it shows on everyone’s phone. You can set reminders to shut down or for whatever you need, and the app monitors fuel, notes, maintenance records, parts logs for sharing, and fuel info for tankers. It’s incredible efficiency with no hardware required.”

PumpTrakr options include automated pump control devices. The modules can be salt-and-peppered, with automation as needed, Holmes explains. “You can easily automate any pumps you need, and leave the ones outside your door on human control. Again, hardware is entirely optional. It’s totally up to you.”

Holmes compares PumpTrakr’s ease of function with Ring Video Doorbell: “There are no wires and no personnel to worry about; just operate a phone screen and that’s it. Super simple. You can put it on a 1970s power unit just as quick as you can put a brand new one into the system.” 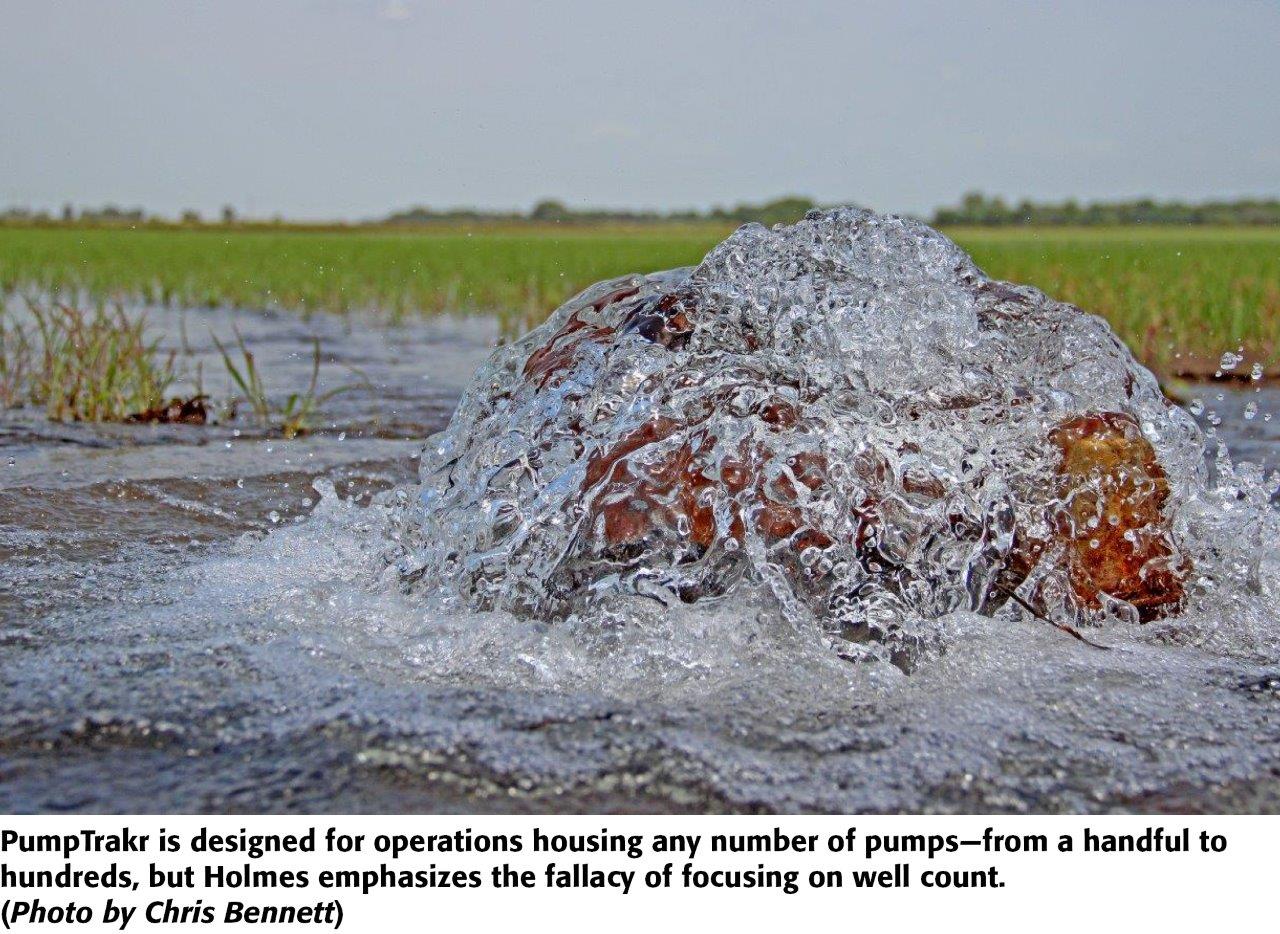 PumpTrakr is designed for operations housing any number of pumps—from a handful to hundreds, but Holmes emphasizes the fallacy of focusing on well count. The key to irrigation scheduling, he contends, is to recognize the nuances within the sets.

“We used to measure by how many wells a farmer has, but irrigatable sets are what’s important. Let’s say each well pumps 2.5 fields, with each field subdivided into sets. Across big acreage, you have to able to see each set in real-time, because each one has a unique duration, program and layout. The last thing you need during all that is a fleet of employees driving around in chaos.”

Despite ample merit and potential, farming ingenuities often don’t spread beyond point of origin, or else frequently die in seclusion. In the case of PumpTrakr, Holmes’ says his experience with Codefi was invaluable: “Codefi took my idea and developed the phone app and tied hardware to the app. I also won a yearly Shark Tank-style competition they sponsor, and received a grant boost. Then I got additional help from some great people at Verizon who were eager to help farmers, and they worked with me to get data rate prices way down across an entire farm.”

Codefi’s expertise is centered on software expertise and app construction. The nonprofit, Cape Girardeau, Mo.-based company is heavily involved in the digital technology industry, describes co-founder Chris Carnell: "We work with you to help you develop your idea. Farmers are often more interested in solving their problem and continuing to run their farms, rather than building technology and starting a company with it. Codefi builds software to help you on the farm, and can help start a company that gets the technology to others with the same problem. We try to create a win-win-win for everyone." 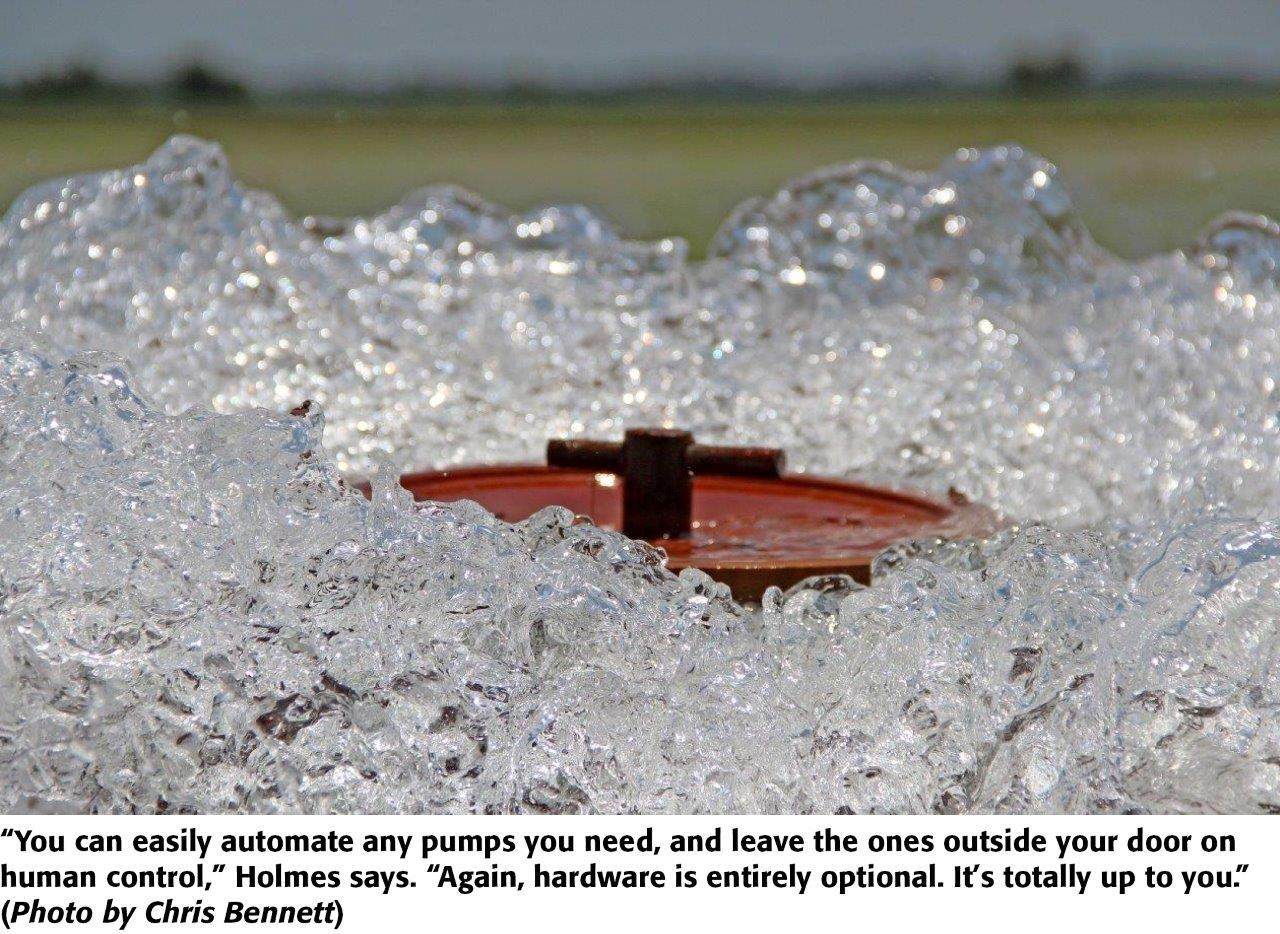 PumpTrakr completed beta testing in 2019 and is available for the 2020 season at the App Store or Google Play. “Just one look at your phone and you’ll know right where you’re at with PumpTrakr,” Holmes adds. “As we move forward, we’ll be adding tons of features, and this is going to get better and better.”

4 Questions To Ask Before Switching From GMO to Conventional Crops

Watch for ‘An Early Low’ With Corn Prices

3 Scouting Tips to Stay Ahead of Tar Spot

EPA Yet To Decide On Retroactive Refinery Waiver Requests: Senator
2

Is China Living Up to Phase One Trade Agreement Obligations?
3