There are several starter fertilizer attachments on the market. In 2019, the four pictured below were used on an 8-row Kinze planter. ( Darrell Smith )

Does the fickle weather have you wondering what you can do to start your crop off right this spring? Are you continuing to push the envelope on planting date? This winter, Farm Journal Field Agronomist Ken Ferrie has fielded a variety of questions on starter fertilizer – one way to weatherproof early season plant growth, especially when soils are cooler after planting.

Starter research isn’t new for the Farm Journal Test Plots. In fact, it’s the longest running plot effort. However, as farmers hone in on ROI and nutrient stewardship, Ferrie and his team are testing planter attachments and embracing the 4R concept of the right fertilizer source at the right rate at the right time and the right place. Starter fertilizers help lower overall application rates because they are placed in the soil and close to the plant.

“Timing is determined by the environment – when does the plant need the nutrients to be satisfied all season long? Then timing sets the scene for placement. Placement strategies dictate the source and rate,” Ferrie explains.

When it comes to starter, Ferrie has found the definition varies.

“Some growers say it’s phosphate with microbes. Others consider starter as straight 28% or 32% UAN with a little sulfur. Still others think it’s microbials, so-called bugs in a jug, or a liquid you put on with the planter,” Ferrie notes.

Ultimately, Ferrie says phosphate is the major component in a high-performing starter fertilizer.

“Phosphate is critical because it’s the source of energy that drives growth at the start of the plant’s life,” he explains. “Thanks to phosphate you get bigger, taller plants with wider leaves.”

There are two keys to placement: Put the nutrients where the plant can access them and never disrupt the seed.

Unlike nitrogen, phosphate moves very little in the soil, which means it needs to be placed where the early root system will grow through the bands of fertilizer.

The in-furrow yield bump results from the seed roots encountering the fertilizer very early. Because of the risk of starter burn, in-furrow rates must be limited to reduce the potential harm from putting too much salt around the seed, which could affect germination and ear count. Rates can be higher when applying starter outside the furrow and still reach the plant for early uptake of phosphorus.

Ferrie and his crew also tested the relay effect — the combination of in-furrow and 2x2. The idea is to capture the immediate benefits of in-furrow starter yet have the staying power of placement a little further from the seed to keep the corn happy until knee-high stage. The plots average a 10 bu. to 15 bu. per acre boost with dual placement.

In regard to nitrogen, it’s important to consider the overall nitrogen program, not just the amount applied in a starter fertilizer.

At banding, the test plots have observed the same efficiencies with nitrogen and phosphorus.

”From the plant’s perspective, banding 60 lb. per acre of nitrogen acts like 120 lb. per acre broadcast, so banding nitrogen on the planter is a great way to manage the carbon penalty on the front end,” Ferrie explains. ”It keeps corn happy and satisfied until sidedress or anhydrous is available.”
One application method Ferrie recommends for nitrogen but not phosphorus is dribbling on the ground behind the closing wheel.

“Our tests show that’s not very effective for phosphorus because the nutrient moves very little in the soil ,” he says.

When applying starter in-furrow, don’t forget about the risk of starter burn. To avoid, limit in-furrow rates to reduce the potential harm from applying too much salt around the seed, which can affect germination and ear count, Ferrie explains.

In heavy soils in central Illinois, farmers use a 10-34-0 poly fertilizer to avoid starter burn. In coarse soils, Ferrie says you might have to go with a higher cost, low-salt starter with potassium hydroxide or sulfate. The compounds are not a salt, so they’re considered safer and allow for higher rates in-furrow.

“Low salt starter fertilizers open the door to new possibilities in-furrow, but they don’t guarantee you avoid starter burn,” Ferrie says. “Make sure the jump in fertilizer costs can be made up in yield.”

Across all Farm Journal Test Plots in central Illinois, yields consistently show the correlation to starter response and pounds of phosphorus applied. The higher amount of phosphate applied closer to the plant, the higher the response.

When you adjust the phosphate amount in your starter fertilizer blend, don’t forget to reduce the amount in other applications to maintain your total goal, Ferrie says. For example, if you apply 10 gal. 7-22-5, you will need to pull back 50 lb. of DAP.

The right rate goes hand in hand with product and placement. As mentioned, you will see bigger responses with higher rates of starter but you can only go so far without impacting the seed. That’s where placement comes in.

If you’re concerned about cost, consider a premium starter at a lower rate or a good grade but cheaper-priced starter so you can apply more pounds. 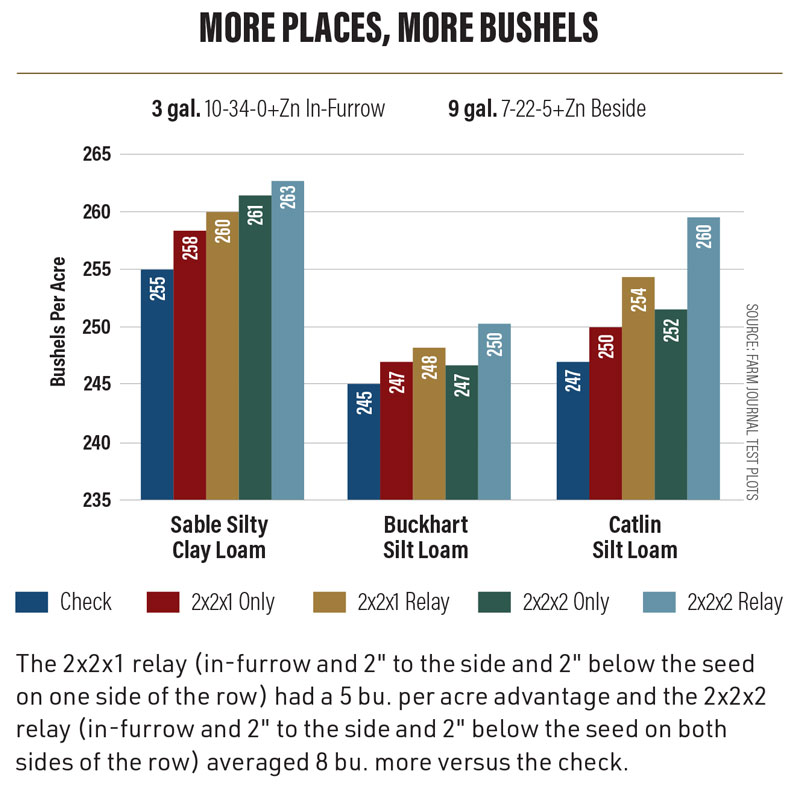 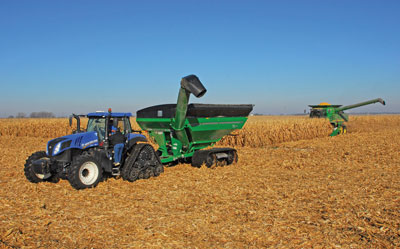 Because hybrids flex differently, their response to starter can vary. The 2018 and 2019 yield responses in the starter plots were lower than expected on average, says Matt Duesterhaus, who works with the Farm Journal Test Plots. “It could be due to the particular hybrid, which flexed more in depth. That takes place later in the season after pollination versus flexing in length, which happens in the middle of the season, and girth, which happens prior to the V6 stage,” he explains.

Thank You to Our Partners

Complaints Weigh on Future of Dicamba

Outdoors On The Farm Explores Pheasant Hunting, Conservation In SD