Crop Progress Preview: How Much Has Been Planted?

The U.S. corn planting pace this year has been one for the record books, as 2019 marks the slowest pace in USDA records dating back to 1980. What will today's progress be? ( AgWeb )

The U.S. corn planting pace this year has been one for the record books. In fact, 2019 marks the slowest pace in USDA records dating back to 1980.

How many acres of corn and soybeans were planted in the last week? The grain markets are bracing for today’s release of the Crop Progress report, says Paul Georgy, president and CEO of Allendale and an AgWeb.com blogger.

Some areas of farm country and the Corn Belt did have some dry weather over the weekend, says Joe Vaclavik, founder and president of Standard Grain and an AgWeb.com blogger.

“Portions of Iowa, Illinois, Ohio have been dry for the last three or four days, although we certainly saw some scattered showers,” he says. “Drier weather was also seen in some portions of North Dakota, South Dakota.”

Today’s planting progress numbers are a big guessing game, Vaclavik says. “It seems like that maybe progress was accelerated here over the weekend, so I don't know where the planting number for corn will come in today—maybe 70%, maybe 75%? I don't know, it is very difficult.”

Late-spring progress numbers are even more complicated to predict. Will farmers continue to plant corn, switch to soybeans or take prevent plant on certain acres?

“It’s tough to say who is going to take prevent plant, who is going to plant corn during the first and second week of June and risk lower yields in less than ideal conditions,” Vaclavik says. “I don’t know what farmers intend to plant. I don’t know USDA does either. That’s the big wild card.”

Luckily, the 6-to-10-day precipitation forecast is calling for drier conditions. 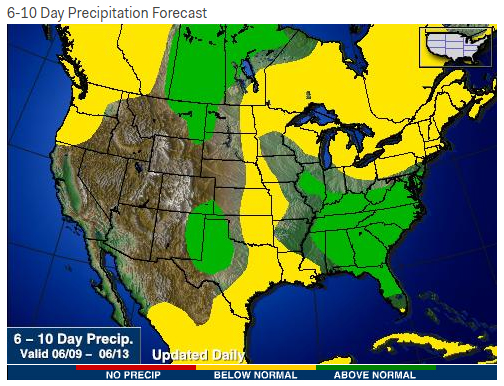 “Most forecasts that I have seen in the past 24 hours appear to have conditions, at least for the upper Midwest drying out some and no doubt,” says Dan Hueber, general manager of The Hueber Report and an AgWeb.com blogger. If that is correct, we will have planters rolling wherever possible.”

The million, or rather billion(s) of dollars question is, Hueber says, have prices risen high enough to provide the incentive to plant corn beyond the norm?

“Of course, in certain circumstances, no price will be high enough as it will be physically impossible,” he says. But I suspect with new crop prices around or above 4.00 for many, that answer more often than not will be yes.”

Today’s Crop Progress report will be released at 3 p.m. CST. Following the release, check out the AgWeb’s planting maps for corn and soybeans to see a visual representation of the data.

Watch for these Corn and Soybeans Pests

Where’s the ‘Garden’ this Year?

Soybeans May Be the Buoy Corn Prices Need
4

How do You Manage the Water on Your Farm?