In Celebration Of Ron Farrell

With nonstop energy, a navy sport coat and a gold “Attitude” pin, Ron Farrell shook hands, made friends and helped mold a considerable footprint (and set of leaders) across the agricultural industry. Name a significant milestone in the business from the past 30 years, and Farrell was either in the room or influencing the process along the way.

Champion of ag retail: After a career that spanned roles as a manufacturing rep, wholesaler, ag retailer and farmer, Farrell retired and formed the ultimate career capstone: Farrell Growth Group.
“I had an enormous regard for what went on between the lines,” says Steve Watts, a partner at Farrell Growth Group. “It was the way he approached things with people and the way he integrated different points of view without losing his way in terms of what he wanted to accomplish.”

At Farrell Growth Group, he synergized industry experience with a thick Rolodex to form the AgExcellence and CoExcellence industry peer groups.

“He always had the retailer at heart. He wanted to see independent retailers succeed,” says Dan Frick, a founding AgExcellence member and CEO of Frick Services.

“One of the things I learned from Ron is you don’t just ask questions to chat ... you ask a question and listen. Ron would digest what you said and piece together the rest of the puzzle. He was a great listener,” says CoExcellence member Dave Coppess, executive vice president of sales and marketing at Heartland Co-op.

Additionally, Farrell was an adviser in more than 100 mergers and acquisitions in the industry.

Elevating the professionalism of agronomic advising: Farrell is named as one of the early visionaries in establishing the Certified Crop Adviser (CCA) program 28 years ago, and he served as the national board chair in 1995. Luther Smith, director of the program, explains Farrell thoroughly supported creating an accredited program for agronomists across ag retail. Today, 13,500 CCAs work across North America.

Adoption of precision ag: Twenty-two years ago, Premier Crop Systems was founded as a data management platform for ag retailers to use in managing farmers’ data. It was a heavy lift—particularly at that time—but Farrell saw digital ag as the future and worked to create a solution needed in the industry.

Kelly Farrell, his daughter and partner at Farrell Growth Group, says, “He was constantly thinking, and his mind was always running toward what’s best for the industry. He had the gift of being a dreamer and a strategic thinker.”

Mentoring leaders: Farrell’s positive attitude and optimism for agriculture lives on in the people he invested his time in.

“He was engaging and so inclusive that he just found people,” Watts says. “It was just his perspective that every day brought new possibilities, and those possibilities ended up intersecting.”

Ag retailer Amy Asmus says, “He never asked for your opinion unless he was willing to listen to it. He had a way of loosening and then morphing ideas from what he thought to what he heard to what he thought should be done. He wouldn’t tell me what to do. He’d ask me a million questions until I figured out what I needed to do. We have to carry on that theme of collaboration he brought to everything he did.”

“There is not a week that doesn’t go by and I’m dealing with something difficult, and I pull back, and Ron’s words would remind me to be optimistic and have a good attitude. Because simply, you can’t solve problems unless you do that,” Frick says.

At the beginning of 2020, Jim Farrell joined Farrell Growth Group after a 34-year career with Farmers National Company. Jim believes his brother Ron’s greatest legacy will be how he championed the ag retailer. And Jim says he will work to serve ag retailers by helping them analyze the changing landscape of ag and position their companies for the short-term challenges while having an eye for the future. 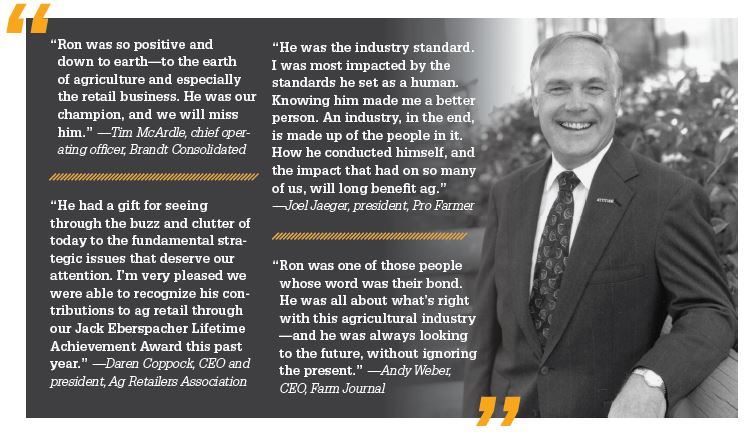 Pork Exports: Light at the End of the Tunnel
4

Take Care of You: 3 Simple Tips to Get Your Health on Track