AI technology has jumped from theory to design to farmland. ( Photo by Chris Bennett )

The age of artificial intelligence (AI) in agriculture is in motion. Automated planting and harvesting, or unmanned vehicles for cultivation and soil sampling, as well as robotic drone activity, crop scouting, and far more—AI technology has jumped from theory to design to farmland. In short, farming’s driverless machines of tomorrow are already at work in the rows today with the implementation of AI meaning a significant shift on many farm operations in the near-future.

Keeping pace with technology, equipment updates will be a consistent necessity, Fulton projects. “As automation and AI mature, it’ll be like having a cell phone and every few years you’ll want to upgrade, because the machinery capabilities will constantly improve. Again, at some point there is going to be a switch to lease and services provided.” 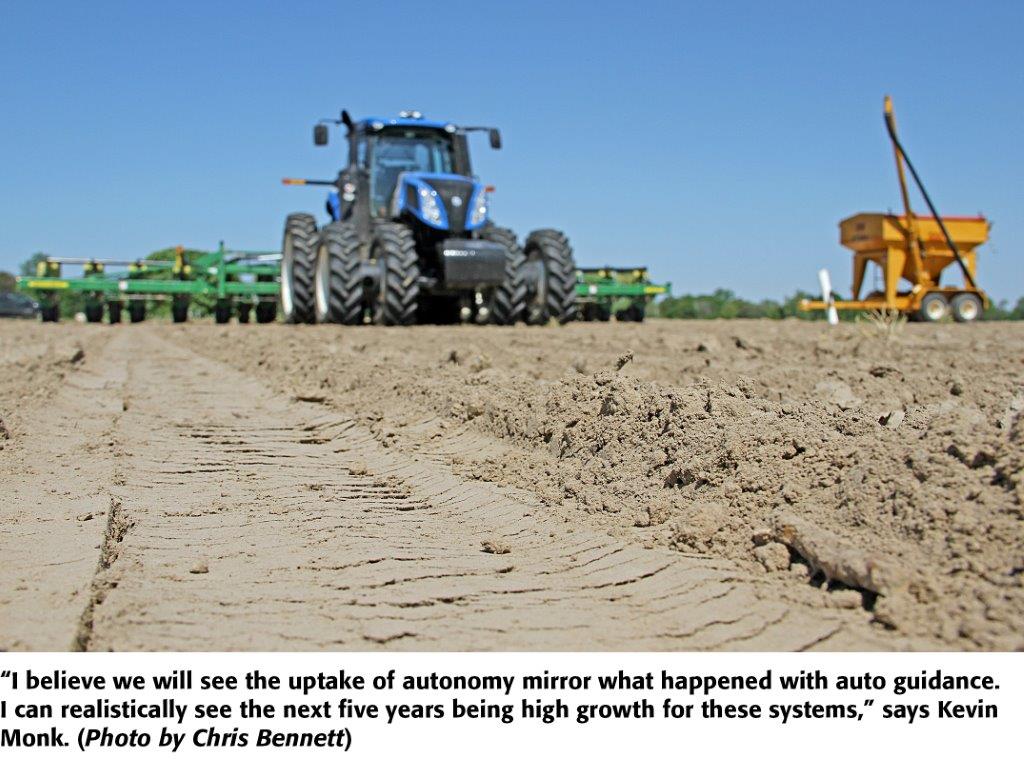 Fulton currently sees significant progress in drone technology for specialty crops, with a direct link to additional use in row crops. “Drones can do so much in scouting, and now we’re seeing drone sprayers capable of improving coverage in field areas with high weed pressure while completing crop protection applications efficiently. But there’s more beyond drones, such as robotic cultivators and weeders.”

Adios to the Introduction

Kevin Monk, ag tech consultant and owner of The Monk Approach, LLC, echoes Fulton’s position on the prospective shift in automated machinery ownership. “The mentality of growers changes to become more about the machine just getting the job done. Once this mindset changes, the grower is not concerned about owning the machine as much as just making sure they have availability of the machines on their farm when they need them, especially since paying for usage of a machine can be at a lower cost and not tie up capital on machines that are only used for a short window.”

How quickly does Monk see automation taking hold in mainstream agriculture? Adios to the intro and pay attention to the next five years, he says: “We’re already past the introduction phase and I believe we’re rapidly going to see increased adoption. This spring, we saw companies offering planting as a service using autonomous machines, offering kits for grain carts, others focused on spraying, and some working on tillage. I believe we will see the uptake of autonomy mirror what happened with auto guidance. I can realistically see the next five years being high growth for these systems.”

In North Dakota, the Grand Farm aims to become the world’s first fully autonomous agriculture operation by 2025—and serve as a laboratory for entrepreneurs and ag tech companies. Grand Farm program manager William Aderholdt believes automation enhancement will put a shoulder to the door of farmer access and open an agricultural era conducive to farms of all sizes, buoyed by technological innovation. Automation and smaller vehicles, he proposes, will lower the entry barrier across the agriculture industry—and essentially revive small farms. “The cost of entry is going to drop; you won’t have to purchase an expensive combine. You’ll be able to run a small combine, about the size of a car, across your operation 24 hours a day with no driver costs.”

Labor availability and expense remains a massive issue in agriculture, but automation will be a significant remedy, Aderholdt adds. “For example, we’re going to see operations tended entirely by individual and single-family teams assisted by smaller machines. This is coming fast and the effect will be positively felt in rural communities as a way to build local economies and drive people back into these places.”

For more information on agriculture automation and robotics—see John Fulton, The Monk Approach, LLC and the Grand Farm.

PREV
Want To Diversify? Ask Yourself These Questions.
NEXT
Farm Bankruptcy Filings Are 24% Over Year-Ago Levels

More Hogs Eat More Corn — What Does That Mean for USDA Numbers?
5