Tyne Morgan
June 28, 2019 02:06 PM
USDA's June acreage report showed lower acres across the board, but a surprise increase in corn acres from June Crop Production Report. While USDA will re-survey acres, analysts say there are some takeaways from the report. ( Farm Journal )

The hype leading up to USDA’s June Acreage Report was met with a bearish reaction in corn on Friday. USDA published a corn acreage number of 91.7 million acres. The farmer survey results were higher than the acreage number USDA released in its last crop production report, coming as a shock to the trade.

However, analysts say the late-planted crop means acreage surveys as of June 1 are already out of date.

“This report probably never should have been published due to the extenuating circumstances,” said Arlan Suderman of INTL FCStone on U.S. Farm Report.

USDA admitted the numbers are out of date. Buried in Friday’s report was USDA announcing it will resurvey corn acres in 13 states, planted acreage of soybeans in 14 states and cotton in Arkansas. Those findings will be released in August. 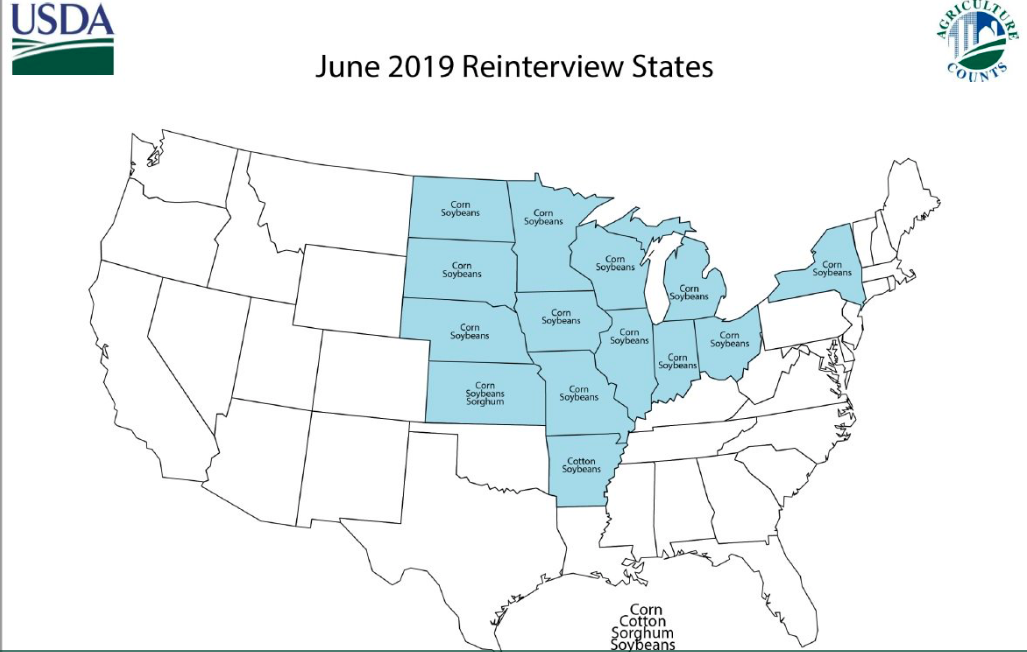 Even though Friday’s report will be resurveyed, Suderman said there are some key takeaways from Friday.

“It does still tell us some things,” said Suderman. “It kind of confirms what we'd been hearing in late May that a lot of farmers saw what was coming, and they said, ‘if we can possibly get corn acres in, we want to get corn in at the expense of soybeans.’ They were returning soybean seed, where it was drying up to do so, and this survey tells us that was pretty much true across the Midwest. Now, it never quit raining, so they had trouble getting those acres in, but it probably makes it difficult to see prevent planted of 10 million to 15 million. I still feel pretty good about my 7 million prevent plant acres.”

Suderman said USDA will reveal the number of acres filed to FSA as “prevent plant” in August, the same month USDA said it will release its resurveyed acreage report. Matt Bennett of AgMarket.Net said the report on Friday should be considered another intentions report, versus an actual acreage report, because so many farmers were still planting after June 1 passed.

“In my opinion, the way that looking at it, yes, 91.7 million acres indicates that there's a lot of folks who wanted to go ahead and plant corn, and that's exactly what the market was telling you to do on June 1,” Bennett said. “The fact of the matter is, though, we do have a significant amount of acreage that did not get planted. We know that.  How do we quantify that is going to take quite a bit of time. I'm with Arlan; I'm still in that 6 million to 7 million acres of prevent-plant camp. Our team at AgMarket.Net has been thinking that all along. That being said, I do also think that your harvested percentage is going to be lower than normal by a fair amount. This acreage number is going to look drastically different as we move forward.”

The report caused corn to close limit down on Friday, shifting the bullish momentum behind the corn market for more than a month, and now prompting some producers to question if they missed the highs of the corn market this year. However, Bennett thinks there are factors on the horizon that could impact the price of corn.

Bennett said with less corn on hand, the carryout could also be trimmed. In addition to that, less than prime planting conditions could eat into yield, a story that’s not being revealed in USDA’s reports yet.

“This crop is in trouble in certain areas,” said Bennett. “Yes, we got some acres planted, that were planted in tough conditions, so the conversation moving forward is going to be more about yield than anything, and I think that your national yield at 166 [bu. per acre] that was printed on the June report is still plenty high, in my opinion.”

Suderman agreed with Bennett and thinks USDA could continue to shave off the national corn yield, especially considering the conditions in which much of the crop was planted.

“USDA dropped its objective field surveys for August this year, because the crop usually isn't very mature,” Suderman said. “That may be the case in September this year. We're looking for cool weather to return in July. That's going to really delay things and make it tough to get a yield number on this crop for some time. I'm at 165 for my yield. I think that's probably the top end, and I just keep inching it lower.”

Why COVID-19 Relief Should Include America’s Agricultural Fairs
4