Almost 30 years after Saddam Hussein put a match to 600-plus Kuwaiti oil wells during the Gulf War, Ed Hain lays claim to ending one of the most environmentally destructive war crimes ever recorded. ( Photo credit: Edmund Hain )

Long before the sun peeked over Nebraska’s eastern horizon in February of 1991, Ed Hain’s internal clock struck 5 a.m., and the cornhusker farmer rose from his bed, shuffled into the living room, and tuned into a television station broadcasting the apocalypse. As Iraqi troops beat a chaotic retreat while Saddam Hussein put a match to Kuwait’s prodigious oil wells and set fire to a crude-rich landscape during the Gulf War, a correspondent assessed the expanding environmental crisis and predicted the fires might burn for several years. Fixated on geysers of flame and black smoke blotting out the sun, Hain ignored the reporter’s words and leaned toward the set: “You know, I think I could put those fires out.”

Almost 30 years after Kuwait’s 600-plus oil fires were extinguished, ending the immediate effect of one of the most environmentally destructive war crimes ever recorded, Hain, 85, lays claim to an unheralded, but significant role. Yet, the Midwest grower winks at history, satisfied with his place as a forgotten historical footnote: “I guess it was just my contribution to humanity, but that’s not too bad for a Nebraska farmer.”

Prior to a career spent farming 800 acres in Nebraska’s Butler County, Hain served in the Navy, completing fire school and operating as a crash crew firefighter. “Fire needs oxygen, heat and fuel in vapor form. Take one element away and the fire is gone. That sounds simple on paper, but I learned what all that means when applied to explosions and accidents, and didn’t forget it.”

Never content with convention, Hain returned to his farmland and consistently tried maverick corn-growing strategies. High-low rows or box blending, he searched for the optimal means to gobble sunlight, settling on alternating strips as the “father of six-row corn” in 1975. By 1979, Hain had all his corn acres in six-row strips (separated by strips of soybeans), except for a few check plots as a measuring tape. The agronomics, according to Hain, were relatively simple. Using a 12-row planter with the outer three rows tossed off on both sides, Hain planted corn at 34,000 seeds per acre on the outside rows and 26,000 seeds per acre on the inner rows. Roughly a week later, he came back and planted soybeans. 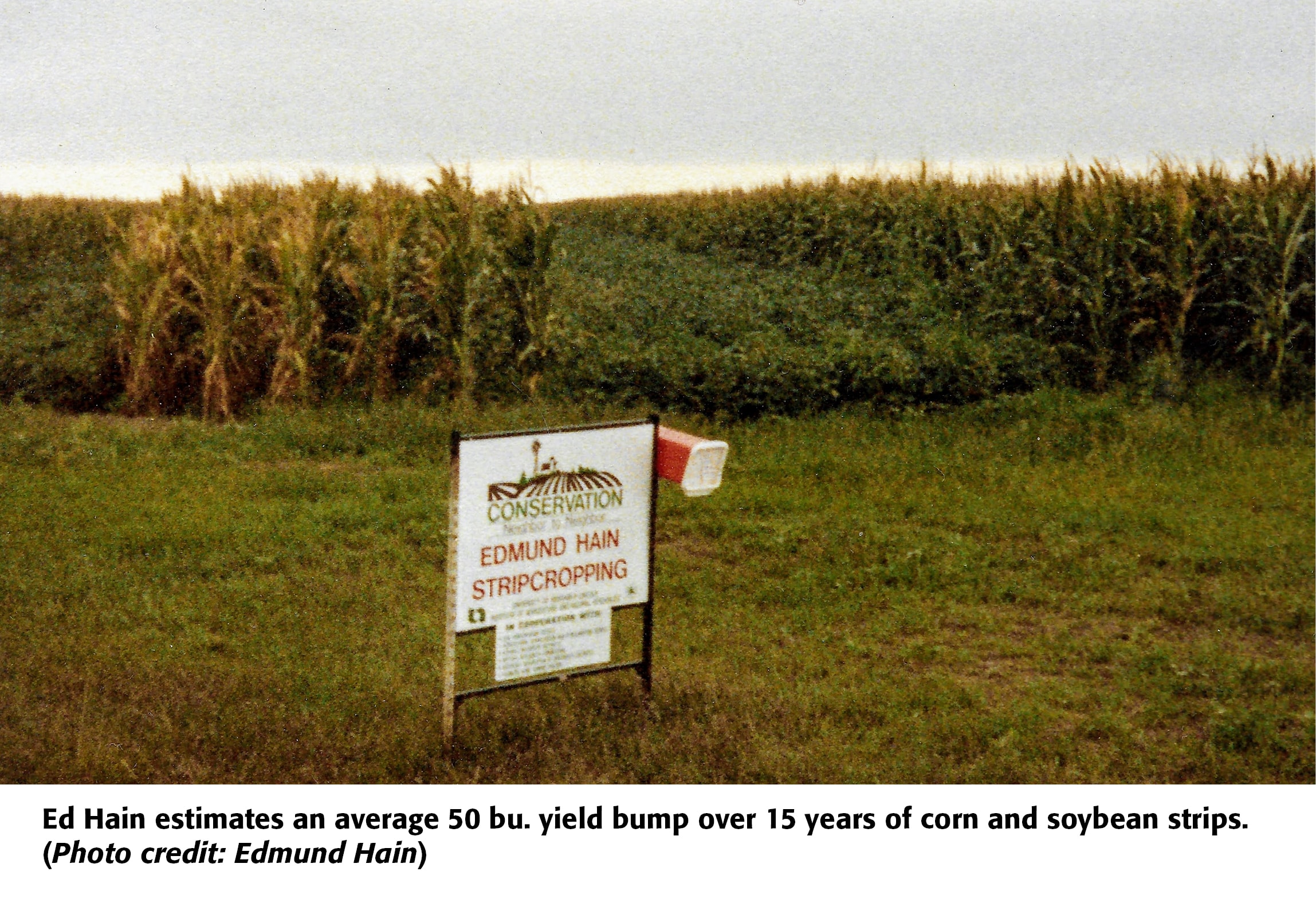 How big was Hain’s corn yield jump over time? He estimates an average 50 bu. yield bump over 15 years of strips. In 1992, a major company offered Hain a lucrative seed corn contract and he transitioned from strips to solid seed corn. “I changed strictly due to contract money. If it wasn’t for the enticing contract, I’d have planted six-row corn until the day I retired (2008). I’ll never forget the size of those ears on the outer rows. Almost every stalk on those outer rows had two full ears.”

“I was never smarter than anyone else, but I was always ready to approach a problem from a different angle.”

Case in point: On a cold February morning in 1991, as scorched earth flashed across the television screen, Hain’s mind flashed to the irrigation pivots dotting Nebraska farmland. For three days, he sat at his kitchen table, scribbling on a pad as diagrams and calculations took shape and a contraption emerged. Confident of his creation, Hain tore the sketches from the pad, climbed in his car, and drove to his highest point of access on the government ladder—Nebraska state senator in Lincoln and personal friend Loran Schmit. “I’d have gone right to the king of Kuwait, but they wouldn’t have let me in the door.”

Hain placed the sketches on Schmit’s desk, followed with a concise explanation, and waited for a response. “When Ed Hain tells me something, I listen. His word is all I need to know,” recalls Schmit.

For several seconds, Schmit stared at the sketches, according to Hain, and then looked across the desk: “Sen. Schmit said, ‘This just might work,’ and called his receptionist to ask for some numbers, got people on the phone, talked for 20 seconds, and then handed me the receiver.”

“Over the course of a few phone calls, I talked to an irrigation well drilling outfit and a pivot manufacturer both working in Kuwait. Right there on the phone, I told them exactly how to build it and what to do. I told them the beautiful thing is you can go from well to well and just snuff the fires out.” 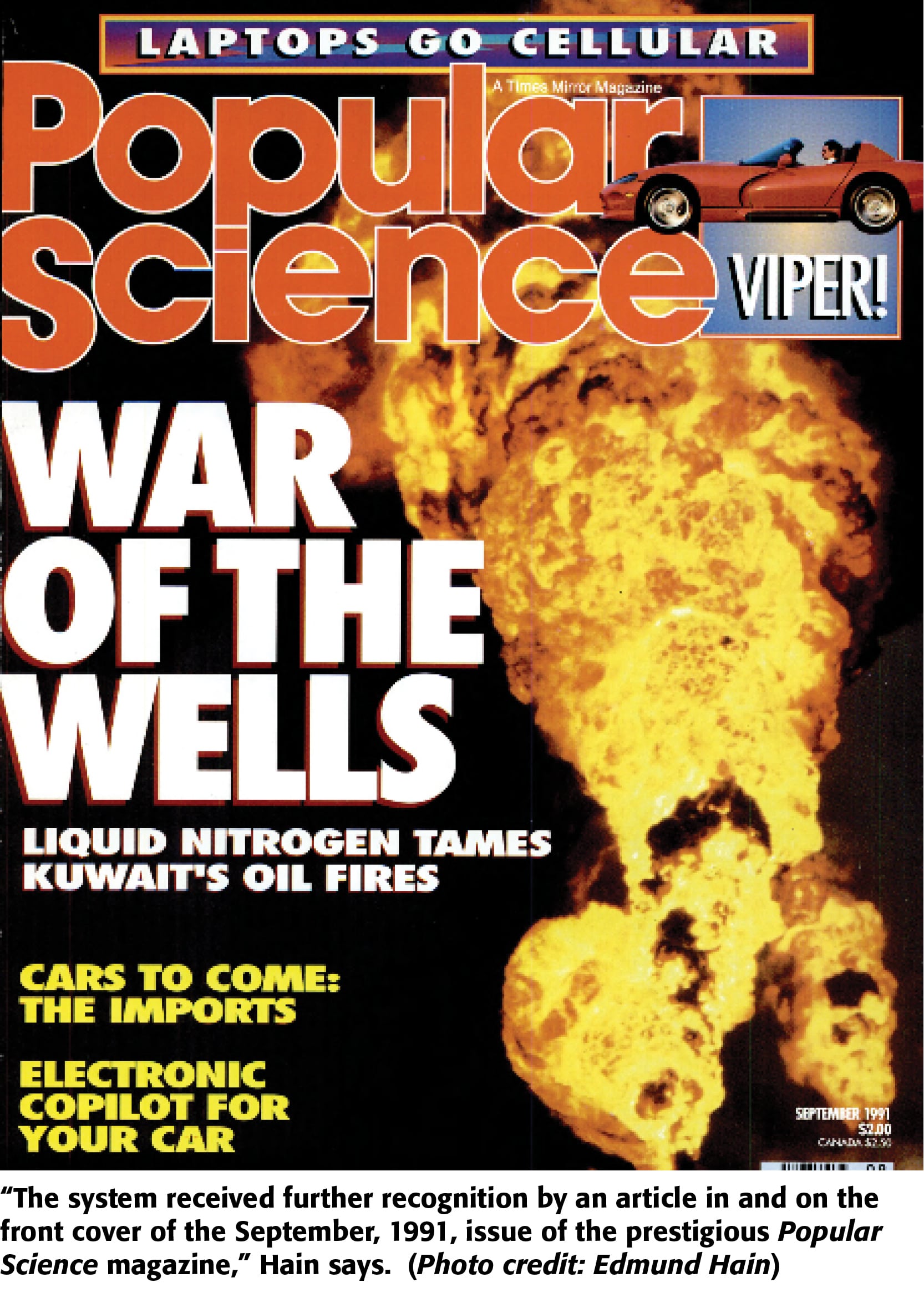 Simplified, Hain’s farm-derived, fire-eating device was a 30’ long culvert (24” diameter), mounted on the end of a wheeled irrigation pivot section, and connected to a tank of liquid nitrogen. Vertically oriented, the culvert’s bottom end fastened to a 3” pipe that connected with a tank of liquid nitrogen. “With a dozer, you position the vertical culvert over the geyser and move the fire well above the re-flashing area of the hot metal below. Then turn on the liquid nitrogen that’s only a few degrees above absolute zero and it removes all the oxygen, sucking away the heat and fire.”

Roughly 10 days after the phone calls, Hain flipped on the morning news and grinned in surprise as he listened to a report. “It was the same newscaster and he announced, ‘We have a new way to put out some of the oil fires in Kuwait that uses liquid nitrogen,’ and then he finished with my exact words:  'The beautiful thing about this system is you can go from well to well and just snuff the fires out.'"

“The newscaster then went on and they demonstrated the system by putting out an oil well fire right there on TV.  It worked beautifully. The system received further recognition by an article in and on the front cover of the September, 1991, issue of the prestigious Popular Science magazine.”

The fires burned for roughly 10 months and many analysts estimate the number of barrels burned at approximately 5 million per day.  In 2002, over a decade after the last Kuwait oil well fire was extinguished in November 1991, Hain received a letter from Schmit acknowledging his unique idea and the benefit it provided in a time of crisis.  Schmit wrote: “It was good to see you again and reminisce about old times. I remember very plainly the time you came to visit me in my office and discuss your remedy for extinguishing oil well fires. It is too bad that when I contacted those companies and had them contact you about your solution that we did not work out an arrangement where you might have shared in the income from your idea.”

“It does not surprise me that corporate America would take an idea from a Butler County farmer and claim it as their own. It is unfortunate that we both treated the idea as casually as we did. I suppose it is too late today for you to recoup any income from the idea and I suppose it is a small satisfaction to you to realize that others have benefitted substantially from your idea. Nonetheless it does demonstrate that there are intelligent people out here in the Midwest who can find solutions to the serious problems.”

“It was good to see you again. The next time you have a good idea, let’s be a little more careful who we tell. Sincerely, Loran Schmit”

As for Hain, he takes the episode in stride, content with his lot. “I helped the Kuwait fire situation to get dealt with faster and sooner than anyone predicted. Like I said to Sen. Schmit, ‘Let’s just call it my contribution to humanity.’”

Get Off to the Right Start with Starter Fertilizer

Analysis: Corn and Peanuts Could Be Biggest Acreage Gain In Southeast

I’m a Drover: Regenerative Ag with a Twist
3

Maryland Bill Would Limit What Foods May Be Labeled ‘Meat’