“A pretty good corn crop” is how Mark Bernard describes what he’s seen on Wednesday, the third day of the 2020 Pro Farmer Crop Tour.

“We’re starting to bump up over 200 bushels fairly consistently here in Illinois, and we're also running into some moisture in the soil which we were having a rough time with over in Ohio and Indiana,” says Bernard, who is working the eastern leg of the tour as a scout.

The eastern leg of the tour started in western Ohio and worked its way across Indiana on Tuesday. On Wednesday, scouts on the eastern leg are in Illinois and eastern Iowa.

Bean yields in Illinois are not as solid as the corn, says Bernard, a certified agronomist from southern Minnesota. This is Bernard’s 17th year to work the crop tour.

“We are just starting to touch it,” Bernard replied. “We just crossed I-80, and it's just like the light came on and you go, ‘Oh, there it is.’ We're starting to see some of the stuff that's goosenecked and ripped up pretty good—not flat or anything like that yet— but it definitely is going to make it more of a challenge (to estimate yield) as we go along.”

On the western leg of the tour, Sherman Newland, a farmer and risk manager from Illinois, says soybeans in South Dakota are impressive.

“I actually talked to a local farmer when he stopped by the field, which was his, and he told me, ‘This is going to probably be our best year we've ever had in South Dakota,’” Newland says.

Newland says he proceeded to Nebraska on Tuesday afternoon and saw some exceptional corn crops.

“At almost every stop, the crop was over 200 bushels,” he says. “We had some going to 235 and to 242. It was really heavy corn—big grain, heavy test weight corn there in Nebraska.”

Newland moved into western Iowa on Wednesday morning. He stopped initially in Dallas and then moved to the Boone, Iowa, area. At the first stop, scouts estimated 157 bpa and then 209 bpa at the second stop. All along the way, the corn was down or leaning heavily, he says.

“We've been on our hands and knees getting underneath the corn, trying to get an accurate count,” he reports. “From what I've seen, quite a bit of it could still be harvested. I know from past experience that you can get a corn head under some of this corn, if you’ve got a reel. You won’t like it, and it's not going to be fun but it could be harvested.”

On Tuesday, Ted Seifried says most of the corn he checked in northern Nebraska was irrigated but not particularly strong. “It wasn't that fantastic. I think our high was 235, but a lot of 202s and 208s, when we thought we’d see a bit better than that. According, you know, from what we're hearing from Sherman and those guys, it sounded really great, but I was kind of not impressed with the irrigated crop in Nebraska."

Wednesday, Seifried is scouting fields along southwestern Iowa and says crop conditions in the area vary a lot. “It’s a case of the haves and have nots,” says Seifried, vice president and chief market strategist at Zaner Ag Hedge, Chicago. “You’ll go through fields and get a 208 bpa yield check, go two miles and get a 130 bpa yield check.”

Flory asked Seifried to put some market perspective on what he and other scouts are seeing. Seifried addressed crops in South Dakota.

“I think the market needs to take the South Dakota numbers with a grain of salt,” he says, because weather conditions between now and harvest could still significantly boost or hurt yield potential.

“I’m also going to say that the market focus is now beginning to shift more from production into demand, with China buying every day. They bought another 192,000 metric tons of soybeans today,” he adds. “At some point, I believe we need to find China's price tolerance.” 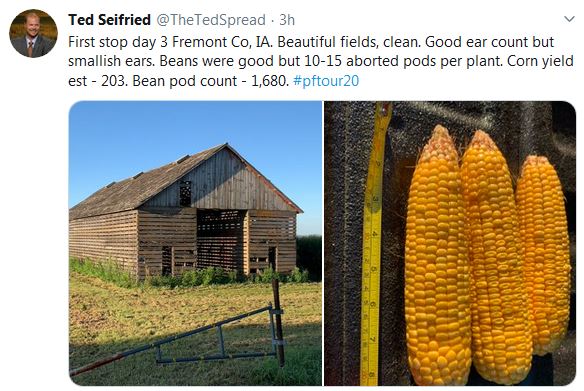 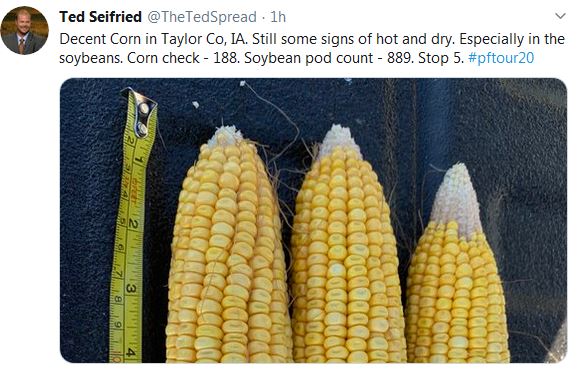